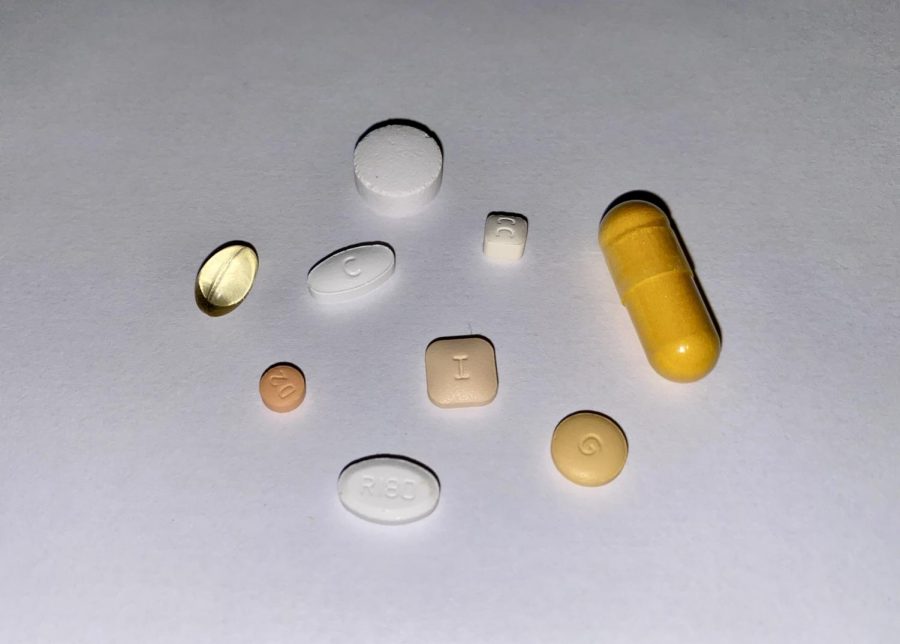 Medicated: This picture is a look at the medications and supplements I take everyday.

Fibromyalgia is a condition that is made less intolerable by medication, but never goes away. Over the past year and a half, I have taken a variety of medications.

My experience started with Cymbalta, generically known as DULoxetine. When I first went to my primary care physician with my concerns, which I discussed in week one of my column, she prescribed me Cymbalta, even though she couldn’t officially diagnose me.

Cymbalta takes about a month to build up in the body, so my primary care physician wanted to get a head start before I saw the rheumatologist. You may be asking yourself, “What exactly is Cymbalta?”

Cymbalta is an antidepressant, more specifically a selective serotonin and norepinephrine reuptake inhibitor (SSNRI). Although there is little understanding about fibromyalgia, experts believe that it involves the misfiring of nervous system signals. Cymbalta works by increasing the amount of serotonin and norepinephrine, thus suppressing feelings of pain. Cymbalta, like many other drugs, is FDA approved to treat fibromyalgia.

I was on Cymbalta for a little over a year. The medication provided very inconsistent relief from my everyday discomfort, although there was a small improvement. I made the choice to stop taking it because I felt that the side effects were not worth the benefits it provided. Taking Cymbalta made me have dry mouth, sweat constantly and gain significant weight.

What the doctors won’t say when they prescribe Cymbalta is what a terror it is to discontinue. I spent several months tapering off of it, from 60 mg to 40 mg to 20 mg to nothing. Even though I went as slow as possible, it was still a terrible couple of months. I experienced dramatic mood swings, extreme fatigue, lack of motivation, sharp nerve pain, dizziness, an overall feeling of being disengaged from everything around me and I would cry about anything and everything. I was not myself.

A few months after I was diagnosed with fibromyalgia, I was also prescribed a drug called Nortriptyline, a tricyclic antidepressant, to help with my pain and sleep problems. I felt like this prescription did me some good, but not enough to outweigh the side effects, which were hard to distinguish from the side effects of Cymbalta. I tapered off of Nortriptyline around the same time as Cymbalta, but it was much easier to discontinue.

Those are the main prescriptions I have been given for fibromyalgia, but there have been many others to try to treat my migraines and allergies.

For a while I was taking Propranolol, a beta-blocker that can be prescribed to treat migraines. I eventually went up to 80mg, but could tell no real difference in my symptoms, so I ended up tapering off of it as well.

My neurologist now has me on an anti-seizure drug, Topiramate, also known as TOPAMAX, to try to reduce the number and severity of my migraines. It has been a few months now and once again, I can’t find a clear benefit from the medication, but I do experience side effects from it such as numbness and tingling in my hands and feet.

I currently take not one, not two, but three allergy medications year round: Zyrtec, Famotidine (Pepcid) and Montelukast. Despite this line up, I still experience pretty bad allergies.

The last medications that I have not covered are my prescribed “rescue” medications for migraines. I have a prescription for Tizanidine, which is a muscle relaxer, and Diclofenac Sodium, an NSAID more potent than Ibuprofen. Tizanidine is often my saving grace, but I usually feel no difference after taking Diclofenac Sodium.

Okay, enough Rx talk. If you see a doctor for a condition, you’re probably going to be prescribed medication, but should that really be the first response?

In my own experience, these prescriptions just come with side effects that might even require another prescription to manage. I’m not saying medication can’t work. I know people who take Cymbalta and they love it, but my own experience was a very negative one, so much so that I am now trying to avoid prescription drugs as a treatment for my fibromyalgia altogether.

I am currently trying to manage my pain with full-spectrum CBD and a nutritionist who specializes in chronic pain and auto-immune diseases.

There are many more FDA-approved drugs I could take for my fibromyalgia symptoms, but for now, I am trying to manage my condition the natural way.