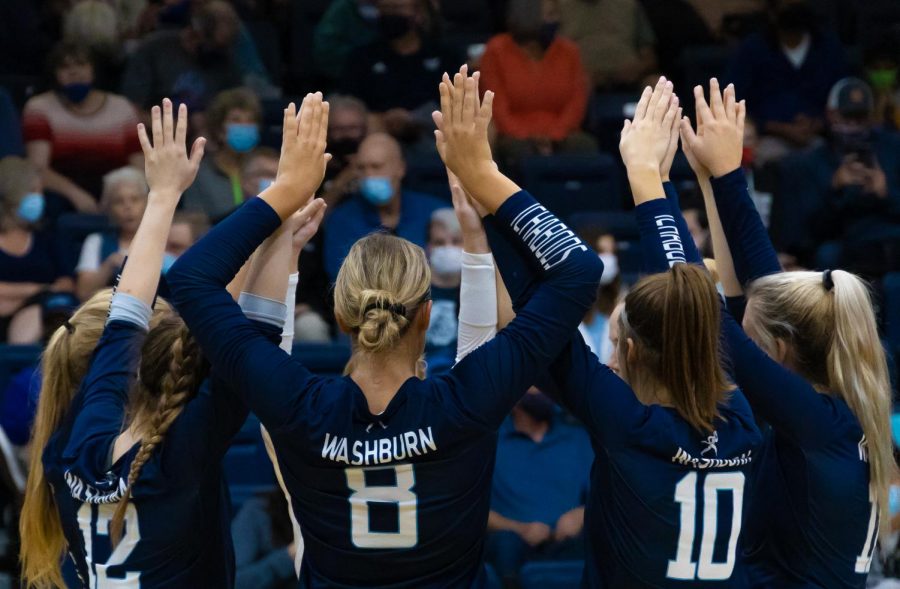 Huddle up: The Ichabods come together for a huddle during a time-out in the match against Emporia State on Sept. 21, 2021. Washburn took all three sets of the match.

After an undefeated weekend that vaulted them up to number one in the American Volleyball Coaches Association poll, Washburn Volleyball was back in action on Sept. 21, as they welcomed Emporia State University to Lee Arena. The Ichabods entered the match with a 10-1 record on the season, losing only seven sets all season, while the Hornets entered the match at 2-7, losing two in a row.

Washburn got started early on, taking a commanding 7-2 lead and was always on the attack. Over the next nine points the score would be the same, with the Ichabods leading 14-4, with ten points coming on kills. Emporia State would mount a comeback to bring the set to 22-16, forcing Washburn to call a timeout. Washburn would recover out of the timeout to finish the set with a 25-18 victory. Stevenson led the team with five kills in the set while senior setter Allison Sadler recorded nine assists.

In the second set the scoring was much more even early on, with the two teams splitting the first ten points five apiece. The Ichabods would create some separation after that heading into the middle stages of the match, but the Hornets would keep it within single digits this time around. A run of kills by Stevenson and senior middle hitter Allison Maxwell would give Washburn a 21-12 advantage as the set moved towards a close. Emporia State would score two in a row after that, but would fall in the set 25-15. Maxwell recorded an additional 15 assists in the set while senior outside hitter Genna Berg paced the team with four kills.

The Ichabods got off to a fast start in the third set, jumping out to a 7-1 lead and forcing the Hornets to call a timeout. The break would not stop Washburn’s momentum as they scored seven of the next nine points out of the timeout. Emporia State would counter with a five-point run of its own, including three straight service aces to make it a 16-10 set.

The two teams would trade the next ten points as the set moved into the final stages. The Ichabods would win the final four points of the set to leave with a 25-15 set win. Maxwell led Washburn with five kills in the final set, and was tops in the game with 13. Senior libero Faith Rottinghaus recorded 15 digs for the Ichabods.

The victory in the final set gave Washburn a clean 3-0 sweep for the match and moved them to 11-1 on the season overall.

Next up for the Ichabods is a trip to Warrensburg, Mo. on Saturday, Sept. 25 to face number seven ranked University of Central Missouri.