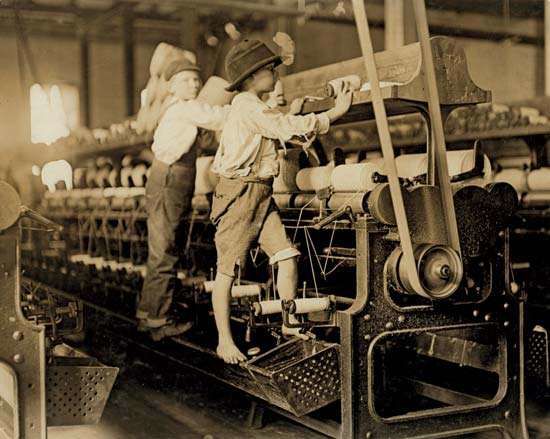 During the 1700s and 1800s when factories and power-driven machines were built, company owners found a new source to power these machines, children. While most adults work 40 to 50 hours today, the children would work 70 hours per week.

Working children who would start as early as 7 years old. They had no time to be a kid because they were forced to work in hazardous and unhealthy conditions that would result in injuries and even death.

The poor conditions for children and adults to work in led to the labor laws that were enforced during the 1900s but are still a major problem in companies today that hide their secret that still continues today in other countries.

This includes countries that make products like clothing and food for American companies. Companies choose children as their victim because children don’t realize that it isn’t normal to work under hard conditions and it’s cheaper to hardly pay children than it is to pay adults.

Certain companies that we pride ourselves over or put great value on their merchandise like Walmart, Nike, Victoria Secret, Apple, Disney, Adidas, Forever 21, GAP, Urban Outfitters, Hershey’s, Nestle, Mars, Cadbury, Kraft, Crunch and many more companies that are not featured or not as well known are using children for work.

Students comment on how that makes us the buyers of products that children slave over, feel and how child labor laws should be enforced in other countries. The top countries that still enforce child labor include Ethiopia, Pakistan, Burundi, Afghanistan, Zimbabwe, Democratic Republic of Congo, Sudan, Somalia, North Korea, Myanmar and more. These children are never taught how to read and write, and all they know is work and living in not just hard conditions geographically, but in the workforce as well.

“I didn’t know about that huge long list. I had heard about Apple but I haven’t heard of the other countries. I think it might require more communication from the people who are overseas,” said sophomore Abigail Beliel. “Obviously they do it because of money because you have to pay adults, but maybe they need more support in that area.”

Children are defenseless against the countries that implicate the rules and they don’t get a choice on whether they want to be a kid and play, or to work under dangerous conditions. Children are the victim of the adults who betray them by taking away their freedom.

Many are looking for solutions to try to solve this issue.