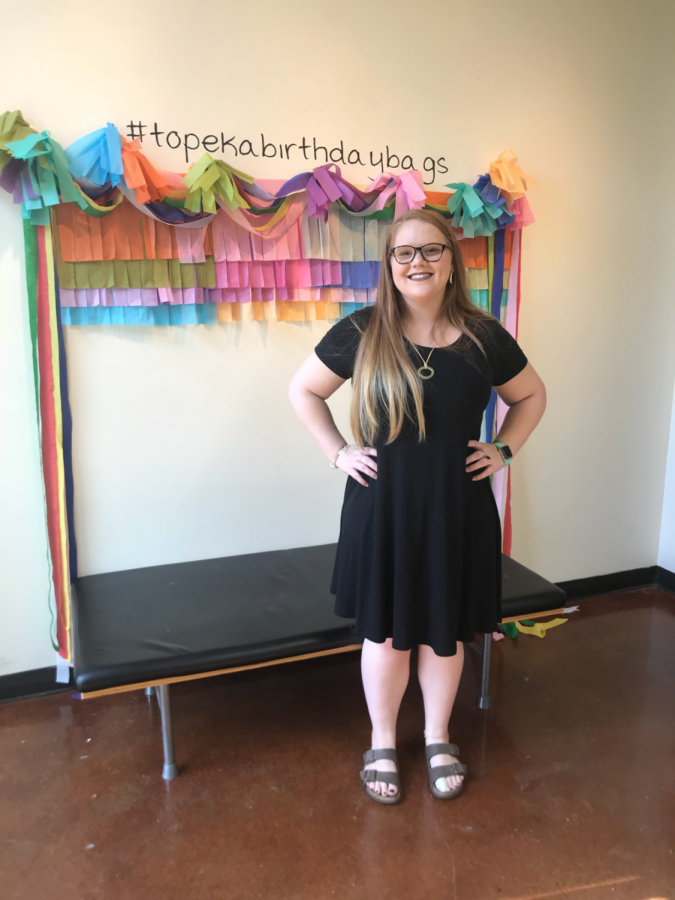 Alexandria Henderson posed in front of the sign for her creation of Topeka Birthday Bags. This project will officially debut on Thursday Oct. 11.

Henderson is a senior art major. She started her journey at Washburn University as an art minor but quickly realized that art was her passion. She has focused most of her attention on photography and ceramics, making plates, necklaces, earrings and more.

For her senior exhibition, Henderson decided to focus on something different. She chose to bring her art into the community to fit into a social practice view. Henderson borrowed an idea from the church that she attends. Three years ago they did a project, similar to Topeka Birthday Bags, to help give back to the community. She saw the way that this project can help kids and families who can’t afford a birthday party and decided to expand on the original idea.

“The box is a complete themed birthday party for kids,” Henderson said. “Cake ingredients, decorations, small gifts, all put in a decorated box and delivered to the family in need.”

There were a few obstacles to get past. Henderson wanted the boxes to have everything the family could possibly need. The cake mixes called for eggs, which are a perishable item that couldn’t be included in the box. Henderson found that you can substitute applesauce in place of the eggs to make the cake mix. She also needed a way to deliver the boxes to families in need without compromising their privacy. Henderson partnered with Doorstep of Topeka to deliver her special boxes to families in need. Doorstep helps the Topeka community by providing services such as money for rent, food and clothing, transportation, utilities service and crisis intervention to Topeka citizens.

According to Doorstep’s official website, the organization helps Topekans and our neighbors survive crises, improve their way of life and become self sufficient.

Henderson wanted to make this a project that truly involved the community. After the show, she is having an event at the church she attends, First Congregational Church. This event will allow people from the community to come and decorate the boxes with stickers, pictures and paintings before they are given to Doorstep.

“I want kids to be able to come to this event and see that they can make art, but also give back to their community,” Henderson said.

Henderson has tentative plans to continue the project by taking photos of the birthday parties created using the boxes.

The other half of her exhibition contains some of her many creations in ceramics and photography from her four years at Washburn. Most of her plates are ceramic because glass technically shouldn’t be eaten off of, limiting their usability. This is important to her when she is creating her art.

Her work is characterized by flowers and bright colors. Henderson drew inspiration from experiences in her own life to create the petaled masterpieces.

Henderson suffered from negative thoughts and depression. During this time, she used the bright colors and flowers to cheer herself up through her art. Through these emotions, her collection was born, titled “Petaled Porcelain.” The creations make use of floral designs.

“Flowers can be strong but also delicate, exactly how clay can be like, along with my personality,” Henderson said.

Henderson is currently undecided on her plans after graduation, but has began to think about graduate school as an option where she might earn her graduate degree in teaching and become a professor.

Henderson’s art is currently on display in the art building and will be shown in the reception from 5-7 p.m. Thursday, Oct. 11.