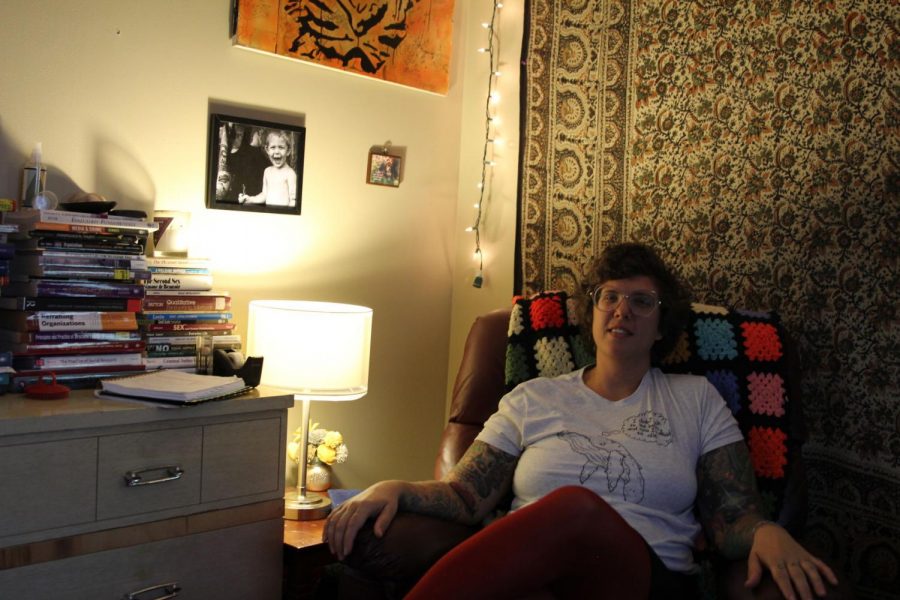 Chilling Comfortably: Erin Grant sits on her recliner wearing her existential shirt of a whale crying, "I didn't ask to be born and now I'm afraid to die."

Criminal justice professor, Erin Grant’s room is not a typical office room. With an ornate Bohemian tapestry forming the background, string lights, paintings and photos, people would think that Grant’s office was a college dorm room rather than an office space. However, the intimate setting makes it special.

“She understands that life happens, countless times a semester she is there for students that are having a hard time at home or in another class, talking them through any issue they come to her with,” said Chris Rosell, senior criminal justice major. “Grant is one of the most real professors in Washburn, as one can talk to her about anything, and she will treat every subject with care and nuance, without pretension.”

Her renowned mentorship and interpersonal skills are evidenced by her winning the Achieving Excellence Award, which is given based on nominations from students and staff. Her college career started at Illinois State University with her attaining a 0.7 GPA in her freshmen year. However, studying criminal justice elevated her to where she is now.

“I was sort of a party girl but I was also curious about what would happen to me if I got in trouble,” Grant said.

Her curiosity led her to take a general education criminal justice class with Professor Frank Morn, who would become her first mentor.

“In a class of so many people, I was just lost. I didn’t even know we had advisors, let alone that we had to make an academic plan,” Grant said.

She takes this experience into her classes, as she understands that college students are adults. Anyone who puts their best foot forward will be rewarded, even if they don’t quite reach the required level of competence.

“The course material is difficult so having my students understand even half of it is fulfilling,” Grant said. “Sometimes, I will give the benefit of doubt to a hard worker. If I know someone worked hard on a paper but the paper isn’t quite up to standard, I will give him or her another week to rewrite it.”

This hard-working attitude is present in her daily dealings as well. She wakes up between 4 to 5 a.m. and reads inspirational books, then she gets her two boys ready for school. After doing some house chores, she commutes from Lawrence to Topeka, listening to podcasts on the way. Right now, she is listening to “Sword and Scale,” a podcast about the crazed minds behind the most heinous crimes.

At Washburn, her duties range from handling emails to teaching and attending meetings. Meetings have started to occupy a significant part of her day, as she was just promoted to be the director of the masters program in her department. She is also involved in other committees, such as the Washburn Diversity and Inclusion Committee.

“I would like to do research and analyze statistics since that’s what I like most,” Grant said.

She has investigated issues like re-entry efforts, starting programs in prisons and preventing drunk driving incidents. She wants to make her classes more applicable to the real world by involving her research. One of the attempts of doing that involves her asking her students to conduct research by working with the police department.

“I like Grant’s classes because she makes them active even if the class isn’t responding. She will pick at your brain and actually make you back up your statement,” said Taylor Blue, senior forensic investigation major.

Blue also talked about how her classes have given her insight into the research world.

This cycle of waking up, tending to children and working can get mundane at times. To break that, Grant goes to the different cafes in Lawrence and even splurges on fine dining. Sometimes, she likes to sit and observe the diverse populace of Lawrence. Sometimes, when exhaustion hits her, she sleeps in the comfy, burgundy leather recliner in her office. She even keeps cereal and packed lunches in her room for when she’s in a rush.

This level of relatability with a professor can be seldom found, and students enjoy it.

“Grant, for me at least, is that she is relatable and dependable. She is someone I always want to have contact with,” Blue said.