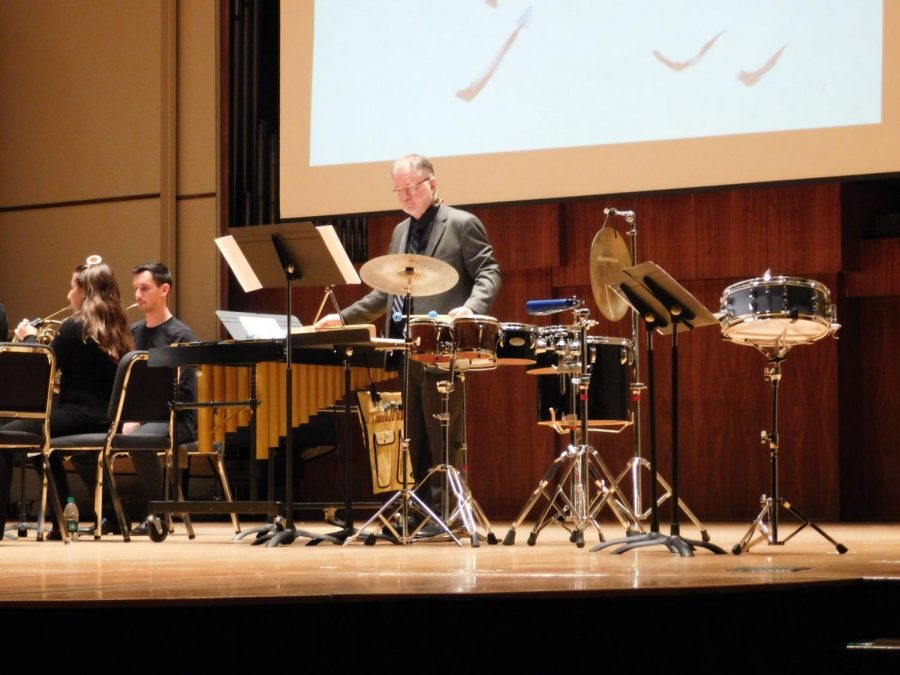 Music of Noah’s Ark: Professor Tom Morgan, director of percussion studies, performs his piece “Noah” with the Washburn Faculty Woodwind Quintet while flashing artwork by Rita Blitt on the projector. Morgan worked on this piece for many months.

Professor Tom Morgan, director of percussion studies, began his faculty percussion recital with a blend of marimba and vibraphone percussion at 7:30 p.m. Friday, Oct. 5 in the Rita Blitt Gallery at White Concert Hall.

The recital began outside of White Concert Hall in the newly installed gallery, which celebrates the legacy of award-winning artist Rita Blitt and the significance of the performing and visual arts coming together. Artist Rita Blitt attended Morgan’s recital.

Morgan began with a piece by Christopher Dane titled “Etude for a Quiet Hall” on the marimba. This piece had a mixture of quick and slow elements using a four-mallet technique. Following this piece he performed “Vienna” by David Friedman on the vibraphone and “Running with Scissors” by Gene Koshinsky on the marimba.

“My first piece, ‘Etude for a Quiet Hall,’ just seemed like the perfect piece to play in there because it’s so intimate,” Morgan said. “That was one thing I liked about playing in there, and having people up close.”

After performing in the Rita Blitt Gallery, Morgan moved outside to perform in the Rita Blitt Sculpture Garden. He used one of the sculptures as a means to make music. “Improvisation on ‘My Friend'” was composed by Morgan, himself. He told the audience to envision the sounds of the traffic as part of the piece as he performed.

According to the program for the concert, while Rita Blitt was working on the sculpture, “My Friend,” she envisioned this work as a sound sculpture playable by visitors. Morgan was excited to continue the tradition of playing music on the sculpture.

After performing in the Rita Blitt Sculpture Garden, the audience moved to White Concert Hall to finish the concert.

Morgan began by playing the snare drum. This was a composition of three solos in his book, “10 Sequential Rudimental Snare Drum Solos.” They represent the traditional style of snare drumming dating back centuries, with a modern twist. These pieces were “Shell Shocked,” “Power Surge” and “Termination Point.”

Following this he performed “For Big Sid,” which was a drumset improvisation composed by the jazz drummer Max Roach.

The final composition was “Noah,” which was written by Morgan. He had been working on this piece for several months.

This piece was an attempt to musically represent the biblical story of Noah’s Ark. Morgan collaborated with the Washburn Faculty Woodwind Quintet, as well as with Rita Blitt, who created a series of paintings to go with the music. The faculty members who performed with Morgan included Rebecca Meador on flute, Zak Pischnotte on clarinet, Dieter Koch on oboe, Nicole Duevall on horn and Austin Way on bassoon.

“Meeting Rita Blitt, talking to her and having her paint for it, it all kind of fell into place,” Morgan said. “The ‘Noah’ piece was special to me because I wrote it and it was a major effort to put it all together.

“I think this was really unique and it was a big collaboration with Rita Blitt,” McEathron said. “I think all of the pieces fit well in the gallery. It was really cool to see Rita Blitt here.”

McEathron said it was really neat to see the two mediums collide.

“I personally have never seen anything like this, like a painting artist and a musician artist collaborating on a piece like this.” Terbovich said. “I really liked the last piece [‘Noah’]. It was very visually interesting and it flowed so well with how he titled every movement.”