‘Castlevania’ Season 2 review: Gothic horror returns, and lives up to the hype 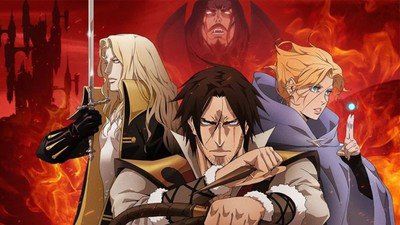 After decades of spotty video game adaptations, ‘Castlevania’ does its namesake justice.

The iconic gothic horror action game series’ television adaptation returns after seemingly ages, the first season released in the summer of 2017. The first season was a short affair, lasting only four episodes each just over 20 minutes. Ever since watching that in 2017, I had been hyped for a second  season ever since, an adaptation of ‘Castlevania III: Dracula’s Curse’. Season two continues on the story season one started, and focuses on the son of Dracula (Graham McTavish), Alucard/Adrian Tepes (voiced by James Callis), Sypha Belnades (Alejandra Reynoso), and Trevor Belmont (Richard Armitage).

‘Castlevania’ season two certainly does not disappoint. Vlad Dracula Tepes returns right off the bat as a likable antagonist whose motivations can be immediately understood. Hell bent on destroying humanity in the nation of Wallachia, with Alucard, Sypha, and Trevor (Alucard and Trevor being skilled warriors, and Sypha being a mage-type, or type of wizard). The cast expands significantly with season two as well, with a group of Dracula’s vampire and human underlings who inhabit the teleporting castle which Dracula also inhabits. Standouts for me being the two “forgemasters” working for Dracula, Hector and Isaac, portrayed by Theo James and Adetokumboh M’Cormack, who basically reanimate monsters and other corpses to fight under Dracula’s horde, Carmilla (Jaime Murray) a vampire lady that doesn’t necessarily like Dracula, and Godbrand (Peter Stormare) a viking vampire that is as fun as he sounds.

My only problem with the series is entirely subjective. At the start, I really was more invested in Dracula and the trio’s stories, but the series had a large focus on Hector, Isaac and Carmilla. Although I quickly warmed up to Hector and Isaac, I never found Carmilla to be a likable presence. All three of them throughout the series were given considerable screentime, and I was really surprised to be introduced to a couple of very interesting characters with compelling backstories to match.

Just like the games’ gameplay loop, there is plenty of action, all very well animated and energetic, mainly grotesque monsters being dispatched by the central trio in many violent ways.

What I like most about this series is how it takes the concept of the games’ story, and takes it in its own direction. ‘Castlevania’ is written by Warren Ellis, who wrote the comic series Transmetropolitan and Moon Knight, and he makes the story compelling right away.

Overall, ‘Castlevania’ has to be the best adaptation of a video game I have seen. I have sunk a significant amount of time into the games, and the series most definitely does the games justice, certainly for a gameplay rather than story-driven series. It has a cast of memorable characters that leave you wanting more in the end. I never thought I would live to see the day where an adaptation of a video game was good, but ‘Castlevania’  surpasses that “good” mark, and is one of Netflix’s best, and I am excited about a possible third season happening.