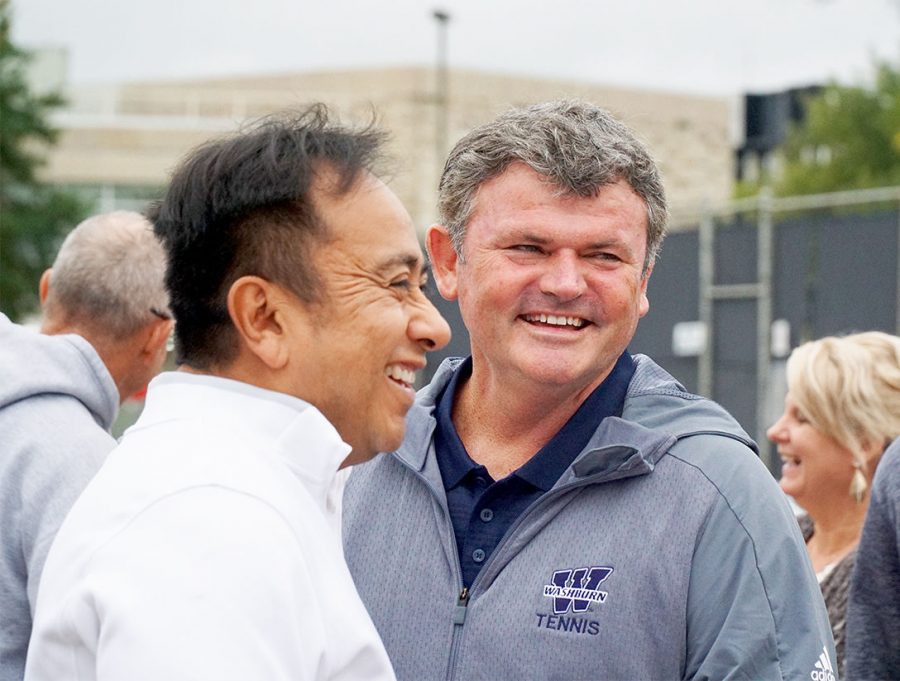 The tennis teams ended their fall season with a bang over homecoming weekend. The Ichabods dedicated their newly finished courts here on campus during an alumni event before facing off against the Kansas Wesleyan Coyotes at the Topeka Country Club on Friday, Oct. 12.

The tennis courts were re-surfaced and a scoreboard was constructed during the fall of 2017. On Friday, the updated facility was dedicated to alumni players, many of whom contributed donations that made the project possible.

“It was great that everybody came. We had a lot of alumni from all over the country, and even from outside the country, someone came from Australia,” Price said.

One of the most notable alumni guests was a former tennis player who won the conference tournament in 1936 and 1938. Those accomplishments have been displayed alongside other Washburn tennis records on the back of new scoreboard.

The opportunity to interact with Washburn tennis alumni proved to be a valuable experience for the teams.

“I hadn’t met those people before, so it was cool to see who played for Washburn in the past,” said sophomore Bradley Eidenmueller. “It was a fun event to get everyone together, have some food and hang out together.”

Following the dedication, the men’s team took on Kansas Wesleyan. Senior Alejandro Valarezo and junior Paul Haase were competing in the ITA National tournament on Friday, leaving the Ichabods short on players and forcing them to forfeit two matches to the Coyotes.

Junior Chase Brill and sophomore Marc Roura-Casi didn’t give their opponents a chance as they crushed the No. 1 doubles spot with a 6-0 match. Sophomores Raul-Alin Dicu and Bradley Eidenmueller dominated the No. 2 slot with a 6-1 match.

“Considering that we were missing our two best players, I think we did really well,” Eidemueller said. “There weren’t any super close matches, everyone was playing at a good level.”

The tennis teams have completed their fall season and will begin playing matches again in February. With Valarezo and Haase taking third place in the ITA National tournament, the Ichabods are looking forward to a solid spring season next year.

“I think we are positioned the best that we have been to win conference this year because of our depth,” Price said. “We are so good at one through six, and I think that’s one of the first times we can say that. We’re ready to take it all.”