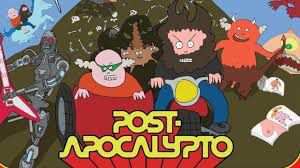 Throughout most of the Tenacious D album “Post Apocalypto,” I wondered about how and why it was created. I found myself having thoughts such as why am I listening to these songs, what is the meaning of them and I hope they don’t get stuck in my head. I usually listen to K-Pop and Latino music with the occasional hip hop song thrown in, so this album came as a shock to my music taste.

I have listened to Tenacious D before, and I have watched their videos. I enjoyed the rock concept when I was younger, but this time the concepts are radically different from those before. Before the videos and lyrics matched, yet the lyrics in “Post Apocalypto” seemed to be over the top. In one of the songs “Daddy Ding Dong,” the lyrics are composed of various curse words that don’t explain the song. I’m not a huge fan of excessive cursing in the music I listen to, so this was quite jarring and a little disappointing.

The emotions that are being shown in each of the songs seem to vastly differ rather than having a common theme. “Making Love” seems to be overtly sexual with re-population being the main point of it. The excessive sexual content is off-putting, and although the tempo and melody going on in the background is pleasant to hear, the lyrics themselves detract from what could otherwise be a great song. Whereas with “Robot,” the song starts out slow, but as it progresses from sad to a line about killing evil with references to the Nazis and KKK, then back to being depressing.

The next song was “Take Us Into Space,” which is a song about going into space to save the Earth. It then evolves into never coming home and experiencing space life. It is probably the strangest song on the album next to “Daddy Ding Dong” and “Hope.”

The weirdest song is “Hope.” It sounds like a great song that might seem to be inspiring and beautiful, but that is not how it plays out. Although it makes the effort to try to make it heartfelt by talking about a journey with hope, the song itself is so strange that it made me wonder what was going through the minds of Tenacious D. In the music video, there is a two headed dog reminiscent of Nickelodeon’s show CatDog. The lyrics say “hope is a doggy, a sweet doggy, standing next to a rose.” I’m honestly not sure what the point is because immediately after this part, it talks about a rose growing to survive a nuclear Holocaust. It flags the question of why they would include mentioning something that was a devastating part of our history”

I understand that Tenacious D are a sort of parody-style duo. However, the album is one that I did not enjoy at all. The content itself is not funny, and I did not like the mentioning of issues that plagued history. I used to relatively enjoy their music, knowing that it was only meant in good fun. Yet I wondered where one draws the line at being too much. I feel that Tenacious D crossed that line, and I don’t recommend this album for people to listen to because of these reasons. That said, if you enjoy this type of music, then perhaps you should listen to this album. If you find yourself as being an easily offended individual, I recommend staying far, far away from it.