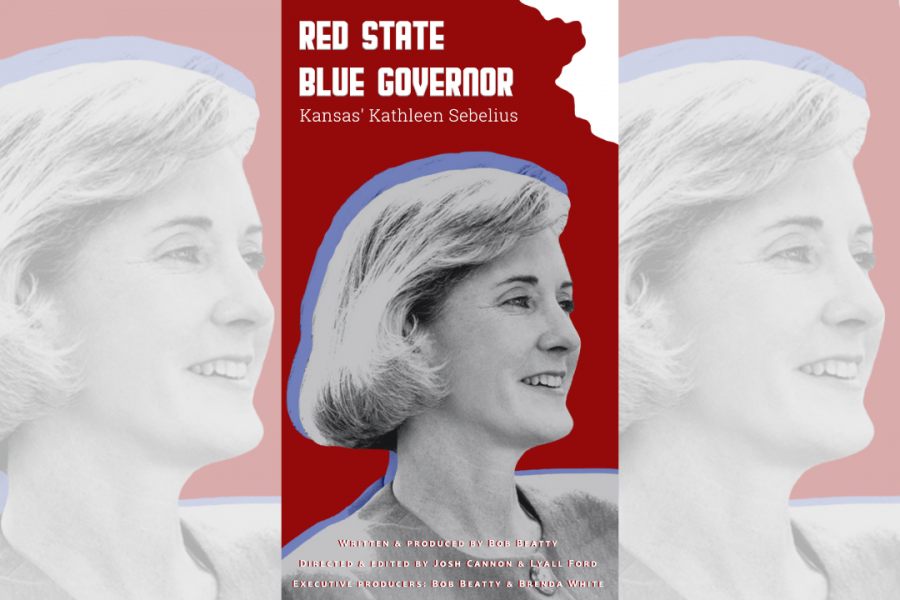 Some faculty and staff at Washburn University have produced a documentary about the life of former U.S. Secretary of Health, Kathleen Sebelius. The documentary is called “Red State/Blue Governor: Kansas’ Kathleen Sebelius”.
“Red State/Blue Governor” covers the life, career and work of Sebelius. It shows her time growing up in Ohio and moving to Kansas, and ends with her leaving the state to join Barack Obama’s cabinet, though the focus is mostly on her time spent in Kansas.
Much of Sebelius’s life was spent changing things for the better and making impacts by being the first Democrat elected as Insurance Commissioner, the Kansas governor and even the U.S. Secretary of Health and Human Services.
“We spent about six hours just interviewing her, so it was a great experience, just being able to go in-depth with someone who accomplished so much,” said Bob Beatty, professor and chair of the political science department at Washburn and the producer of the documentary.
Sebelius graduated in 1970 with a political science degree from Trinity Washington University before finally moving to Kansas in 1975. She was the first female Democrat to be elected Kansas Insurance Commissioner.
“We acquired some things from the White House and Congress,” said Lyall Ford, general of KTWU and co-editor of the documentary. “Sebelius also gave us access to all the political ads she used throughout her campaigns, both as insurance commissioner and her two campaigns for governor.”
She starred in several memorable TV appearances and ads during her campaigns, including ads calling out other insurance commissioners for taking money and even an ad where she spoke with Elmo about healthy eating.
“One of the things that I found interesting were the political ads, Sebelius had some really creative political ads,” said Ford. “She had an ad where she was driving a school bus about the educational program.”
Sebelius did many notable things in her time, from being the first female chair of the Democratic Governors Association, to being cited as most likely to become the first female U.S. Democratic President by the New York Times, to her nomination by Obama to join his cabinet.
“One of the challenges of this was trying to figure out how much content from each era of hers we could include,” said Josh Cannon, livestream production specialist and co-editor of the documentary. “We included stuff from the late 80s to the early 2010s, so we had to combine three decades of this woman’s career and make it fit.”
Despite being a Democratic candidate, Sebelius made good negotiations with most Republicans as well as Democrats. This included convincing legislature to increase school funding, being labeled one of the most popular governors in the country and even being reelected governor in the Republican state of Kansas in 2006.
“Right now, there’s a lot of polarization between the two parties,” said Beatty. “They don’t get along very well but if you watch this documentary, and you see Kathleen Sebelius, it shows that things don’t have to be so polarized.”
Red State/Blue Governor will be airing at 3:30 p.m. on Sept. 4 on KTWU.
Edited by: Alijah McCracken and Madison Dean