Sports Kickoff celebrates the beginning of the athletic calendar 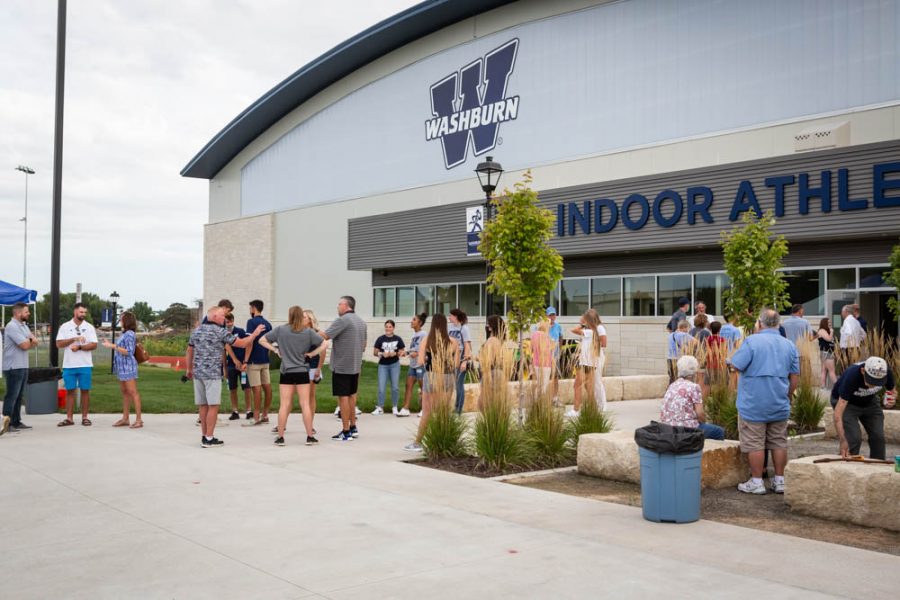 BBQ kickoff: On Aug. 29, Washburn hosted a sports kickoff inviting student-athletes and family members to come out and tour the new facility.

After the event was canceled last year due to COVID-19, Washburn Athletics held their annual kickoff barbeque event on Sunday, Aug. 29, to signify the beginning of the athletic calendar. The event was held from 4-6 p.m. in the Washburn Indoor Athletic Facility, which opened last year while athletics were shut down.

Student-athletes and coaches from every team were present and some conducted tours of the new facility to visitors, who were also provided food and drinks while attending. The kickoff was the first time the new facility was open to the public and family members of athletes took advantage of the opportunity.

“It’s really nice and I have just absolutely loved Washburn,” said Valerie Newfarmer, whose daughter Jaden, is a freshman on the women’s basketball team.

People who have worked in the facility were also excited to show off the new facility to the public for the first time.

“The pictures and videos are really good but they hardly do it justice when you get in here and see how big it is and the style of the field and the track,” said Track and Field Head Coach, Cameron Babb.

With COVID-19 ongoing, the attendance was smaller than in years past, but ultimately still a success in the eyes of the athletic department.

Matt Hutchinson, Associate Athletic Director and Director of Development at Washburn, explained that a typical kickoff event brings in around a thousand people over the course of the event. But even with that number being lower, the event was a success thanks to those that showed up, along with support from donors.

The kickoff marked the beginning of fall sports as many will begin their seasons starting today. Washburn’s athletic department looks to continue making the kickoff an annual occurrence after a year away.