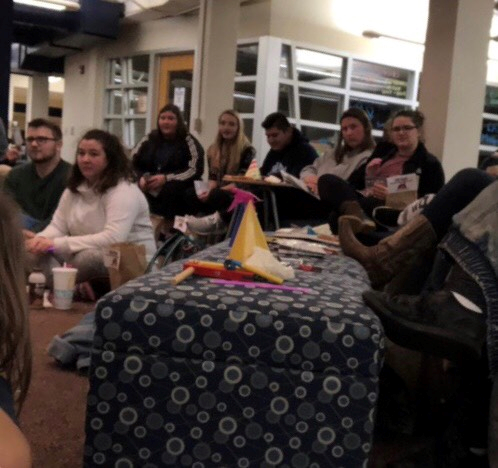 Rocky horror: The audience gathered around the screen in the union underground before the showing of the film. Some viewers already had their props ready to go.

Washburn University’s student organization Queers and Allies put on the first-ever screening of “Rocky Horror Picture Show.” The showing included some of the classic traditions alongside the movie.

The showing of the movie was at 7:30 p.m. Wednesday, Nov. 7 in the Union Underground. The film was projected on the stage and a group of about 50 people huddled around the screen, some with pillows and blankets, to watch the classic, “Rocky Horror Picture Show.”

Each viewer was provided with a prop bag that contained items that the audience could use for the traditions that go along with the film. Each bag contained a bag of rice, a glow stick, a piece of toast, a party hat and noisemaker, a newspaper, a latex glove and two playing cards. There were 10 bonus bags that also contained a spray bottle. The props were meant to be used during certain scenes to make the movie more interactive and there was an instruction sheet included in the bags for any Rocky Horror “virgins” to reference. Sammi Ford, a junior psychology major, was a first-time Rocky Horror viewer.

“The movie was really interesting, I’ve never seen anything quite like it,” Ford said. “Throwing the rice and yelling were the best parts for me, it was cool to see people get so into the experience.”

The information sheet also gave instructions on some verbal traditions that the crowd were supposed to do. Many of the verbal traditions were based on the characters and everytime a characters name comes up on the screen, the audience was expected to shout out the phrase. Audience members were also encouraged to sing and even dance along with the well-known musical numbers. The viewers did dance along to one of the most well-known songs from the film “The Time Warp.”

Amelia Anderton, vice-president of the hosting club Queers and Allies was very excited that the event went so well.

“This is something our club has wanted to do for a long time, and I’m excited that we could reach so many people outside of our small club and bring a little bit of queer culture to campus.” Anderton said.

Queers and Allies is an organization dedicated to being a safe space for all queer-identifying Washburn University students and any allies of the queer community. The club offers bi-weekly meetings, hangouts, and events such as the Rocky Horror screening.

In the future Queers and Allies are planning to work with the office of diversity and inclusion to put on Gaypril. This is a month of queer related events and speakers that will come to campus to bring awareness to queer issues.

If you have any questions pertaining to Queers and Allies or any future events that they are planning, feel free to contact the president Sarah Miller at [email protected] or come to the next general meeting which will be held on Dec. 5 at 6 p.m. in Mabee room 105.