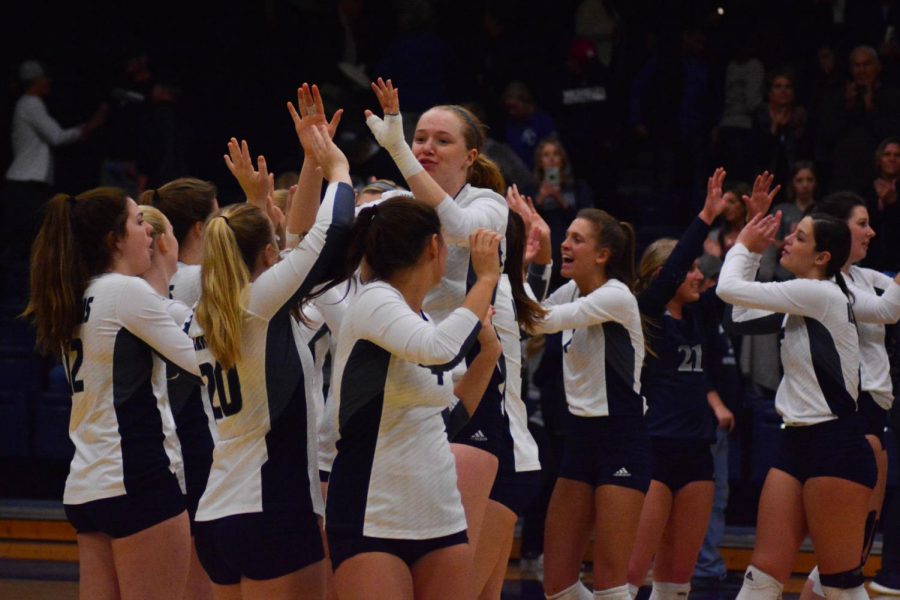 Saturday afternoon was senior day for Ichabod volleyball as they honored the careers of Shayla Conner, Olivia Powell and Makayla Maxwell prior to their matchup against Pittsburg State. Coming off a defeat Friday night, Washburn was looking to gain some momentum as they head toward the postseason.

Shayla Conner opened the match with an ace leading to an early 8-3 lead. The onslaught to begin the match subsequently forced Pittsburgh State into a timeout. Washburn maintained the five-point advantage as they continued to lead 14-9 midway through the opening set.

The Gorillas continued to fight as they drew to 15-12, but emphatic kills from Genna Berg and Kelsey Gordon along with a Gorilla attacking error put an end to the run to make the score 18-12.

Alternating points out of the timeout kept the advantage at six with a 21-15 lead. Three straight points for Washburn stretched the lead to 24-15 and set point. The Bods struggled to close the set as Pittsburg State scored 4 straight points before Erica Montgomery hit the ball off the block and out of bounds to win the set 25-19.

Pittsburg State started the second set quickly as they surged to a 3-1 lead before back to back points tied the set at three apiece. The two teams continued to alternate points as the set remained tied at seven all. Back to back kills by Kelsey Gordon finally gave the Bods some breathing room with an 11-9 advantage. After taking three of the next four points Washburn led 14-10 and Pitt State called timeout.

Washburn seized even more momentum out of the timeout as they hit a 6-1 run to stretch the lead to 19-11 sending the Gorillas into another timeout. Both teams alternated points after the timeout to make the score 22-13. Washburn played steady to finish out and win the second set 25-16.

Early hitting errors and a kill from Allison Maxwell gave Washburn the early third set lead at 5-2. Led by back to back aces from Katie Heeter the lead to ballooned to 9-3 and Pitt State used a timeout to regroup.

Pitt State continued to fight, but Washburn continued their steady play maintaining their six-point advantage at 13-7. A 7-2 run ensued and the lead was a sizeable 21-9.

Washburn very nearly held Pitt State to under ten in the set but ended the match and the set with a final score of 25-12.

Shayla Conner has been a leader for Ichabod volleyball all season long and is happy to see all the work translate to success.

“Pretty emotional”, said Conner of senior day, “I’ve been here for five years and I’m really proud of this season cause we’ve kind of come together and it seems like the five years has paid off.”

Between it being senior day as well as playing for a shot at the MIAA title, this game served as a confidence booster after back to back defeats.

“I think it was just a great win for our seniors and knowing that this was our last regular season game in Lee Arena and it meant a lot to them, so it was just a great time getting that win for them and I think we’re going to be ready for Tuesday night’s match,” said red shirt freshman Kelsey Gordon.

As the postseason looms, Conner and company couldn’t be any more excited.

“I’m so excited, we have a lot of talent, a lot of strong arms,” Conner said. “We’re strong in almost every facet of the game so it’s just if we decide to show up we can beat any team in the conference or country.”

Washburn began play in the MIAA tournament on Tuesday, but these results were not available at the Review’s press time.