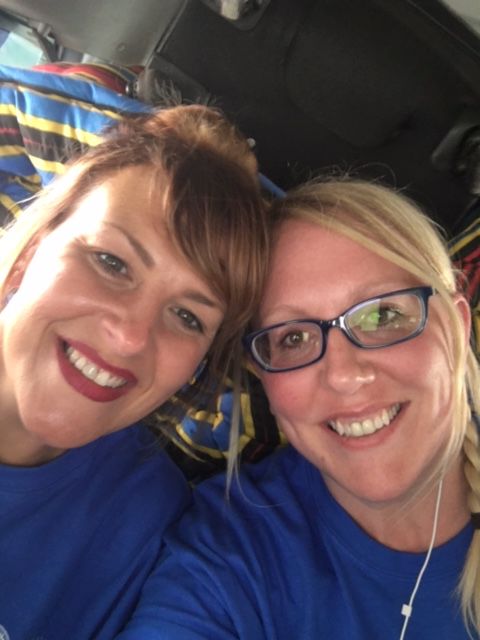 Nearly there: Kerri Moore, left, and Amy Hanlon, right, are defending their doctoral project on Friday, Nov. 16. They’re pictured here while working together as nurse practitioner students in Guatemala during the summer of 2017.

The Washburn University School of Nursing will have four candidates defend projects this week on their way to a Doctor of Nursing Practice degree.

The DNP program, which began in 2013 and has already seen 11 graduates, consists of classwork, clinical work and this final community-based project.

“Our students in their project defense are actually taking a community-based problem and finding an intervention to address that using evidence-based practices, trying to improve health outcomes for a specific population,” said Alizabeth Ballard, assistant director for Student Services in the School of Nursing.

The DNP program focuses on two different areas; psychiatric and mental health and primary care. The students will present a defense of a project based in one of these areas.

“During the defense, our students will take center stage and present on their research,” Ballard said. “They’ve been working on this project for three full semesters. They will present on the literature that…exists around the general issue.”

The students will present the steps taken with the specific population they worked with and the outcomes of this work.

“They’ll share about either the intervention [or] the type of assistance that was given to that population to address the problem,” Ballard said. “They’ll then present on their findings.”

After their presentation, the candidates will take questions from those in attendance, including faculty.

“Then the defense committee will proceed to close the meeting,” Ballard said. “[Next], the committee will talk about how the project went, what questions they might have [or] if anything needs to be improved. Then they’ll vote as a committee whether or not to confer their degree or if extra needs to be worked. Then everyone can come back in and we’ll celebrate because [they will all] be doctors.”

One of the projects being defended is a group effort. Even though work for their project began in fall of 2017, Amy Hanlon and Kerri Moore have had their minds on the project for quite a while.

“We were encouraged to think about… topics that appealed to us that we felt like… had a place and needed to be studied in nursing and in medical practice in general,” Moore said.

Hanlon and Moore’s project looked at the psychiatric side of the program.

“It is looking at the issues associated with boarding, which is length of stay greater than four hours for psychiatric patients in the emergency department,” Hanlon said.

Hanlon said that the project included a six-month analysis and a survey that was given to emergency department providers and nursing staff in that time period.

“The survey looked at their confidence and knowledge of mental health and treating mental health patients as well as barriers to learning and what topics they would like for training in the future,” Hanlon said.

The team of two looked at the analysis and survey and used the results to determine the next steps.

“[We] combined those to see where things could be helped, where the issues lie and what we could do for recommendation for further education,” Hanlon said.

Moore said that this research was done at two separate locations, Via Christi Hospital St. Joseph in Wichita and Holton Community Hospital, and combined those into one sample group. These two locations offered a diversity of settings.

“We worked with a large, urban, academic medical center and then we also worked with a small, rural critical access hospital as well,” Moore said.

This final defense is a culmination of the hard work that these candidates have been through for the past few years.

“It is a long and arduous process,” Hanlon said. “It literally takes over your life and you forget who you are by the end of it, but it is all worth it. We learn a lot of great things.”

In addition to being in the psychiatric and mental track, Hanlon and Moore are also a part of the fast track program.

“Anyone going into the [DNP] program, whether you’re in the psychiatric/mental health track or you’re in the family nurse practitioner track, we all start together,” Moore said. “After the first year, if you’re grades are good enough, you can choose to do either the fast track program or the traditional program.”

For Hanlon and Moore, and anyone else doing the psychiatric and mental health fast-track program, it takes three and a half years to complete.

Hanlon and Moore credit the faculty for their help in the entire process.

“The faculty for the program have been so helpful,” Hanlon said. “Very encouraging and supportive but they also push us really hard. That’s a necessary thing when you are moving through a terminal degree.”

Hanlon mentioned a few faculty members she was thankful for specifically.

“Dr. Delaine Smith and Dr. Tracy Davies, Dr. [Brenda] Patzel, she was there first but she’s retired now,” Hanlon said. “They’re all the psych/mental health faculty and they are just fantastic to work with.”

Hanlon also said that professor Shirley Dinkle, the head of the DNP program, has been helpful as well.

“She pushes us to keep moving forward when we don’t want to,” Hanlon said.

“All of the staff that teach at our level are doctoral prepared or in the process of receiving their own doctoral degree, whether that’s a PhD or a Doctorate of Nursing,” Moore said.

As Hanlon and Moore get ready for their defense this week, the two have a lot of work to do.

“We are finishing our manuscript, which is pretty much done,” Hanlon said. “We have a Powerpoint presentation we’re finishing up and then basically it will be a lot of run-throughs of our presentation.”

The manuscript they are finalizing will not just be presented to Washburn, it is also destined to be reviewed by outside groups as well.

“The manuscript that we prepare is actually supposed to be something that we can submit to a professional journal,” Moore said. “On top of that, we are also required to submit to each of the host facilities, each of those hospitals, an executive summary of the results that we found.”

Moore said that that summary will help the hospitals understand how the research relates to them and the recommendations that Hanlon and Moore would give to them, including information such as financial implications.

Hanlon said that those who are considering going into the DNP program need to understand the commitment it takes.

“[Commitment] not just for yourself, but being able to work is difficult, especially at this last part of the program because there are so many clinical hours,” Hanlon said. “The project process in and of itself is just very time-consuming.”

The two also said that it might be helpful for nursing students to get into a job before considering going into a program like this.

“The more experience you can come with to a program like this, not coming directly out of your undergrad and going straight to it,” Hanlon said. “I think if you can have some of that experience as a nurse first before you head into something, I think that is beneficial.”

Moore said that those looking at getting into the program or those who are in the first year or so of the program might consider coming to one of these defense presentations. She said that when students first start looking at the project, it can be a surreal and somewhat daunting thing.

“I feel like being present for these defense presentations, and actually getting to see the way they’re structured, the amount of time, energy [and] analysis that goes into each one of them, it takes it out of abstract thought and makes it concrete to what’s expected of [the students],” Moore said.

If you are interested in attending Hanlon and Moore’s defense, it will take place at 10 a.m. Friday, Nov. 16 in Petro Room 204. Two additional defenses, by candidates Crystal Stevens and Rachel Hill will be given at 10:30 a.m. and 4 p.m. respectively in the same room.