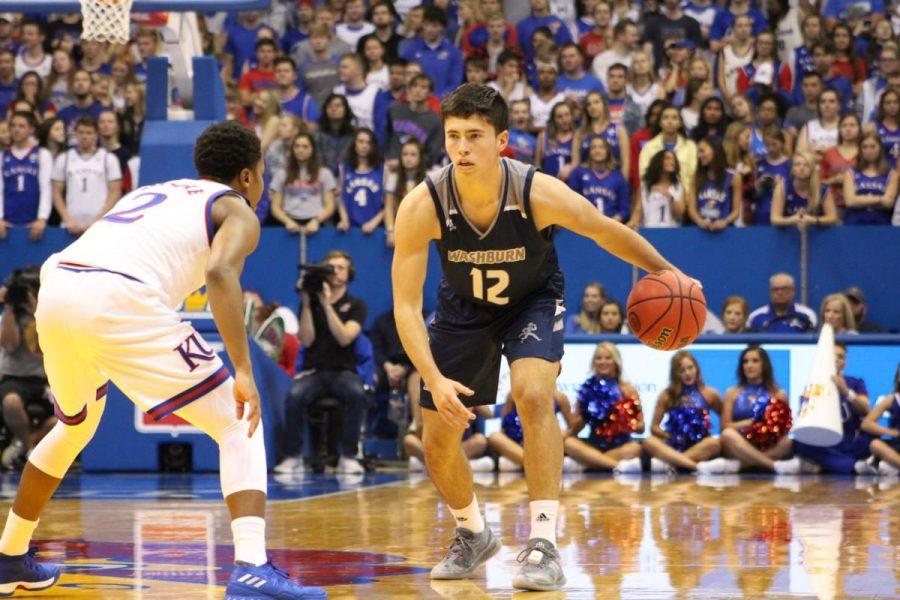 CROSSOVER: Sophomore Tyler Geiman looks to cross up the KU defender in the exhibition game at Allen Fieldhouse earlier this year. Geiman broke the Blue Valley High School assist record during his time in high school.

Basketball season is heating up as we head towards winter break. The Ichabods have come out of the gate strong with a 4-1 start to the year. One of the contributing factors to the strong start has been the play of sophomore guard Tyler Geiman.

Geiman is from Stilwell, KS and attended Blue Valley High School graduating in 2017. In his freshman season at Washburn he appeared in 27 games and averaged 4.5 PPG. He had his biggest scoring game against No. 1 ranked Northwest Missouri when he achieved his season high with 15 points. Geiman was also selected to the MIAA Academic Honor Roll.

Geiman is the son of Todd and Cindy Geiman. His father works in the online banking and mortgage business and his mother is a part time accountant. Geiman is the youngest of three children as he has two older sisters, Shelby and Bailey.

Geiman had an inside track in his path to playing Washburn basketball. His father was an assistant coach while attending graduate school in Washburn, so he had connections with the staff and has always been familiar with the program.

“Coach Hundley always was recruiting me through high school and then when [Brett] Ballard came to Washburn I just knew it was the right fit,” Geiman said.

After a strong year last year in Ballard’s first season as Washburn head coach, Geiman and his teammates have lofty goals of winning the MIAA championship and making their way towards an NCAA championship.

“I think the season is going to be very successful we have a lot of momentum from last year’s success that we can use to make sure this year goes even better,” said freshman guard Jalen Lewis, Geiman’s teammate.

Academically, Geiman has followed the same sort of career path that his parents did. He is majoring in finance and economics and looking to gain his master’s degree while at Washburn.

As of now, he is unsure what specific job he is looking for, but he will certainly have some knowledge and advice from his parents if he pursues the financial field.

Playing college basketball can sometimes feel like a job so there isn’t always time for extra hobbies and interests after your basketball responsibilities as well as school. For that reason, Geiman enjoys just hanging out when he is free.

“I would say hanging out with friends and family is one of my biggest things, just being around the guys because that’s one of the most fun parts about being here,” Geiman said.

When you aren’t hanging out with your friends and family there is common thing that can keep high school and college-aged kids entertained for hours, such as video games.

“I certainly play my good amount of video games. If I had to choose my favorite game right now would be ‘Fortnite’,” Geiman said.

One advantage that sports can give you is the opportunity to travel and make life long memories doing so. Geiman said some of the coolest things he has ever done in his life came from traveling around the U.S. when he was on the AAU basketball circuit during the summers while in high school. He has been to both coasts to play in New York and LA as well as a trip to Atlanta.

When asking people what is on their bucket list, many aspire to travel to different places around the world and see iconic attractions. Geiman’s number one item can be done right on campus in Lee Arena if he so chooses.

“Dunk in game, for sure,” Geiman said.

Get out to Lee Arena and cheer him on because everyone knows that bigger crowds get the adrenaline pumping more and everybody can jump higher when the adrenaline is racing through your body.

Geiman had an incredibly successful career at Blue Valley High School scoring more than 1,000 career points, being named a two-time EKL Player of the Year and being first team 6A All-Stater his senior year. He, however, believes his biggest accomplishment was breaking the school’s all-time assist record.

Washburn has been an excellent fit for Geiman and he likes not being at bigger school such as K-State or KU.

“I love it here,” Geiman said. “I actually really like the smaller school vibes because everyone kind of knows everyone and everyone’s closer, so I like that.”

Keep an eye out for Geiman and the Ichabods as they are back in action against University of Saint Mary Nov. 29 in Lee Arena.