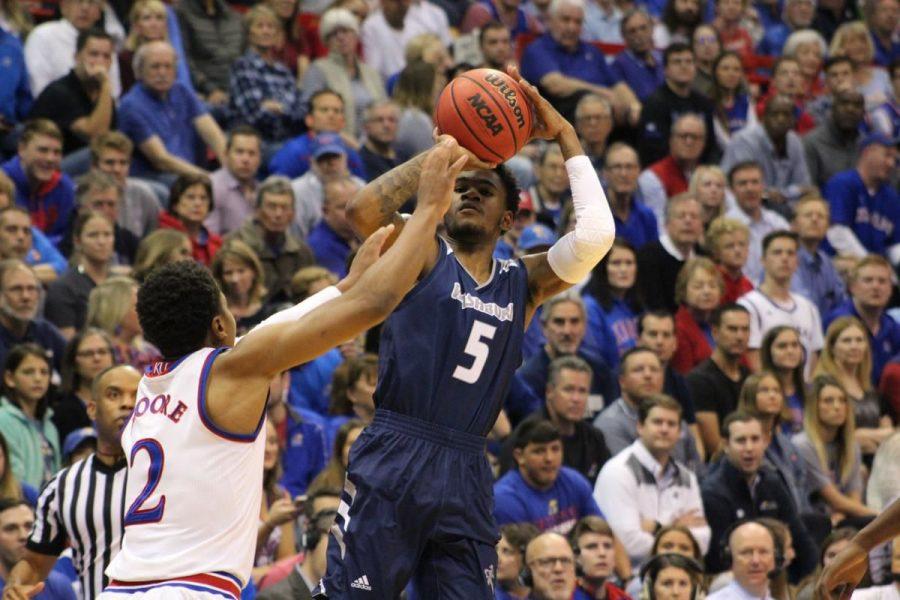 Splash: Javion Blake attempts a three-point shot in Washburn's exhibition game against the University of Kansas. Blake is one of nine players in Washburn history to score 1,000 career points.

As basketball season gets underway the Washburn Ichabods seem poised for a strong year and look to get back to the top of MIAA. One man who will look to lead that charge for the Bods will be senior guard Javion Blake. Blake recently went over the 1,200-point mark in his career during the first game of the season.

Blake is from Olathe, Kansas, where he was raised by his parents Monzell and Dionne Blake. His mother works closely with high school students, helping them to find a career that will fit them and get them headed in the right direction as they go through high school and beyond. His father is a barber in Olathe. Javion said he enjoys always having his haircut by his father.

On top of the support Blake receives from his parents, he is also appreciative of the supporting cast that he has around him from his grandparents both on his mother and father’s families.

“They are big supporters of what I do as far as school and basketball, and they make sure I have everything I need on and off the court.” Blake said. “I have a really big support system as far as family goes.”

Blake’s support system reaches even further as he receives support from his six siblings which include an older brother and older sister as well as two younger brothers and two younger sisters.

The story of how Blake made his way to Washburn is one that he described as some people having a conversation and it just so happened they were talking about him. Blake was at an unsigned basketball camp his senior year when one of the Washburn coaches had a conversation with his parents and expressed to them that he liked Javion’s game, so they set up a visit and he has enjoyed it ever since.

When thinking about future goals Blake has his sights set on chasing his childhood dream of becoming a professional basketball player but remembering his parents’ wisdom of gaining his college degree so that there will always be a plan B.

Plan B for Blake would most likely spin off his mass media degree that he will obtain upon graduation. He hasn’t completely decided which direction he would go but he said that it would be cool to be a sports reporter or an analyst for a TV network.

“I kind of have some ambition to be a journalist or an interviewer like someone on SportsCenter because it’s easy for me to talk about sports, as far as what’s going on, because sports [is] all I’ve known since I was a little kid,” Blake said. “I think it’s cool how people conduct interviews and what it’s like to get both sides of [an] athlete, both on and off the court.”

One of Blake’s favorite hobbies is the shoe collection that has been passed down in his family from his grandparents on his father’s side down to him. He describes it as having a pretty decent shoe collection.

Blake’s bucket list could very well be a bottomless bucket if he so chooses because the big item on his bucket list is to travel the world and see everything there is to see in this world.

Overall, Blake has really enjoyed his four years at Washburn, speaking highly of the faculty about how kind and caring they have been in working with him one-on-one to help develop his plan B so that he will always have something to fall back on after basketball.

Blake’s teammate, freshman forward Sevon Witt, is excited for the upcoming season and the leadership from the upperclassmen like Blake.

“I think the season will go really well for us. The team has been putting in a lot of hard work and we compete every single day,” Witt said. “We have a bunch of veterans and some newcomers, but we are all starting to fit in and mold into one.”

Blake and his teammates are set to open their home schedule against Rockhurst Wednesday, Nov. 14.