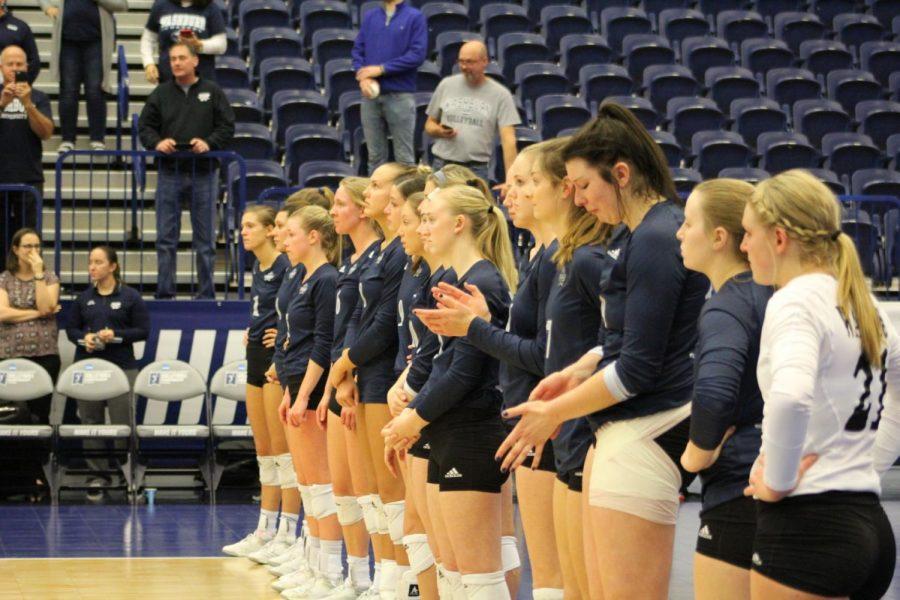 Postgame: The Washburn volleyball team stands at the end line preparing to receive their Final Four trophy's. Washburn finished the season 33-5, its best record since 2007.

After defeating Wingate on November 29, the Ichabod volleyball team advanced to the semifinal round of the NCAA Division II National Championships where they took on the No. 1 seed, Tampa. The Ichabods fell to the Spartans in 3 sets with scores of 25-23, 25-19 and 25-15.

Unlike last night’s performance, the Ichabods came out in the first set amped up. The whole set was tight with both teams changing leads often. Freshman, Kelsey Gordon led the Ichabods with 6 kills in the set. However, Tampa jumped to a 21-20 lead after a couple errors by the Ichabods. Those errors would come back to haunt the Ichabods as the Spartans would win the set 25-23.

The second set did not start as well for the Ichabods. The Spartans shot out to a 2-0. The Ichabods worked themselves back to a 5-5 tie. Tampa then went on a 9-2 run to take a 14-7 lead. Behind sophomore Allison Maxwell, the Ichabods went on a 4-1 run that led to a Spartan timeout. Coming out of the timeout, the Spartans retook the momentum and never looked back winning 25-19.

In the third set, the Ichabods got off to another slow start. The Spartans jumped out to a 3-1 lead before the Ichabods tied the game at 3 following an attack error by the Spartans. The Ichabods battled back to get to a 10-10 tie. After that, however, it was all Tampa. The Spartans seemed unstoppable as they finished off the set on a 15-5 run. The Spartans advance to take on Western Washington in the Championship match.

After one of the greatest seasons in Washburn history, Head Coach Chris Herron will miss this year’s senior class, primarily, setter, Shayla Conner.

“This year has been great,” Herron said. “The senior leadership has been great. The bulk of that has been on [Conner]. She has been an amazing leader, she has been our captain. Like I said yesterday, she has been here for a long time. I lean on her for a lot. We talk about the team a lot, she gives me a great perspective of what I should be seeing. I have the utmost respect for Shayla.”

For Conner, this season was more about the sport of volleyball, it was about the team.

“My team is what I will remember most,” Conner said. “I mean in general.  I have never been a part of a team that has this much chemistry or has had this much fun. I am definitely going to take away all of the friendships that I have made, and all of the memories that I have made. I will hold on to all of them forever.”

The Ichabods finish the season with a record of 33-15. This is tied the farthest any Washburn volleyball team has made it in the NCAA Division II National Championship. In 2007, the volleyball made it to the semifinal round as well.