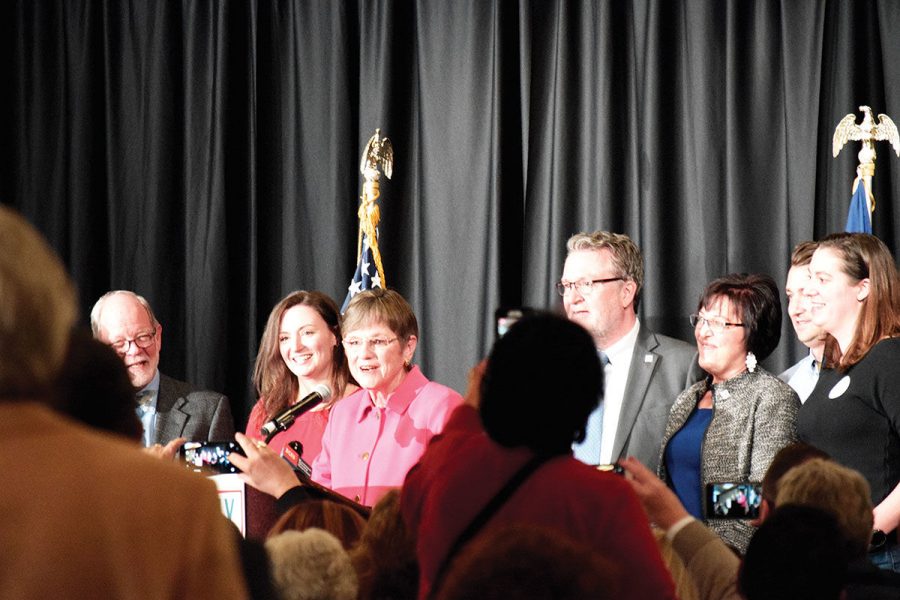 After months of campaigning, the 2018 midterm election is over. After very close polling throughout both races, Laura Kelly has been elected governor of Kansas and Steve Watkins will be the next member of United States Congress representing the 2nd District of Kansas.

Kansas reflects much of the environment of the nation. According to Bob Beatty, chair of the political science department at Washburn, this election, in many instances is about Donald Trump. Exit polling by CNN shows that two-thirds of those voting in a congressional race in the United States are using their vote to say something about the president.

“Trump is essentially on the ballot, but not everywhere,” Beatty said. “Kansas has become the epicenter of that battle, for two reasons. One is there are two districts here that [are] in play for the House. And then Kobach, who’s running for governor, is one of the closest Trump allies in the nation who’s not actually in the White House.”

Beatty said that this Trump-centered election is especially evident in Topeka. Since the president visited the capital city to campaign for Watkins and Kobach. There are many TV ads focusing on the alignment, including a Kobach ad that shows the president endorsing the candidate at the Expocentre.

Beatty said that another indicator of this is Kansas’ 3rd District, where early indicators show will elect a Democrat, Sharice Davis.

“Even though it’s a Republican district, they’re moderate Republicans,” Beatty said. “It’s looking like they don’t like Trump.”

Beatty said that it is looking like a new geographic split is happening in Kansas.

“The west is going to go Republican,” Beatty said. “[The] Kansas City area, [it] looks like, if things go the way the polls show, they are going to take a stance against Trump and the 2nd’s a battleground.”

Beatty said that the divide this time around in Kansas means that the election needs to be looked at on two levels.

“There’s Trump writ-large, and there’s Kansas,” Beatty said. “And it is even possible anymore to characterize the entire state. What we may see on election night is Shawnee County, Johnson County [and] Douglas County taking a stance, saying no to Trump and the rest of state; all of western Kansas, Wichita saying [yes].”

Beatty said that this split almost mirrors the rest of the nation.

“The divide of the nation is playing out here, possibly,” Beatty said.

Much of this division has changed now that Kelly has won.

“On the other hand if Laura Kelly wins the governorship, that [divide] played out, but in order for her to win, a fair number of Republicans are going have to say no,” Beatty said. “Whatever happens, that could be the really interesting thing.”

Washburn students were in full support of the candidates during this election cycle, some going so far as attending watch parties with the candidates as results came in. Two such students were mass media juniors Erasmo Nunez and Bayley Baker, who were in attendance at the Laura Kelly watch party at the Downtown Ramada in Topeka.

“I am in to see how this whole process works and what the overall message will be if she wins or even if she loses,” Nunez said.

Nunez, who voted for Kelly, said that his vote was for a change in Kansas.

“I voted for her because I think there needs to be change from the top down,” Nunez said. “I feel like she is the right person to do that, especially being able to reach across the aisle.”

Nunez also said that Kelly’s more moderate political leanings pushed him to vote for her, as he understands that not everyone agrees with each other on every topic.

“I think that is very attractive to individuals who see how the political process works but also to those individuals who [historically] voted Republican,” Nunez said. “I feel that there’s a lot of common ground between me and people who I haven’t always been able to agree with.”

For Baker, it wasn’t a question who she was going to be voting for.

“I voted for Laura Kelly because I’m a Democrat and I am avidly against Kris Kobach,” Baker said. “I stand by Laura Kelly as a Democratic woman and I believe it is time to have a Democratic governor in the state of Kansas following the disastrous governorship of Sam Brownback.”

While she was hopeful for the outcome to go Kelly’s way, Baker said that she was nervous about the outcome.

“I have faith that she will win and that the people of Kansas will understand that Kris Kobach is not the right choice for our state,” Baker said. “Regardless of Democrat or Republican party affiliation, I think just on a human level a lot of people realize that he’s not the best choice for our state so I hope to see her win tonight.”

On a national landscape, control of both houses of U.S. Congress is up for grabs, with the real battle being a fierce one that went down to the wire in the House of Representatives. Democrats will take control of the House for the first time since 2010, which means they will be able to decide who becomes the next speaker. Most assume that Nancy Pelosi, who held the position from 2007-2011, will hold the gavel once again. The Senate on the other hand will remain in the control of the Republicans, who have held power in that chamber since the 2014 midterm elections.