Spirit of Kansas Revives the Blues 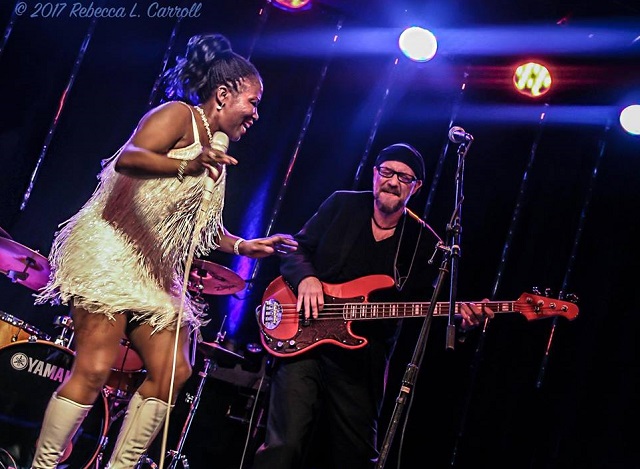 Robbin Kapsalis and Bill Holter of Vintage #18 performing at a gig in 2017.

Even in our current world, Blues is still a very enjoyable genre of music with countless listeners. The massive turnout at the Spirit of Kansas Blues Festival is evidence of that, with hundreds of people of different ages and cultures arriving to listen to over 12 hours of Blues music.
In addition to the music, vendors sold food, drinks, simple knick-knacks, toys, clothing and even some plants.
A Car Show also took place in another part of Lake Shawnee, with a firework show capping off the whole event at 10 p.m.
“The only event I really pay attention to is the Car Show, they have a nice Car Show this year,” said Nancy Crawford, a vendor at the festival who sold various sunhats. “It’s a fine event, it’s outside and it’s a beautiful day.”
Even with the temperature being as high as it was that day, the surplus of shady trees, tents and even a ‘mister’ to spray cool water on people, kept things from getting too grueling to sit through. Also aiding in keeping people cool were the vendors selling shaved ice and flavored lemonade, the latter of which was freshly squeezed and made on the spot.
“We come out here every year, usually under this tree,” said Barb, a long-time listener, who was joined by her husband, Bill, and their dog, coincidentally named Blue. “Keep it [The Festival] like it is, it’s really good. Lots of good music, relaxing for everyone.”
Some of the performers included Jeremiah Johnson and Robbin Kapsalis & Vintage #18, among others, who gave the festival a diverse set of sounds, ensuring all groups of people could find something to enjoy. Robbin & Vintage #18 were selling CDs of their performance, even writing autographs in the cases if asked, as they likely wouldn’t be back in Kansas for a long time.
“This is our first time at the Blues Festival; It’s our first time playing in Kansas as a matter of fact,” said Robbin Kapsalis as she signed autographs alongside Bill Holter, the guitar player of Vintage #18. “My only experience with the Blues Society was meeting the promoter, Suki Blakely. She saw us performing and asked us to be a part of this.”
The event was a huge success this year and another Spirit of Kansas Blues Festival will take place on July 4 next year, once more at Reynolds Lodge at Lake Shawnee.