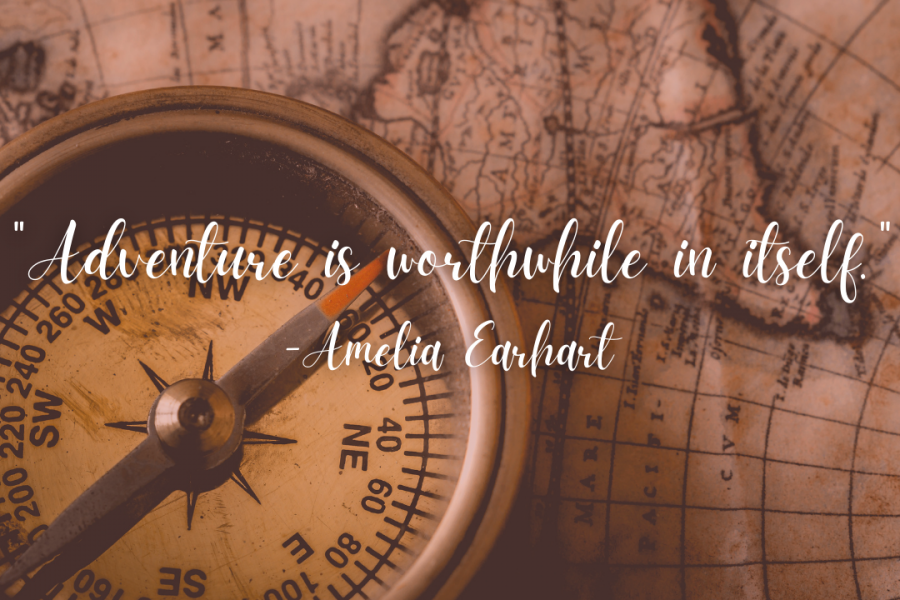 Adventure is out there: Amelia Earhart was beloved by all and her words still resonate to this day.

Today in history:
On July 2, 1937, Amelia Earhart’s plane disappeared and she and her navigator, Fred Noonan, were never heard from or seen again.
The pair were in the process of making an around-the-world trip and had just left Miami the day prior. 22,0000 miles of the 29,0000-mile trip had been completed. Earhart and Noonan were set to land on a small U.S.-owned island called Howland Island to refuel and stock up on supplies.
On that tragic day in July, Earhart radioed one of the ships aiding the two during their trip. The “Itasca” received a transmission from the plane. Earhart warned the ship that they were low on fuel but nobody could locate the plane after several attempts and all communication was lost.
Nobody is certain what followed but it is thought that Earhart attempted to make a smooth landing in the ocean. Earhart and Noonan, along with the plane, were never located and no evidence has ever been found in regards to their whereabouts. They were declared lost at sea on July 18, 1937.

To this day, scientists are still trying to locate any debris from the plane in hopes of one day being able to solve the mystery of the disappearance of Amelia Earhart.
Many theories look to solve the mystery of that fateful night of July 2, 1937, but nobody may ever know what truly occurred that day.
One thing is for certain, Amelia Earhart will forever be missed and her legacy will live on to inspire those that learn of her story.
For a more in-depth background of her disappearance, click here.

The life of Amelia Earhart:
Earhart was a popular aviatrix who broke the glass ceiling in the male-dominant field of aviation. She is best known for being the first woman to fly solo across the Atlantic Ocean in 1932.
Earhart was born on July 24, 1897, in Atchison, Kansas.
According to the Kansas Historical Society, she attended a private school in Kansas until her family moved while her father looked for work in Iowa, Minnesota and Illinois in 1908. Her time in Kansas was limited but her memory lives on in the state as she is celebrated each year at Atchison’s annual Amelia Earhart Festival.
Following her time as a nurse’s aide for the Red Cross during WWI, she started her journey with the aviation industry at the age of 24 and soon sprouted into one of the most loved celebrities of her time.
Earhart was a well-known feminist who encouraged women to pursue their dreams. She advocated for women’s rights, including the right to have access to a good education and career.
She was also a published author of her three books: “20 hours and 40 Minutes”, “The Fun of It”, and “Last Flight”. The aviatrix wrote of her many flights and adventures, making sure to document all that she deemed important.
Earhart received a plethora of awards and was recognized for her impressive work often. For the full list of her achievements, click here.
In February of 1931, Earhart finally married George P. Putnam after his many attempts to marry her previously. Letters written by Earhart to her future husband showcase her hesitation to be married at all. Earhart was a free soul who put her work first, so she wrote Putnam to state her hesitations and ask that they not be tied down in a traditional marriage that was usual of the time period. That letter can be found here. The two stayed married until the day of her disappearance.
Though she took part in many impressive flights, her final adventure would be her flight around the world that she took with Noonan. Although it had been done before, they had a goal of flying the most miles ever, 29,000 miles. Their adventure was sadly cut short due to their disappearance.
Her final words spoken during her last known transmission with the “Itasca” were, “We must be on you, but cannot see you — but gas is running low. Have been unable to reach you by radio. We are flying at 1,000 feet.”