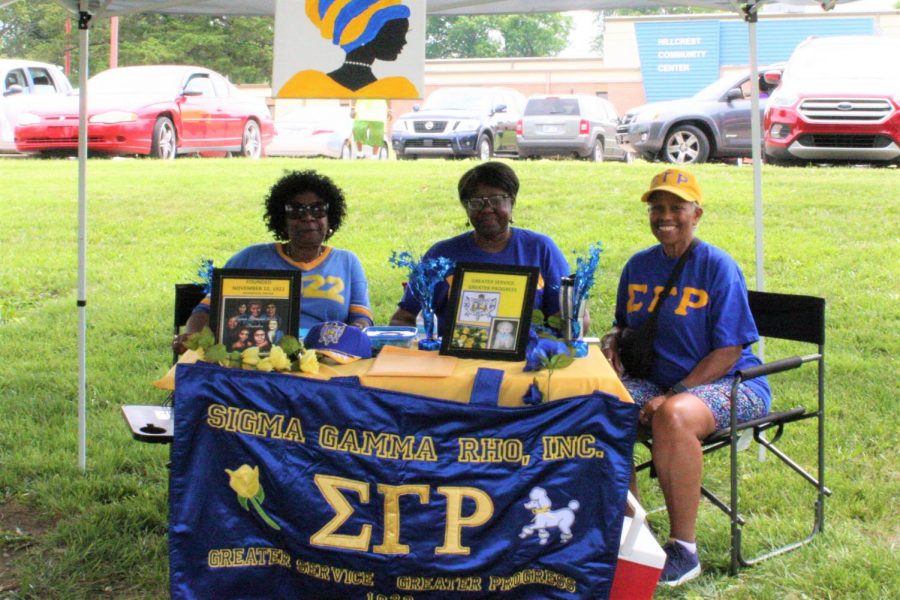 Need a drink?: (From left to right) Darlene Palmer, Marie Carter and Rosalyn Carr showed up for Juneteenth representing Sigma Gamma Rho. They brought plenty of cold water for anyone who needed a drink.

The summer heat this past Saturday didn’t stop local Topeka residents from turning out in large numbers for the annual Juneteenth celebration at Hillcrest Community Center which lasted from noon to 10 p.m.

Juneteenth is not a new holiday; it has been celebrated since the 1860s under various names such as Jubilee or Freedom Day. But this year’s celebration was historic as Juneteenth became a national holiday after being signed into law on June 17 by President Joe Biden.

Tents and food trucks were set up all over the park, lining the roadways that led throughout Hillcrest, while a large stage served as the perfect spot for people to give speeches from or perform on. It is here that city councilman and Deputy Mayor, Mike Padilla, gave a short speech about the holiday.

“The entire country needs to acknowledge the importance of this day, Juneteenth, because there are so many things that still have to be accomplished,” said Padilla. “With freedom comes a responsibility to be active in your community, to speak out on your behalf and on behalf of others. So use the freedom, become part of the freedom. Don’t sit back and let others fight the fight.”

Padilla went on to say, on behalf of Mayor Michelle De La Isla, that June 19 would be recognized as Juneteenth, National Freedom Day. This coincides with a proclamation from Governor Laura Kelly declaring June 19 as Juneteenth Day.

Padilla was just one of many different speakers present at Hillcrest over the weekend. His thoughts were echoed by many of the others who braved the heat to celebrate Juneteenth.

For Melissa Watson, a local business owner present at the event, celebrating Juneteenth was a “surreal” experience.

“If you think about people way back, they probably never even thought that this would be possible,” said Watson. “Celebrating, let alone getting out of slavery, but being able to celebrate it and celebrate it on such a wide spectrum all across the world, all across the United States anyways, as a national holiday it’s just unheard of. So, it’s awesome.”

Juneteenth goes all the way back to the Emancipation Proclamation that was signed by President Abraham Lincoln on January 1, 1863. However, the proclamation wasn’t fully enforced until a Union general by the name of Gordon Granger arrived in Galveston, Texas on June 19, 1865.

This is the history and the heritage that was being celebrated on June 19; a date to look back on as the day in which all people were seen as being free in the United States.

Many local musicians turned out to help celebrate Juneteenth, including J.Maurice, a hip-hop and r&b singer, who performed later in the day on stage.

“I really think that it was a good decision…for the Black communities especially,” said J.Maurice. “This is our day and I’m not trying to sound racist or biased but that’s something we’ve been fighting for for years, to be recognized.”

While for many people Juneteenth is still a relatively unknown event, for others within the Black community it is something that has been celebrated for years and has only recently gained the attention of the rest of the world.

“What I love more about today is that it’s not something that just happened today,” said Celisa Haggerty. “Since I was a child, every Father’s Day we would know we were going to Sunday service related to Juneteenth. So this isn’t new to us. Just that it’s national news. But it’s something that other people have been doing for a while.”

However, some of those who attended the Juneteenth celebration at Hillcrest saw the recent recognition of the holiday by President Biden as only another part of a long journey to achieve equality.

“We’re happy it is a nationally recognized holiday but it’s not a true victory because it’s not getting any of the police reform we’re asking for,” said Alona Harrison, a Washburn student pursuing her MBA and former President of the Black Student Union. “The fact that they’re fighting to not teach Juneteenth in school right now is ridiculous. When you’re making it a holiday that makes absolutely no sense. It’s a false victory. It’s like they’re giving us complacency, but they’re not really giving us the progress that we’re hoping for.”

Harrison went on to say she was afraid that now that Juneteenth is a nationally recognized holiday that it would become mainstream and lose its importance. She emphasized that more should be done to teach students in the classroom about Juneteenth and the larger history surrounding it.

To learn more about Juneteenth and its long history in the U.S., check out the website of the National Museum of African-American History & Culture which is located in Washington, D.C.

“When we celebrate our freedom in Christ and share his sacrifice for our freedom, we can all be free,” said Celisa Haggerty.