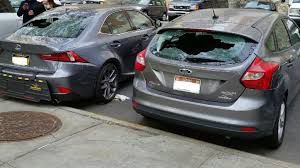 In early December, the Topeka Police released a statement on their Facebook page alerting the Topeka citizens of a large spike in reports of vandalized cars in several different neighborhoods.

Over the course of three days, the Topeka Police received over 30 reports of vandalized cars. It seemed as though whoever was committing these crimes was following a pretty steady pattern. They were breaking the back windshields of cars parked on the streets.

There are a handful of neighborhoods that are specifically being targeted, such as Kenwood, Potwin, College Hill, Randolph and Westboro.

Granted, the vandalism has declined in numbers, but it’s important to note that they were happening close to Washburn’s campus.

Topeka Police advised parking in garages or driveways to hopefully deter you from being a target.

While it seems as though it is mostly vandalism and little theft, Luis Guerrero, patrol ffficer for Prairie Village Police Department, suggests a handful of things to help prevent you from becoming a victim of both vandalism and theft.

“Lock your car door, don’t leave any valuables or money in plain sight and don’t leave the garage opener on the visor of your car,” Guerrero said.

“Burglarizing cars is just a form of opportunity crime. If your car is unlocked, they are going to go through it. Most criminals are lazy and they are just trying to find something quick,” Guerrero said.

If you find yourself in a position where you are the victim of vandalism or theft, Guerrero provided the steps to take.

“Do not touch anything or move anything around, immediately call the police department and have a general idea of what may be missing so you can report that to the police,” he said.

Guerrero said it’s extremely important to not move things around because when the police arrive to make a report, one of the first things they do is a DNA swab. It’s important to give the police information on who has access to your vehicle so they can narrow the search.

Immediately reporting the crime is essential as your car has essentially become a crime scene and it is important not to mess with it. Guerrero also said that it can be very helpful to have security cameras outside of your house or to know if your neighbors do because that may also be able to help the process.