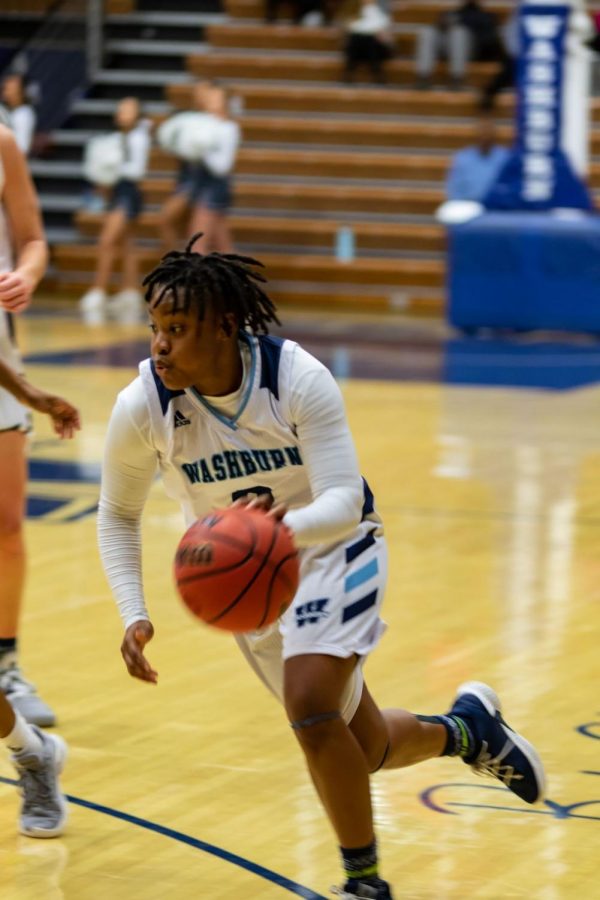 Ball out: Shelbe Piggie makes her way up the court. Washburn Women's Basketball won their game Saturday, Dec. 8, against the Mules.

The Ichabods have managed to get the brand new season underway with a series of wins. After an 85-53 win against University of Saint Mary here at Lee Arena last Thursday, the Bods returned to their home court last night, Dec. 6, and were able to keep their season momentum going with a 97-72 win against Southwest Baptist Church. The Bods played Saturday, Dec. 8 against University of Central Missouri. A hard fought battle earned Washburn a 70-50 win against the Mules. Monday, Dec. 17 the team travels to Las Vegas, Nevada, to face West Texas A&M University.

The women’s basketball team is currently 2-4 in their season after dropping to Newman University here at Lee arena last Tuesday, Nov. 27. The Bods came back from the loss last night, Dec. 6, against Southwest Baptist University with a 73-50 win which improved their record to 3-4. Saturday, Dec. 8, the Ichabods faced University of Central Missouri. A close game ended with Washburn winning by five points, 62-57. The Ichabods’ next game is Monday, Dec. 17, in Las Vegas, Nevada, against St. Edwards University.

Track & Field officially began their season last Friday, Dec. 7. At the Northwest Missouri Mel Tjeerdsma Classic & Multis in Maryville, Missouri, the Ichabods had a record-setting weekend with 23 top-five finishes. Washburn’s next meet is the Graduate Classic on Friday, Jan. 11.

The volleyball team ended their season last week with a final record of 33-5. The Bods managed to fight their way through to the Semifinals match in the NCAA National Championships where they lost to University of Tampa 0-3 (25-23,25-19,25-15).