Tyas Martin: Keeping it in the family 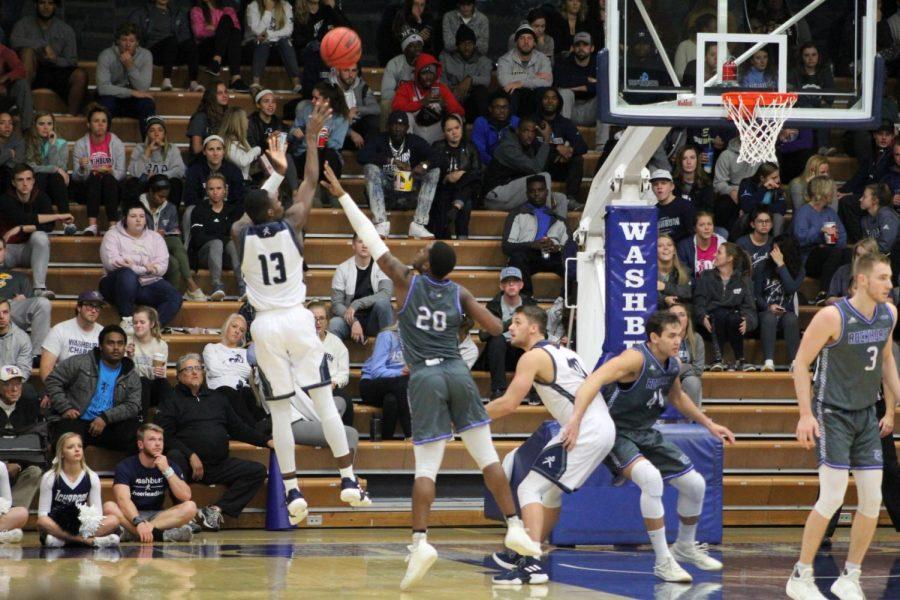 FADE: Senior guard Tyas Martin fades away on this jump shot against Rockhurst. Washburn erased a second half deficit to defeat the Hawks by four.

For senior forward Tyas Martin, basketball is more of an assumed inheritance rather than a hobby.

Growing up in Wichita, Kansas, Martin is the oldest of three siblings. His mother, Nicole Childers, runs a JAG program as a consultant and his father works at Spirit Aerosystems. He says his siblings are taking after the family athleticism, with his younger sister being big into volleyball and his younger brother joining the basketball family tree.

Although running track in middle and high school, Martin says that his choice to pursue basketball wasn’t hardly a decision to make at all.

“Everyone, most of my family has played basketball. Basketball has been the main focus of my family pretty much,” says Martin.

As for the decision to attend Washburn, Martin says that was also sort of a family inheritance.

“My grandpa actually played here at Washburn and he happened to call Coach Chipman [former head coach] and asked if he was interested in any players for the upcoming [2015] season, so I came to play a pickup game and he offered me right there on the spot. The rest is history,” Martin said.

As a communications major, Martin plans on using his degree to become a successful businessman after finishing up his basketball days.

“I’ve thought about playing professionally or if that doesn’t work out, I plan on going into the corporate world to start a different career path,” says Martin.

Since choosing Washburn to further his basketball path, Martins says he has no complains or regrets about his decision.

“I like the culture [at Washburn]. Nothing is given to you, you have to earn it. You’ve gotta earn your sport and your playing time. It keeps you busy. When you think about all the things you have to do for a basketball team, it prepares you for life because you have to balance basketball and school. When you transfer into the real world, it’s sort of an easy transition,” said Martin.

As for basketball inspiration, Martin says he chooses models that display good talents both on and off the court.

“I don’t have a favorite basketball team, I have more of favorite players instead because teams always switch, people leave or get traded. My favorite player would have to be Lebron James. Not just because he’s good on the court but he’s also an icon and positive role model off the court too,” Martin says.

As for family support for his basketball dreams, Martin says he gets plenty.

“My mom comes up a lot. She tries to make every home game since I’m close to where we live. My real dad is from Topeka so we have a lot of family here. . . It’s like a reunion every time I play in a game,” explains Martin.

Although still keeping in contact with former Washburn players that he’s played with, Martin said no love is lost with the new 2018-19 roster.

“Teammates this year, we’re all really close already. We’re all like brothers instead of teammates. We spend so much time together, you bond a lot,” Martin said.

Outside of the basketball court, Martin says he has a hidden talent that not many people know about, but thinks it’s worth mentioning in order to get to know him better.

“A hidden talent that I have, that really only my teammates know, is that I make music. I don’t really rap or anything but I like beats and production and stuff like that. . .I don’t really tell anyone, but I know a lot of people who work in the music industry. I don’t have enough time to pursue it right now, so it’s more of just a hobby but once I’m done with basketball I’m hoping to dive deeper into it,” explains Martin.

Martin will lead the bods into this season beginning Thursday at Allen Fieldhouse in Lawrence.