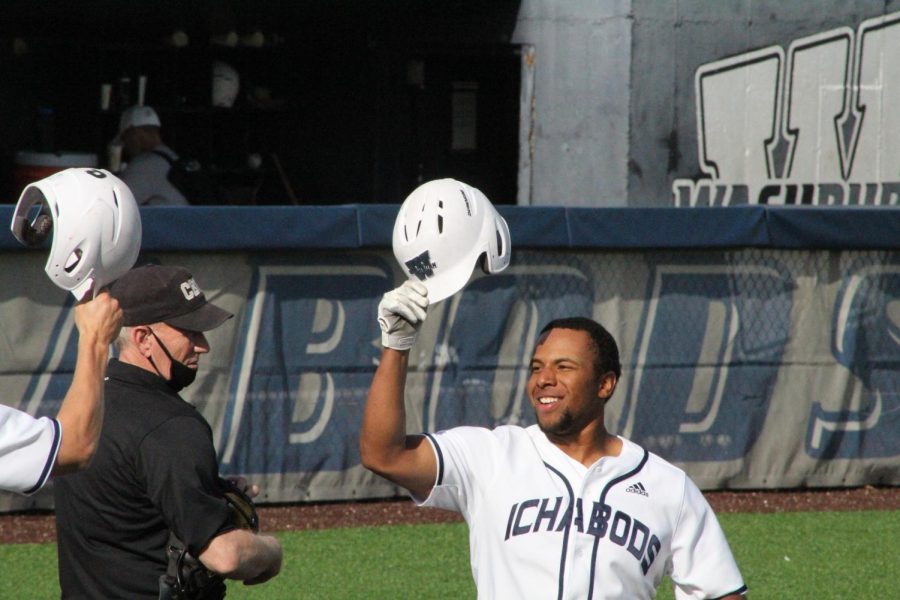 Tip of the cap: Zion Bowlin celebrates at home plate after hitting a two-run home run in the third game of Washburn's series versus Rogers State.

Following a series-opening victory, the Washburn University Baseball team had a doubleheader in front of them to wrap up the series versus Rogers State University.

Gilliam settled in after that, allowing the offense to play catch up. In the second Washburn cut the lead in half with a triple from senior second baseman Carson Sader, driving in sophomore left fielder Tyler Clark-Chiapparelli who had singled earlier.

In the third inning, the Ichabods broke the game open at the plate. Senior first baseman Eric Hinostroza picked up the first RBI of the inning, followed by senior right fielder Peter Shearer before the inning was capped off with a two-run home run over the left-field wall by Clark-Chiapparelli. With a run scoring on a wild pitch in the middle of the action, it made it a 6-2 game.

Gilliam would give up another run in the fifth inning before exiting after six innings giving up only three runs. In the bottom of the fifth, the Ichabods matched the run scored by Rogers State on a triple by senior third baseman Zion Bowlin where he was able to score on an error.

In the sixth inning, sophomore designated hitter Brett Ingram added to the lead with a bases-loaded single that scored two runs, making it a 9-3 game. Junior pitcher Dalton Huggins relieved Gilliam and worked two scoreless innings. In that time Washburn added another pair of runs. This time on a pair of back-to-back singles by Hinostroza and Ingram into right and left field respectively.

That was all the Ichabod offense would have to do before the game was turned over to sophomore pitcher Jared Sharp in the ninth inning. Sharp gave up one run on a hit and a walk before finishing out the game and securing an 11-4 win and a series victory with game three still on deck.

“We are in a good place right now, we feel confident with the way we are playing and the things we are doing,” said Head Coach Harley Douglas.

In the second game of the day, it was Washburn who got started early. A single by Ingram, followed by a double from Bowlin put the Ichabods up 1-0 after one.

In the second inning, the Hillcats put two runners on base against senior starting pitcher Sean McElwee before Christian Merriwether sent a 3-1 pitch over the wall in the left field. Washburn responded quickly in the top half of the next inning, picking up a run on a single from Shearer before he and Bowlin scored on Clark-Chiapparelli’s second home run of the day.

Rogers State came right back the next inning, scoring two on a home run by Jonathan Soto to tie the game at five. But once again the Ichabods had an answer on offense, starting with a home run over the left-field wall by Bowlin that scored two runs.

An error on Rogers State allowed Shearer to reach base and Clark-Chiapparelli made them pay with a double into left field, picking up his fourth RBI of the game and making it an 8-5 game.
In the fifth, the Hillcats got to McElwee with four of the first five hitters collecting hits, including a single that plated two runs. Washburn then turned to junior pitcher Brant Bennett, who recorded the final two outs of the inning.

Junior pitcher Jose Casillas worked a scoreless sixth inning before turning the game over to fellow junior pitcher Zach Philbin in the seventh. It was there that Rogers State tied the game on a groundout to second base that followed a walk and a hit.

The Ichabod’s offense remained quiet, allowing the Hillcats to take its first lead of the game.

“I think what I would like for us to see is to do a little bit better job of getting on base early in the inning, a lot of times we get on with two outs, and then we kind of piece some stuff together,” said Douglas.

That was an opportunity that was not missed, working against junior pitcher Trevor Marreel, who came in to relieve Philbin, they picked up two runs. Both came on a hit by Prescott Horn that Shearer dove for in the right field and missed, allowing the RBI triple to be extended into a two-run play as Horn went home on the play.

As Washburn kept quiet at the plate the game moved to the ninth inning and freshman pitcher Casey Steward took over. Steward allowed two hits, struck out one, and the inning was ended on a double play started by a nice play from senior shortstop Xavier De Leon.

In the bottom of the ninth Bowlin would walk to begin the inning, but the next three hitters all struck out, ending the game 10-8 with the Ichabods on the losing end.

Even with a split on the day, Washburn still picked up a series victory and would look to make it three straight series wins when the team travels to face Fort Hays State next weekend.