Bullpen comes up big in series opening win for Washburn 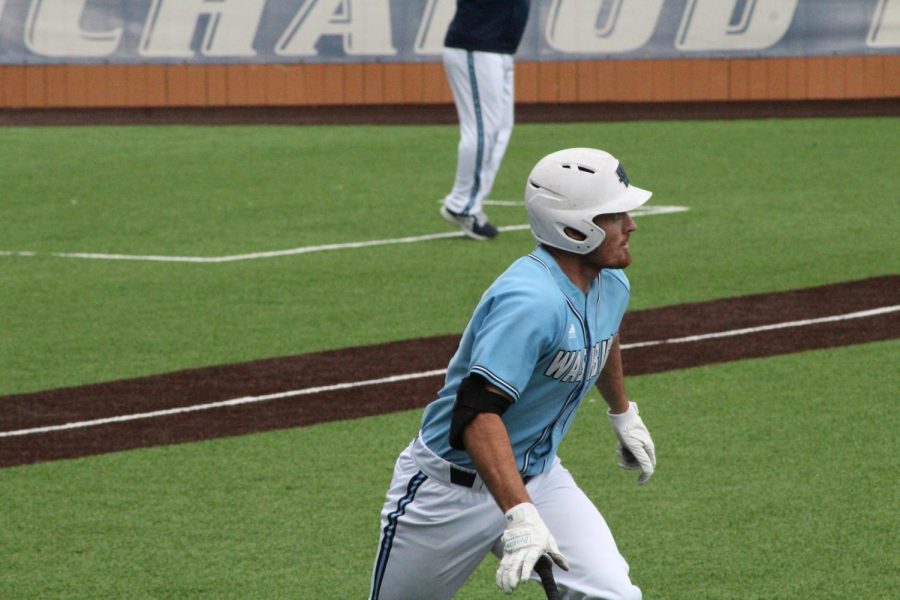 Watch it fly: Senior outfielder Peter Shearer heads to first base after hitting a three-run home run in game one against Rogers State.

After a series victory last time out against Emporia State the Washburn University Baseball team returned to action for a three-game series against Rogers State University. With two wins last weekend the Ichabods entered the game with a record of 10-17 on the season and would look to make it three wins in four games in the first game of the series.

Senior pitcher Rane Pfeifer started the game on the mound for Washburn, and he posted a scoreless first inning, striking out two batters. After the Ichabods went down quietly in the bottom half of the inning the Hillcats got started quickly in the second inning with a leadoff solo home run by Brandon Bradshaw. Rogers State picked up another hit and two walks in the inning but was held to just one run.

Junior catcher Kros Bay picked up the first hit for Washburn in the bottom of the second inning, with a single up the middle, but could not be brought around to score. The Hillcats threatened again in the top of the third inning after Pfeifer walked two batters before recovering to strike out a hitter for the third out.

Walks were a problem again in the fourth inning for Pfeifer, who gave up a hit and walked two, loading the bases with two outs. A single up the middle scored two runs and ended the day for Pfeifer, who was relieved by junior pitcher Zach Philbin. Philbin responded to the high leverage situation well, striking out the first batter he faced to end the inning.

“I love those types of situations, that’s what I feed off of, ever since JUCO, I just got to focus, trust my stuff and hope to make some good pitches,” said Philbin.

The positive momentum continued into the bottom half of the inning, as the first three batters all reached base for the Ichabods. Sophomore designated hitter Brett Ingram started the inning with a single and he was brought home on a triple into a deep right-center field by senior third baseman Zion Bowlin. Senior right fielder Peter Shearer continued the rally, doubling into left-center field to score Bowlin.

After Shearer was moved to third, he was able to score on a wild pitch and tie the game at three after four innings. Philbin continued his strong pitching the next two innings, setting down six of seven hitters to move the game into the bottom of the sixth inning.

Bowlin led off the inning with his second hit of the day, a single into center field, and was eventually moved to third base before being sent home on a single into right field by Bay to take a 4-3 lead. A fly ball into right field off the bat of senior center fielder Cole Emerson was caught on a diving play and Bay was doubled off of the second base, ending the inning.

In the seventh junior pitcher, Trevor Marreel relieved Philbin, striking out two in his first inning of action. In the bottom of the inning, the offense for Washburn got hot, starting with a single to right field by senior infielder Carson Sader who entered the game as a pinch hitter. With two outs in the inning, he was brought home on a solid single into right field by Ingram. After a walk by Bowlin, there were two runners on for Peter Shearer to hit a home run that just crept over the fence in right field.

“I was just trying to simplify a lot and see good pitches to hit and try to be short to it, and it ended up working out for me,” said Shearer.

The scoring gave senior pitcher Braden Minor, who entered in relief of Marreel, a five-run lead as the eighth inning began. Minor would not need the lead in his first inning as he retired Rogers State in order.

After the Ichabods went down quietly in the bottom of the inning Minor would return in the ninth inning to finish the game, and that is what he would do, facing only three hitters, ending the game 8-3.

“I just think we are starting to believe in ourselves a little bit,” said Head Coach Harley Douglas, “It’s just nice to finally get 20-30 games in and you start to know what you have.”

The win moved Washburn’s record to 11-18 on the season, including three of the last four. They would get two chances to win a second straight series on Sunday that would finish out the series against Rogers State.