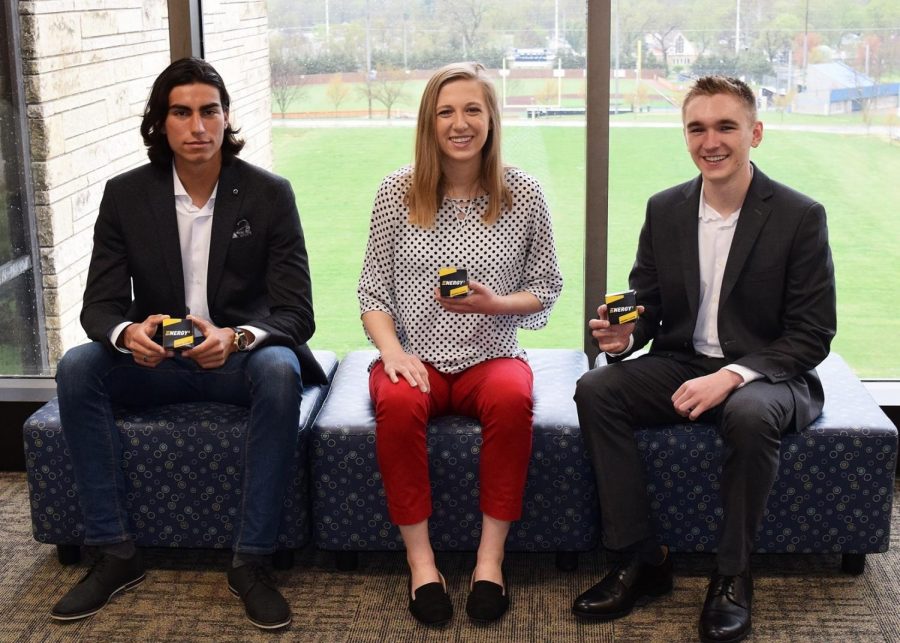 Bods with a plan: (From left to right) Raul-Alin Dicu, Kendall Beemer and Taylor Keller. This Bizbod team is ready to take things to an international scale.

It’s not every day that Washburn students get the chance to show off their skills in an international competition against teams from around the world, especially during a pandemic.

Three Washburn School of Business students have made it into the finals of the annual NIBS Worldwide Business Plan Competition with their innovative ‘Energy Cube’ product.

The Bizbod team consists of Raul-Alin Dicu, Taylor Keller, and Kendall Beemer. They will be taking their Energy Cube product and a fully developed business plan into the Network of International Business Schools competition in mid-May, potentially winning up to €1000 euros or $1,197.50 if they get first place along with a Championship Trophy.

“I feel like we have the opportunity to show that we know what we’re talking about,” said Keller.

The three-person team recently won first place in the Washburn Business Plan Competition earlier this year on April 13 with their Energy Cube idea. They received $3,000 in prize money for producing a stellar business plan to go with their product.

The Energy Cube itself is based on the concept of a granola bar except that it has three layers inside it which a consumer can eat at different points during the day when his/her energy is flagging.

“In the cube, we can fit three cubes, which you can eat all at once, if you want, or you can eat it throughout the day,” said Dicu. “So we kind of sustain your energy as your day goes forward. Because usually, we see dips in energy in the morning, kind of between breakfast and lunch and then between lunch and dinner around like 3:00 or 4:00 pm. So we said it would be the right time to kind of just open the package up and take another layer as needed.”

“So David Price and Dmitri Nizovtsev, those two professors reached out to us and said, ‘Hey, we know you’ve got this product and we think that if you could put a plan together for it, it could make it,’” said Keller. “And so that’s how we got into the competition.”

The team had to develop a business plan that ended up being 28 pages long and submit it to the competition by March 1 this year in order to participate along with a 7-minute long pitch video describing the market opportunity and proposed product/service.

Each member of the team had a specific role in the execution of the business plan and creation of the pitch video that was based upon their areas of expertise and education.

Kendall Beemer, a senior majoring in marketing and finance with a minor in leadership, focused on the marketing of the Energy Cube.

“So I did a lot of research into the industry and looking at competitors that were out there and all kinds of stuff like that,” said Beemer. “I focused on the marketing of our products, figuring out what was different about it and how we could really use that to our advantage in this competition, and then kind of setting up some promotional things as well.”

Raul-Alin Dicu, a senior in finance and marketing, helped the team succeed by providing his teammates with his knowledge of finances.

“I was primarily the finance person,” said Dicu. “I took care of all the projections, all the startup costs, all the assumptions for the forecasts, and basically everything that was number oriented.”

Taylor Keller, a senior in entrepreneurship and finance with a minor in leadership and a certificate in Kansas Insurance, provided both the original idea and packaging designs for the Energy Cube.

“The story there is that I ran a lot of track and cross country in high school,” said Keller. “I would always take food with me, but like, needed some sort of snack, especially like during track. I’d run and then there’d be an hour and a half or something between the next time that I would run. And so I always needed something that was just enough to fuel me, but not like that too much. So that’s what I started carrying around with me.”

Each member of the team also expressed a desire to carry their Energy Cube idea forward if it meets success during the NIBS Competition, Dicu being especially excited about the prospect.

“I think if Taylor, Kendall, and I decided to pursue these products and bring it to life and bring it to market, I think that would be an interesting journey,” said Dicu. “We haven’t decided on that yet, but it is a possibility.”

The development of the business plan and pitch video required the team to work many late nights in order to get it completed by the March 1 deadline.

“We met a couple of times a week, we would usually meet either late at Morgan Hall, or Taylor’s office building,” said Beemer. “We would just work late into the night. One night we left Taylor’s office at about, I don’t even remember, maybe like 3:00 am or something like that. Just trying to get everything done. We put in a lot of late nights and a ton of effort. But I mean, so far it has been a really good experience and has been pretty successful.”

Under normal circumstances, the Bizbod team would be traveling internationally to pitch their product to a panel of judges but this year the competition will be held over Zoom.

Beemer, Keller, and Dicu will all be graduating in May as well, making the NIBS Competition one of their last activities as Ichabods.

“I think that it was cool to see how anybody can really create a business and start something, it just takes an idea, it takes a lot of hard work,” said Beemer. “I think that we have the support around us at Washburn to be able to do that well.”