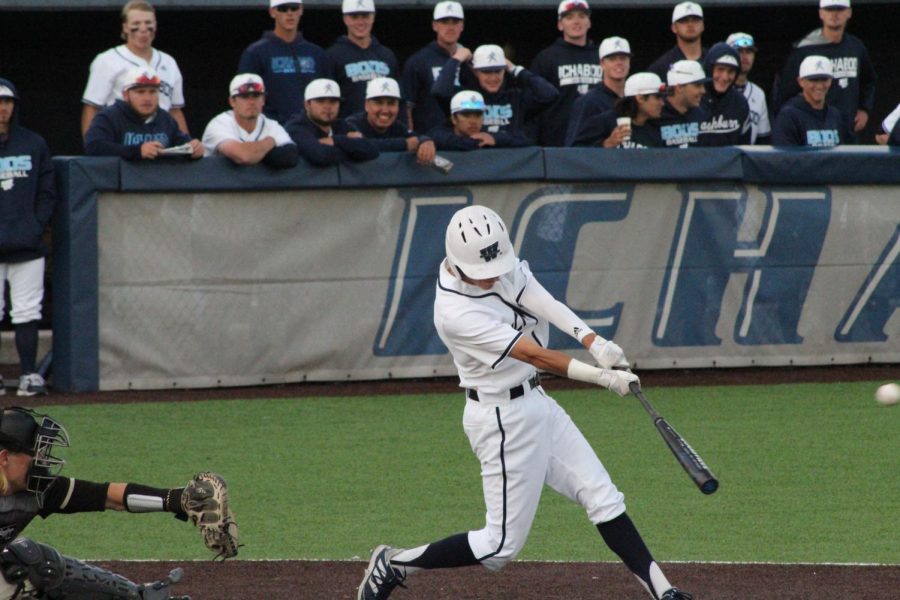 Barrel it up: Senior outfielder Cole Emerson sends a sacrifice fly into the outfield to score a run in Washburn's 5-4 victory over Emporia State on 4-10.

After a demoralizing loss in game one of the day, the Washburn University baseball team was looking to at least leave the series against Emporia State University with a series win. The 13-10 loss moved the Ichabods to 9-17 on the year as the second game of the day began.

The second game began the same as the first for Washburn as the Hornets took an early 1-0 lead on the Ichabod’s senior starting pitcher Sean McElwee. Washburn was not going down in order at the plate but could not string together enough hits to score in the first two innings. Senior shortstop Xavier De Leon continued his strong day with two hits in his first two plate appearances, but could not be brought home.

McElwee settled in after the first inning, only giving three hits over the first three innings to go along with three strikeouts. In the fourth inning, Emporia State struck again, notching four hits and scoring another two runs to take the lead 3-0. The Hornets added another run in the top of the fifth inning off of a solo home run by Chanler Bloomer.

In the bottom of the inning, the Ichabods got some help from Emporia State. The inning began with three straight hit batters, which was followed by sacrifice flies from senior center fielder Cole Emerson and De Leon respectively. Each hit scored a run to cut the deficit in half, leaving the score at 4-2.

In the next inning senior right fielder Peter Shearer jumped on the first pitch he saw and sent it over the right-field fence to make it a one-run game. That was not all Washburn would do in the inning as senior third baseman Zion Bowlin was walked and then advanced to third on a single by junior catcher Kros Bay. Bowlin was then scored on a sacrifice fly into right field by sophomore left fielder Tyler Clark Chiapparelli to tie the game.

Junior pitcher Zach Philbin took over for McElwee after six innings and threw a scoreless seventh inning in just seven pitches. It took a little more effort, and some good defensive plays by Emerson in the center and senior second baseman Carson Sader, but the result was the same as the game moved past the top of the eighth.

In the bottom of the eighth, it took until there were two outs to get started, but the Ichabods rallied to take the lead. Bowlin got it started with a walk which was followed by Bay who also walked before Bowlin was scored on a single up the middle by Clark-Chiapparelli to make it a 5-4 game heading into the top of the ninth.

“He sent the first-pitch curveball again to me, but I was sitting on that fastball and sure enough I knew he was going to throw it early and I went with it, hit it where it was pitched, was breathing well, and enjoyed it,” said Clark-Chiapparelli.

Junior pitcher Joel Casillas came on in relief of Philbin to close the game for Washburn. Casillas allowed one runner to reach but struck out two batters, leaving the Hornets with one out remaining and a runner at second base. The next hitter drilled a hardball towards Sader at second base who bobbled it but recovered quickly, rifling the ball to Bay at the plate to tag out the runner who tried to score on the bobble but came up well short, ending the game at 5-4.

“Just having to fight and push to the nail, I was very proud of the way that our guys came out and battled,” said Head Coach Harley Douglas.

The heads-up play gave Washburn a series victory and earned Casillas his first save of the season as well as Philbin his first win. The 5-4 win moves the Ichabods to 10-17 on the season, which will remain unchanged until they host Rogers State University in a three-game series beginning on April 17.