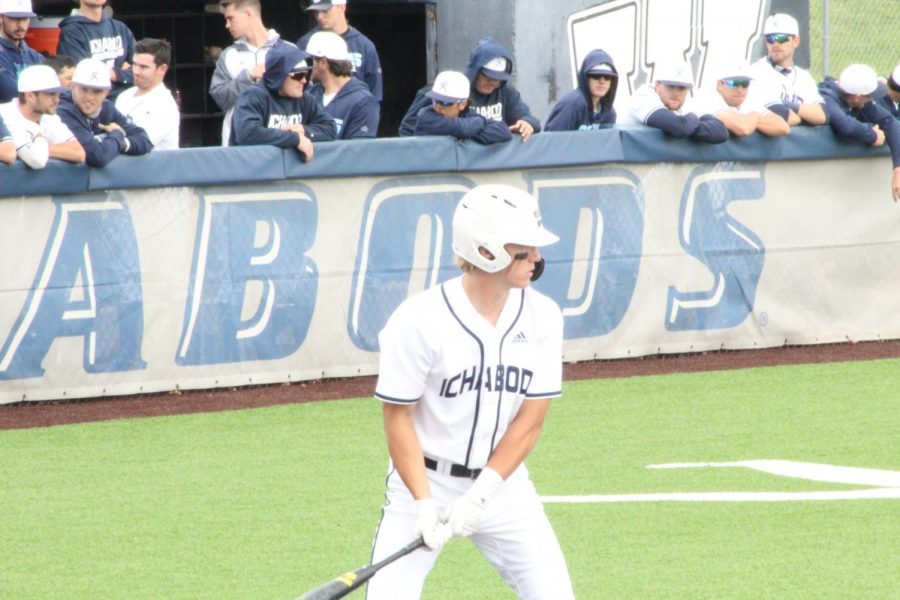 Loosen up: Senior outfielder Cole Emerson gets ready to bat in the first game of the doubleheader against Emporia State.

Senior starting pitcher Brock Gilliam ran into trouble in the top of the first inning, allowing two hits and a walk which resulted in a run but was able to recover and strike out the side. In the bottom of the inning, senior first baseman Eric Hinostroza responded quickly, taking a 1-1 pitch over the field in right-center to tie the game.

Washburn continued the power-hitting in the bottom of the second inning with three doubles that scored three runs. Sophomore second baseman Tyler Clark-Chiapparelli had the first double, which scored junior third baseman Zion Bowlin who had walked. Next, it was senior center fielder Cole Emerson and senior shortstop Xavier De Leon who doubled back-to-back, scoring two runs and extending the lead to 4-1.

After the first inning, Gilliam got in a good rhythm, throwing three straight scoreless innings, with a good balance of keeping the ball in the air and ground to go along with his six strikeouts. The Ichabods made more noise in the bottom of the fourth inning. Clark-Chiapparelli led off the inning with his second hit of the game and senior left fielder Peter Shearer did the rest, lifting a ball over the fence in right-center, extending the lead to 6-1.

That smash would not be the most devastating of the inning for the Hornets. De Leon doubled and Hinostroza walked, putting two runners on base for junior right fielder Parker Dunn to hit an opposite-field shot over the fence in right-center.

Junior catcher Kros Bay tacked on another run, hitting a single into center field to score sophomore designated hitter Brett Ingram who singled earlier in the inning. The offensive explosion left the Ichabods with a 10-1 lead after just four innings.

With a sizable lead, Gilliam came out looser in the fifth inning, giving up four hits and two runs. The inning ended with Washburn still with strong control over the game after Kros Bay delivered a strong throw down to De Leon at second base to tag out a stealing runner, leaving the game at 10-3.

Sophomore pitcher Jared Sharp relieved Gilliam in the sixth inning and completed it without allowing a run. In the process, Parker Dunn was injured and had to leave the game after falling while pursuing a ball in right field, which he still managed to reel in from his knees.

“He just twisted his ankle, the athletic training staff does a great job here and he will get in there starting tomorrow, and get some stuff going, and hopefully it’s just a high sprain,” said Douglas.

As Washburn’s offense slowed down, Emporia State continued to chip away at the lead. In the eighth inning, Brigham Mooney took a pitch from Sharp over the left-field fence to score two runs, making it a 10-5 game as it moved into the ninth inning.

With the bases loaded, another Ichabod struggled to set down Mooney as he doubled down the left-field line, clearing the bases and tying the game at 10. Washburn continued to sift through bullpen options, throwing a total of five pitchers in the inning, but a combination of hard hits and errors in the field allowed the Hornets to score an additional three runs, taking a 13-10 lead.

The Ichabods went out quietly in the bottom of the ninth, completing the nine-run comeback for Emporia State and ending the first game of the day.

“We all came together, (between games) and we have had a few games like that where we were just so close and it just didn’t work out but we weren’t stressing at all,” said Clark-Chiapparelli on refocusing after the loss for the next game.

There would not be much time for Washburn to complete a mental reset before the second game of the doubleheader would begin shortly after.