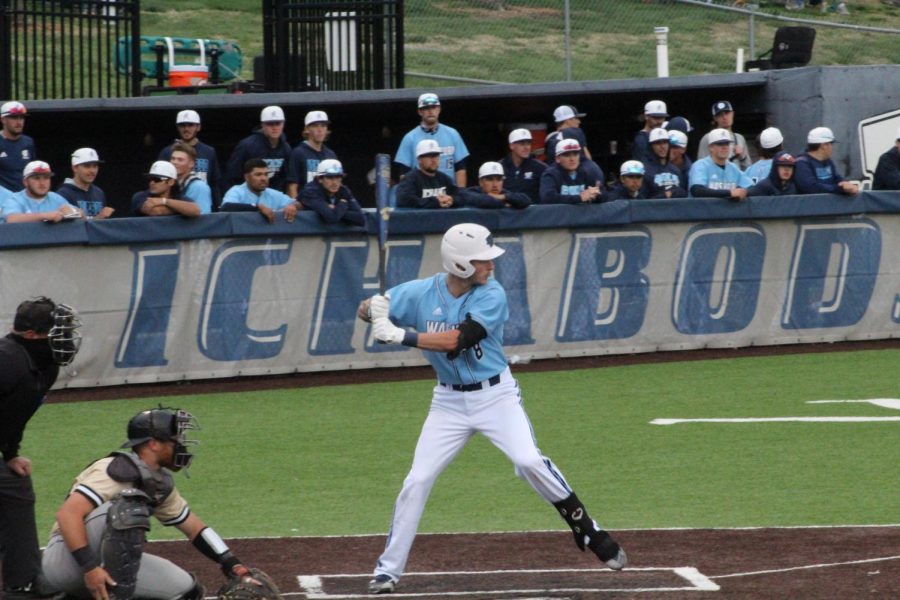 Load up: Sophomore infielder Tyler Clark-Chiapparelli gets ready to hit in the sixth inning of Washburn's 5-2 victory.

After a short one-game matchup against Pittsburg State University that resulted in a second straight loss, the Washburn University baseball team was set for a three-game series against Emporia State University. The Ichabods had dropped six of the previous seven games and would look to get back on track against a Hornets team that entered the game with a record of 10-14.

Junior starting pitcher Rane Pfeifer struggled with his command early on, walking two batters and hitting another to load the bases in the top of the first. When it was in the zone the hitters were fooled as he matched the free baserunners with three strikeouts.

The first hit for Emporia State came in the second inning and it was a costly one, with a runner on first. Jack Maki took a 1-2 pitch and sent it over the right-field fence to give the Hornets an early 2-0 lead.

Washburn got one back in the bottom of the inning when junior catcher Kros Bay took an 0-2 pitch over the left-field fence to make it a 2-1 game. Pfeifer followed it up with his first perfect inning in the top of the third.

The Ichabods continued to battle back in the bottom of the third and started with a double from senior center fielder Cole Emerson who was then brought home by senior first baseman Eric Hinostroza to even the score at 2-2. Hinostroza was thrown out attempting to steal second base but junior right fielder Parker Dunn salvaged the inning hitting his team-leading sixth home run into straight away center field putting Washburn ahead.

“Coach Crimmins and coach Douglas pulled us aside and told us that we need to start being aggressive,” said Dunn, “And put the pressure on them and not on ourselves.”

Pfeifer continued to bounce back strong after a shaky start, with scoreless frames in the fourth and fifth. While he was not striking out batters like he was early on, he was also not putting runners on base without making them earn it which led to success as he finished his day with a strikeout to end the top of the fifth.

“Honestly, I saw a guy down in the bullpen and I was like I’m not coming out of this game, I want to win and I want to show my team that I am going to compete for them every pitch whether I have it or don’t,” said Pfeifer about battling through early struggles.

In the bottom of the fifth inning, it was Emerson who got things started once again with a single, Hinostroza walked to advance Emerson and sophomore designated hitter Brett Ingram finished the job slashing a single into left field to make it a 4-2 game. Junior third baseman Zion Bowlin repeated the process, this time to center field to add another run.

Junior pitcher Joel Casillas took over for Pfeifer in the sixth inning and picked up right where he left off, striking out three hitters in two innings while allowing no runs. Casillas handed off pitching duties to fellow junior Dalton Huggins who struck out the side in the top of the eighth inning.

“Joel came in and did a great job and set the tone, and then Huggy (Dalton Huggins) came in and was really, really good,” said Head Coach Harley Douglas.

The Ichabods threatened to score in the bottom half of the inning, picking up two hits but failed to add to the lead. Huggins continued the strong effort from the bullpen to finish the game, earning the save as Washburn picked up a 5-2 win.

“In this conference, it’s such a great hitting conference that when we get an opportunity, you know, you get down, you don’t panic,” said Douglas.

The win moved the Ichabod’s record to 9-16 on the season and will give them the chance to get double-digit wins on the season as the series against Emporia State on Saturday, April 10.