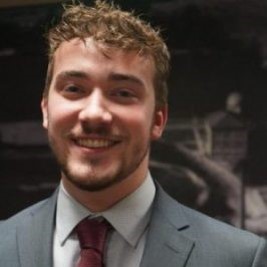 Suit and Tie: Senior Jaron Caffrey is the WSGA Chief of Staff for the 2020-2021 academic year. He encourages students to become interested in WSGA and consider joining the organization in it's efforts to serve the campus community better.

Caffrey got interested in WSGA before he started his first year; after hearing from his SOC at New Student Orientation, he knew this organization would be an important one to get into.

For his second collegiate year, he applied and got the position of Chief of Staff for the Smith/ Campa campaign in 2020.

“I felt, you know, I had lots of different skills and experiences and knowledge that can be useful for something like that,” said Caffrey.

“I’ve worked for Jaron since he started his freshman year so I think we’re rounding out three years here,” said Abby Trautman, WSGA President. “Honestly, it’s been a really great experience; he’s done a lot for the Senate, he’s always really cared about the Senate. So, honestly, it’s been a lot of fun.”

Caffrey related how much WSGA has benefitted his college experience.

“Number one, just been able to meet a lot of new people. It’s been phenomenal, having a very diverse group of people from lots of majors that you definitely wouldn’t probably associate with on a normal basis,” said Caffrey.

He has also enjoyed being able to help groups and organizations on campus financially.

“You know, it’s a lot of fun to do that to be able to give money away, especially when it’s not your money,” said Caffrey.

Caffrey said during the height of the pandemic, he headed a project to give away $15,000 in gift cards to students to help them financially, which was an amazing experience in his words.

“More recently, when the university announced they were canceling spring break, you know, we [WSGA] immediately jumped into action to put pressure on the university administration that is to figure out how exactly we can get some kind of break,” said Caffrey when he was discussing how WSGA fought for the students in the spring of this year.

Caffrey says it’s cool to see the changes that you can make for people and to see all of the things that you can do through the organization.

He goes on to advise anyone interested in WSGA to step out of their comfort zone and go for it.

“It really is all about this putting yourself out there, and you really never know what’ll happen when you walk through an open door, but when you’re able to see those open doors,” said Caffrey. “I think it’s important to seize those whenever you can and take advantage of those because I’m just very thankful that I did”.