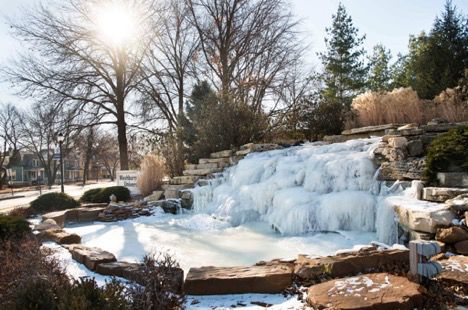 Consistent precipitation and a flash freeze caused Washburn University to cancel evening classes on Tuesday Jan. 22, but many students and faculty are confused as to why the university was open on Wednesday, Jan. 23 when there has been little improvement to road conditions.

“The thing keeping me from getting to campus is due to last night’s wind,” said Allie Galvin, a music minor. “My car is literally covered in ice. I can’t pull the door handle in fear of breaking the handle off the car.”

Many students have shared their concerns on social media as they waited for what seemed like an obvious decision. The conversation began when a student posted a comment about the likelihood of the university canceling classes Wednesday.

The Washburn University Facebook page responded to the comment by stating that a decision would be made Wednesday morning.

The comments poured in as students, faculty and members of the Topeka community expressed their opinions in hopes that class would be canceled for the better of everyone’s safety.

Topeka Public Schools district 501 decided to make the call to cancel all activities the night prior, and Washburn students wished the university would have done the same.

“Some students have kids who don’t have school today and no babysitter scheduled,” said Larrisa Maye, a mass media student. “I don’t want to miss class. It would be nice to know… the sooner the better.”

The icy road conditions have caused multiple reported accidents, slide offs and deadly crashes along many of the state’s freeways.

“Road conditions are not going to see much improvement overnight and we aren’t going to see much improvement until late in the afternoon on Wednesday when the sun can help penetrate the ice lying underneath the snow,” said Chief Meteorologist Matt Miller during the 10 p.m. KSNT newscast. “It’s best to stay indoors, I do not advise traveling tonight and for much of the day tomorrow.”

This isn’t the first time the university has decided to remain open despite closures by many local institutions. Just last year, Washburn University officials decided to keep their doors open when other activities were canceled.

“I think it’s selfish and against better judgment for Washburn to continue classes today,” said Taylor Ross, a level-one nursing major at Washburn Tech. “This goes to prove that once again, the Washburn officials, or the individuals making these decisions, does not care about the safety of staff and students.”

Facebook wasn’t the only social media platform where conversation ensued. Chris Jones, assistant professor of religious studies, took to Twitter to obtain some clarification to the university’s decision.

“I’m hearing from a lot of students who would like some clarity about classes today,” Jones said. “I assume it’s classes as usual?”

Officials responded by stating that policy restricts them from making an open statement to the public, and then carefully responded with a “but yes, we are open.” The reply continued by stating that students should work with professors if they’re unable to attend.

Jones wasn’t the only instructor concerned with student safety as Laura Murphy, professor of archaeology, said the importance of clear communication.

“Simple communication is so important to ease confusion and to show care when everyone else around seems closed,” Murphy said. “K-State clearly alerted students that they were working on roads and sidewalks… KU alerted students that all campuses were closed today… Baker went 2-hour delay.”