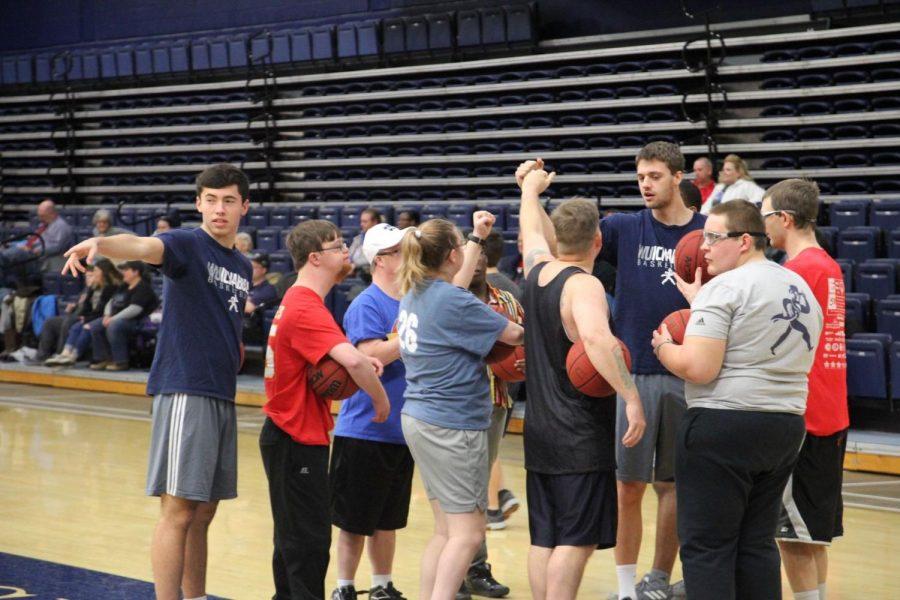 Tyler Geiman (left) and David Salach (middle of group) gather their group together for a quick pep talk before they send them to their next station. Nearly 50 athletes participated in the annual Special Olympics basketball clinic.

A special event took place Sunday, Jan. 13 at Lee Arena. The Washburn men’s basketball team welcomed a group of Special Olympics athletes to Washburn for a hands-on clinic. Around 50 athletes of all ages joined together to play basketball and learn a thing or two from the Washburn players.

The day started out with the athletes learning how to properly stretch to avoid injuries. Then they transitioned into groups and rotated around different stations. The stations were the different aspects of playing basketball, such as passing, layups, rebounding, free throws and ball-handling.

The athletes were excited and full of energy all day.

“The athletes give us a ton of energy with their enthusiasm with their passion for the game,” said head coach Brett Ballard.

That energy was on full display as they took part in four-on-four games later in the day. Three of the Special Olympics athletes teamed up with one Washburn player on their team to form a team of four and battle it out for seven minutes against another team.

Many of the Washburn players look forward to this clinic every year, and it is one of their favorite events to put on.

“Just seeing all the love that people have for the sport of basketball, and it’s something that I’ve always enjoyed, so to see people share that same enthusiasm is pretty cool,” Salach said.

The influence that the Washburn coaching staff and players have on these athletes is tremendous.

“It’s funny because we’ll see them around town, which is cool, and a lot of them come to our games, which is great, and they enjoy supporting our players,” Ballard said.

The day ended with the Washburn players spending some time to sign various posters for all the participants.

The Ichabods currently sit at 11-3 for the year and will return to action Wednesday, Jan. 16 to face the Nebraska-Kearney Lopers.