Ichabods even series against RiverHawks in first game of doubleheader 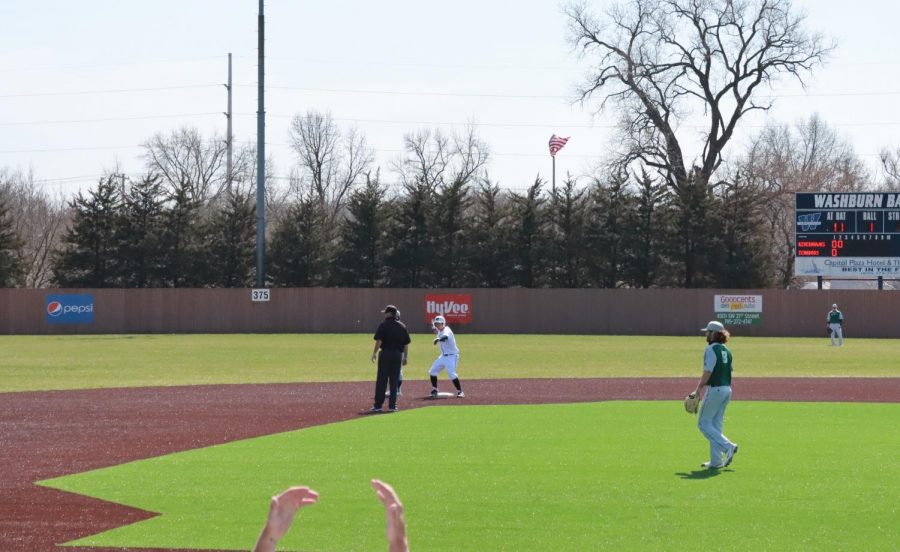 Take a second: Right fielder Parker Dunn celebrates on second base after leading off the inning with a double.

After suffering a 13-6 loss on Saturday the Washburn University Baseball team was back in action on Sunday for a doubleheader to finish off the three-game series against Northeastern State University. Wins in both games would prevent the Ichabods from dropping their third straight series.

The RiverHawks were threatening right from the start, collecting two hits and a walk in the first inning to load the bases. Senior pitcher Brock Gilliam had to throw 27 pitches but escaped unscathed after a called third strike to end the inning.

After a quick first inning, Washburn’s bats came alive in the bottom of the second, scoring a run on a groundout by sophomore second baseman Tyler Clark-Chiapparelli that scored junior right fielder Parker Dunn had doubled earlier in the inning.

The lead was extended for the Ichabods in the next inning. Following an error that allowed senior center fielder Cole Emerson to reach base and eventually score off a single by senior first baseman Eric Hinostroza to leave the inning with a 2-0 lead.

After the first inning, Gilliam settled in for Washburn, striking out ten batters through five innings, including striking out the side in the fifth to keep Northeastern State scoreless. Gilliam collected another strikeout in the sixth and the defense closed the door with a four-six-three double play.

“Just attacking the zone, getting ahead early (worked well today), my off-speed like slider, curveball was good today so it helped a lot keeping them off balance,” said Gilliam.

The Ichabod’s offense had been stifled for a few innings before coming back to life in the bottom of the sixth. A single and stolen base by junior designated hitter Zion Bowlin put him in a position to score off a single by Clark-Chiapparelli. He immediately stole second base and was able to score after junior catcher Kros Bay hit a looping ball into center field, making it a 4-0 game.

Washburn made back-to-back innings putting up a crooked number, picking up three hits in the inning. Senior shortstop Xavier De Leon got it started with a double, sophomore third baseman Brett Ingram followed suit, scoring De Leon, and Dunn brought Ingram home for the sixth run of the game.

In the eighth, Emerson reached base for a second time and De Leon and Hinostroza combined to bring him home and cushion the lead even further. After seven innings, Gilliam would exit tying his career-high of 13 strikeouts. Freshman Cole Warner would throw a scoreless eighth and junior Lucas DeGarmo, pitching with a big lead would give up a few runs before finishing the game as the Ichabods would win 7-4.

The win moved Washburn to 6-9 on the year but there would be no time to celebrate as the second game would be starting the same afternoon.