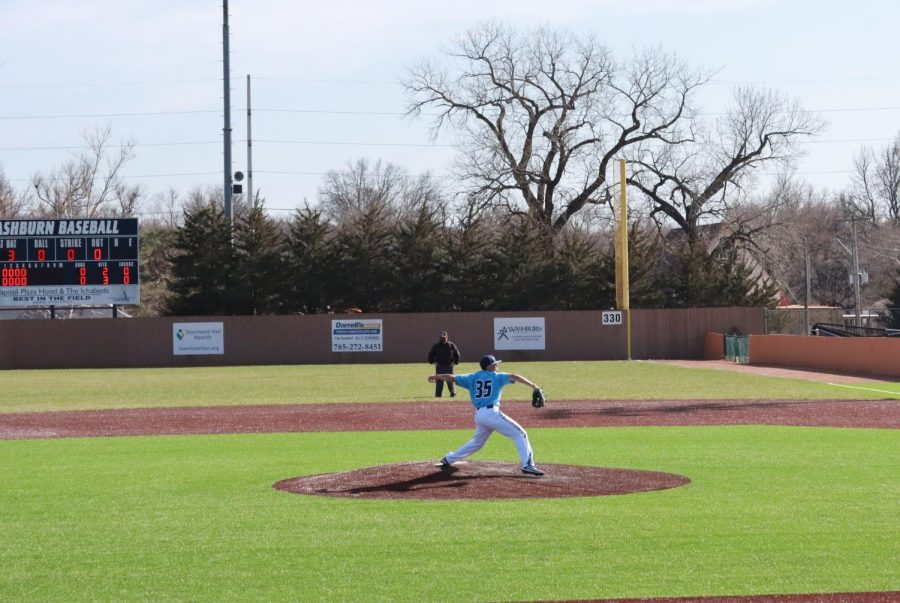 Coming off a 2-1 series victory over Pittsburg State University the Washburn University baseball team had some positive momentum heading into the first game of their weekend series against Northeastern State University. The RiverHawks entered the game with an 8-3 record, making the 5-8 Ichabods the underdog as they attempted to continue their success in conference play.

Both teams got off to slow starts offensively, with each collecting one hit in the first two innings without being able to string anything together which resulted in runs. Washburn was led by junior pitcher Rane Pfeifer who threw a scoreless four innings, capped off by a five-four-three double play to get out of the fourth inning.

Northeastern State continued to throw a variety of looks at the Ichabods on the mound, using a new pitcher each of the first five innings. The strategy backfired in the fifth inning, after a leadoff single by junior catcher Kros Bay. Washburn played small ball, laying down back-to-back bunts including one that went for a single from senior left fielder Peter Shearer.

Those well-executed at-bats left runners on second and third as senior shortstop Xavier De Leon did his job and drove in Kros with a sacrifice fly into left field. The scoring did not stop there as a throwing error on the RiverHawks plated another runner and left the inning open for junior right fielder Parker Dunn who smashed a pitch into the right-center gap to score two more runs and cap off a four-run inning.

Northeastern State was quick to respond in the top half of the sixth inning, with a batter hit by a pitch and a single. There were two runners on when senior Reid Fehr hit a line drive shot over the 330-foot left-field fence to score three runs. The damage could have been worse if not for a diving play made by Shearer out in left field.

The runs did not rattle the Ichabods as their offense continued to click, scoring two more runs, making the score 6-3. Washburn picked up a walk and two more hits in the inning, including a double off the left-field wall from De Leon that scored both runners.

The top of the seventh inning was a struggle for the Ichabods on the mound, as they used three pitchers to get through the inning. It was not without consequence as the RiverHawks put six players on base in the inning, scoring three to tie the game at six.

Washburn threatened to score in the bottom of the seventh, forcing Northeastern State to throw 29 pitches and drawing two walks, but could not put anything together as the game moved into the eighth inning. In the top half of the eighth, Northeastern State was within two strikes of being put away before sophomore Tucker Dunlap hit a hard line drive to left field that cleared the previously loaded bases following an error in the field, giving them a 9-6 lead.

Washburn went out quietly in the bottom of the ninth to finish off the first game of the three-game series. The two teams finished off the last two games of the series on Sunday, March 21 in a doubleheader.