Men’s basketball advances to second round of MIAA tournament 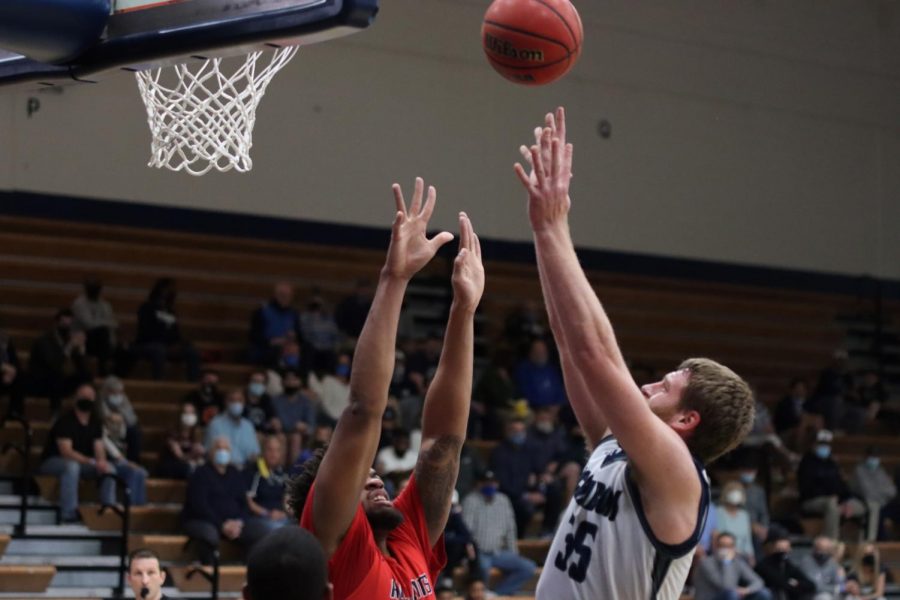 After a 16-6 regular season the Washburn University Men’s basketball team was rewarded with the second seed in the MIAA tournament. In the first round they would play host to Rogers State University who was the seven seed after finishing 11-11. The Ichabods swept the season series between the two, going 2-0. A similar effort would earn them a bid in the tournament semifinals.

Both sides started out hot offensively, with each team hitting its first two attempts from behind the arc. That was not all that was working early for Washburn as sophomore guard Tyler Nelson also scored four points in the first three minutes off of some timely cutting. A second three pointer before the media timeout from junior guard Jalen Lewis gave the Ichabods an early 14-8 lead. Offense was harder to come by for Washburn after that early run, but an aggressive defense was able to force six turnovers in the first eight minutes of action.

Turnovers began to hurt the Ichabods as well, committing seven in just over the first 13 minutes of the game. Once the offense settled down again, a third three from Lewis, and a turnaround shot by senior guard Tyler Geiman gave them an 11-point lead. The Hillcats came back with a 7-0 run of their own but Washburn turned right around and ended the half on a 9-2 run resulting in a 38-27 lead.

Once the second half began the floodgates opened for the Ichabods as they began the half on an 18-2 run. In that time Nelson knocked down two three-pointers, and Geiman hit one, giving him 18 points in the game.

“We normally play inside out, and when our big draws that much attention it just gets us open shots on the outside,” said Nelson.

After the second three pointer of the half from sophomore guard Connon Deffebaugh, Washburn would lead 60-33 with just over thirteen minutes to play. Even when the Ichabods defense slipped from great to good the offense was still moving well enough to maintain a sizable lead.

“I thought we were really good defensively that first 30 minutes, we were locked in, we rebounded the ball well, and we really forced them into some tough shots,” said Washburn Head Coach Brett Ballard.

The teams traded baskets for several minutes after that before Rogers State was able to cut the lead down to 18 with just over five minutes remaining. Washburn responded immediately, with Geiman and junior forward Jonny Clausing each scoring a basket to take a 73-51 lead.

The Hillcats went on another run shortly after, but it would prove to be too little, too late as each team emptied the benches with just over a minute to go and the Ichabods possessing a 16-point lead. After some end of game formalities Washburn would leave with a 78-59 victory.

“It was kind of ugly basketball at the end of the game but that’s why we built that lead up, so just glad we got it done, one down and we are excited for Friday” said Geiman.

Next up for the Ichabods is a trip to Maryville, MO., for a semi finals matchup against Missouri Western State University and a chance to advance to the MIAA tournament finals.