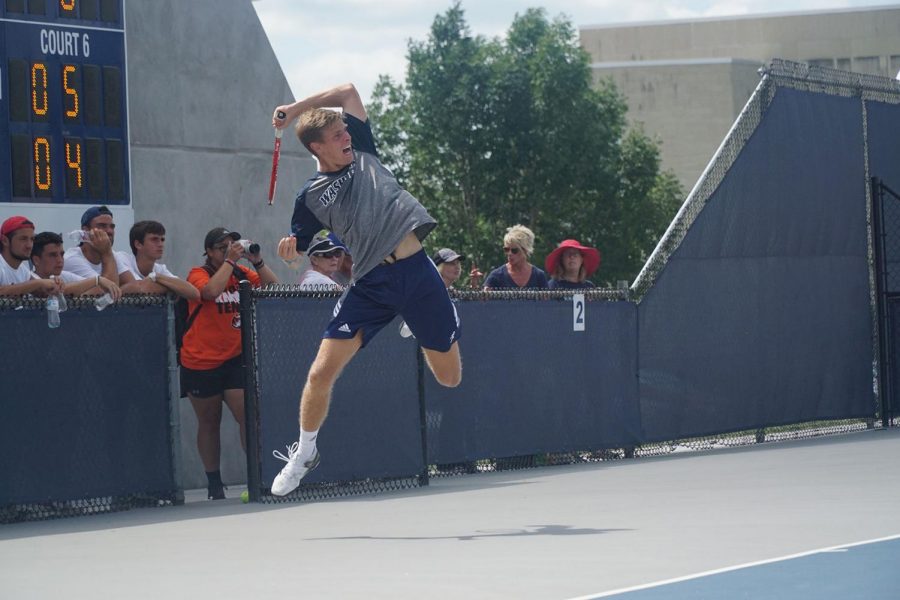 Winner winner: Junior Paul Haase shows off his athleticism after striking the ball. Haas has been a key component to the Ichabod tennis team during his time here.

Junior Paul Haase is one of the many foreign athletes that make a big impact playing tennis here at Washburn.

Haase comes from Bielefeld, Germany, a city no bigger than Wichita. He was raised as the sole child by his mom, Katrin, and his dad, Robert.

Most of Haase’s friends played tennis growing up, which drew him into the sport, and it’s something he’s taken seriously ever since.

“When I was five, I remember my best friend and I we were playing like we were in the French Open Final, and we were really intense with it,” Haase said.

From start to finish, Haase’s friends have played a major role in getting him to where he is today.

“A lot of my friends were playing college tennis and studying in America, and I thought that it would be something that I could do too,” Haase said. “So I made a YouTube video to basically get recruited by a coach.”

There were hundreds of possible universities for Haase to play tennis at in the U.S., but he decided to come to Washburn.

“I had a good feeling about Washburn. What I really liked, my first year on the team, was that everyone on the team was an American. I thought that that was going to really help my language out a lot,” Haase said.

Coming to Washburn has not only been a chance to gain an education or enrich his language skills. For Haase, it allows him to continue to play the sport that he loves.

“I love the game. I love competing one-on-one. I like to compete with a team and compete at a higher level of competition here,” Haase said.

For the past three years, Haase has been one of the driving factors that has raised the bar for Washburn tennis. Along with doubles partner, senior Alejandro Valarezo, Haase claimed third place in the ITA National Cup in the fall of 2018.

“Haase is the kind of player that you go to when you need to come up with a big shot or to win the game,” said David Price, assistant men’s tennis coach. “We call him ‘The Beast’ because he is the guy you want when the game is on the line. He works his tail off and it shows on the court.”

Although he enjoys playing tennis in the U.S., Haase has noticed a difference in the way the game is played here compared to Germany.

“Here in America, it is more team based. It involves more workouts. In Germany, it’s all about hitting and you are more by yourself. I would say it’s better organized here,” Haase said.

The spring tennis season begins this week with the first match on Sat. Feb. 2 in Springfield, Missouri. Keep an eye on Haase and the team as they look to continue the success that they had in the fall.