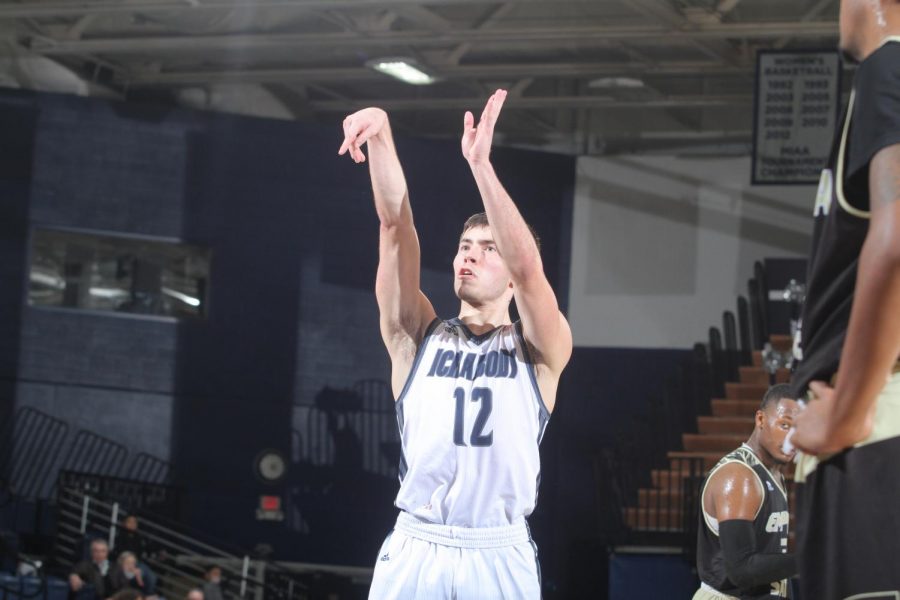 After a tough road loss on Thursday the Washburn University Men’s basketball team returned home for senior night on Saturday to face Emporia State University. Before the game Jace Williams and Will McKee were recognized as it would be both of their final regular season home game. When the two teams faced off back in January the Hornets defeated the Ichabods 91-74, making it the largest loss of the season. Avenging that loss would be key to giving Washburn some momentum heading into the postseason tournament next week.

Early on for the Ichabods it was interior defense that was giving them problems, as Emporia State scored all its first nine points either from the line or in the paint. On the offensive end it was senior guard Tyler Geiman who paced Washburn as he had all year, scoring six points in the first ten minutes giving the Ichabods a 17-14 lead after ten minutes.

The outside shooting of the Hornets got going next, hitting three pointers on back-to-back plays to take a 20-17 lead. That was the beginning of what would be a 10-0 run for Emporia State that coincided with a nearly 5 minute scoring drought for Washburn. On the other end the Hornets guards, Jumah’Ri Turner and Austin Downing, continued to dominate the game scoring a combined 24 first half points. Some late baskets from junior forward Jonny Clausing, who had eight points in the half, kept the game within reach but Emporia State still went into halftime with a 39-25 lead.

“I don’t know that we played as bad as the score indicated in the first half, we couldn’t throw it in the ocean, and I thought they made some challenged shots,” said Washburn Head Coach Brett Ballard.

The Ichabods defense came out of halftime with a different level of intensity, holding the Hornets scoreless for the first 4:32 of the half. The offense began to open up as Geiman was relentless in attacking the basket, scoring six early points and bringing Washburn to within six points. Just like in the first half Clausing came along for the ride, scoring another four points, but it was Geiman who kept them afloat offensively, as he got up to 21 points with just under ten minutes to play.

“They switch five a lot and want you to settle for jumpers, so I thought we did that a little in the first half, so once you get downhill it gives everyone else confidence and it’s easier to knock down shots,” said Geiman on his decision to drive the ball on offense.

Defensively the Ichabods struggled containing cuts from Emporia State’s guards, as the lead grew back up to nine points as the game moved into its final ten minutes.

After only hitting one three pointer the first 30 minutes of the game Washburn connected on three over a two-minute stretch, including two back-to-back by junior guard Jalen Lewis to bring the score to 58-55. The Ichabods defense remained strong, with only the occasional slip up allowing an open shot which kept the game close until the offense could catch up. Down the stretch it was a team effort from Washburn as the offense broke down Emporia State’s defense to officially erase the deficit that was formed in the first half.

Following a layup by sophomore guard Connor Deffebaugh, which tied the game, it was a fast break dunk from senior forward Jace Williams that gave the Ichabods a two-point lead with 2:30 left. Down the stretch the Ichabods got two key three pointers, one from Lewis and another from Geiman to build the lead.

After a free throw from sophomore guard Tyler Nelson put Washburn up 73-70 the Hornets had eight seconds left to tie the game. The ensuing possession resulted in an airball three pointer, as well as a victory for the Ichabods as the twelve-point second half comeback was complete.

“I think we have had a great regular season so I think that we should just maintain this confidence and build off everything we have done in the regular season,” said Jalen Lewis, “Obviously getting it done for our seniors tonight, they sacrificed a lot for us, so we had to get it done for them.”

Next for Washburn will be the first round of the MIAA tournament where they will face Rogers State University when they travel to Lee Arena on March 3.