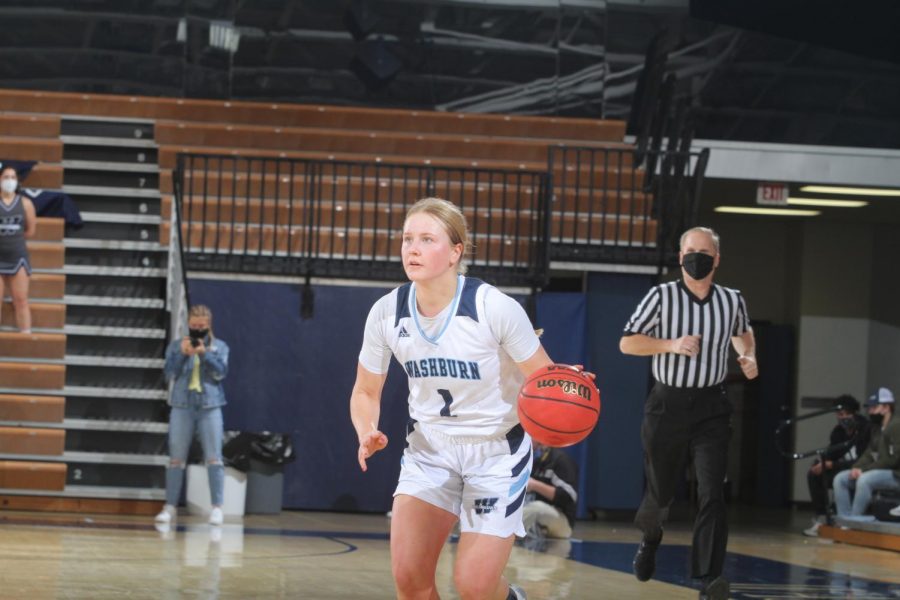 It was senior night for the Washburn University Women’s basketball team on Saturday, as well as the team’s final game before the MIAA postseason tournament. Ending off the regular season with a win would be a challenge as the Ichabods hosted Emporia State University who came into the game with a record of 17-4. In the two school’s matchup earlier in the season Washburn fell short, losing 64-55, they would look to flip the script and finish the regular season at 11-11.

It was a struggle for both teams offensively to begin the game, with the first basket coming from senior guard Hunter Bentley nearly three minutes into the game, giving the Ichabods a 2-0 lead. The 2-3 zone of the Hornets gave Washburn problems early on, resulting in 5 first quarter turnovers.

Later in the quarter the Ichabods were able to find the weaknesses, giving them looks from the outside. They were able to connect on three three-pointers in the quarter, including two from freshman guard Mackenzie Gamble helping keep the game tied at 13 after a quarter.

“Earlier in the season we had a really hard time playing against the zone, so after playing against it a few times we really figured it out and how to pass the ball to each other and get good shots,” said Bentley on adjusting to playing against different defenses.

Washburn continued to fire away from deep in the second quarter, with its first basket coming from the second three of the game from Hunter Bentley, giving the Ichabods a 16-13 lead. On the other end the defense from Washburn was as good as it has been all season, holding Emporia State to 32% shooting in the half.

The Ichabods were able to take some control after a steal and finish by junior guard Nuria Barrientos, giving Washburn a 23-15 lead with just over three minutes remaining in the half. The lead would grow to as large as 11, after the fourth first half three from Gamble before the Hornets would go on a 4-0 to finish the half trailing 28-21.

Emporia State switched to a man-to-man defense coming out of halftime and the Ichabods adapted with ease, scoring the first five points of the half and forcing the Hornets to take a timeout after a three from freshman guard Aubree Dewey.

That would be the first half of a 10-0 run to start the third quarter, giving the Ichabods a 38-21 lead with 6:37 remaining in the quarter. As Emporia State’s offense got started Washburn responded by going inside to freshman forward Lauren Cassaday who had eight points in the quarter, before Gamble, who finished with a career high 22 points, scored five in a row expanding the lead to 22 points. After a run from the Hornets the game would go into the fourth quarter with a score of 54-35.

“I think I just came out a little more aggressive, usually it starts with defense for me so having to guard Jobe (Tre’Zure) I had my mentality straight forward and that kind of transferred into my offense,” said Gamble.

The start of the fourth quarter for the Ichabods was dominated by the connection between Mackenzie Gamble and sophomore guard Macy Doebele who scored or assisted on six straight points together in the first three minutes. On the other end though Emporia State was getting out in transition and hitting shots, cutting the lead to just eight points with under five minutes left.

That is about as close as the game got as Washburn continued to kill clock and wind the game down thanks to offensive rebounding and some timely baskets. A runout basket from Doeblee after a long pass from senior guard Adyson Narber would put the Ichabods 74-64 and that is how the game would end.

“I’m happy for the girls, that’s the kind of game they needed for a while and it’s good to get it against Emporia,” said Washburn Head Coach Ron McHenry.

After finishing seventh in the MIAA Washburn will travel to face the University of Central Oklahoma in the first round of the MIAA conference tournament on March 3.
Edited by: Matthew L. Self