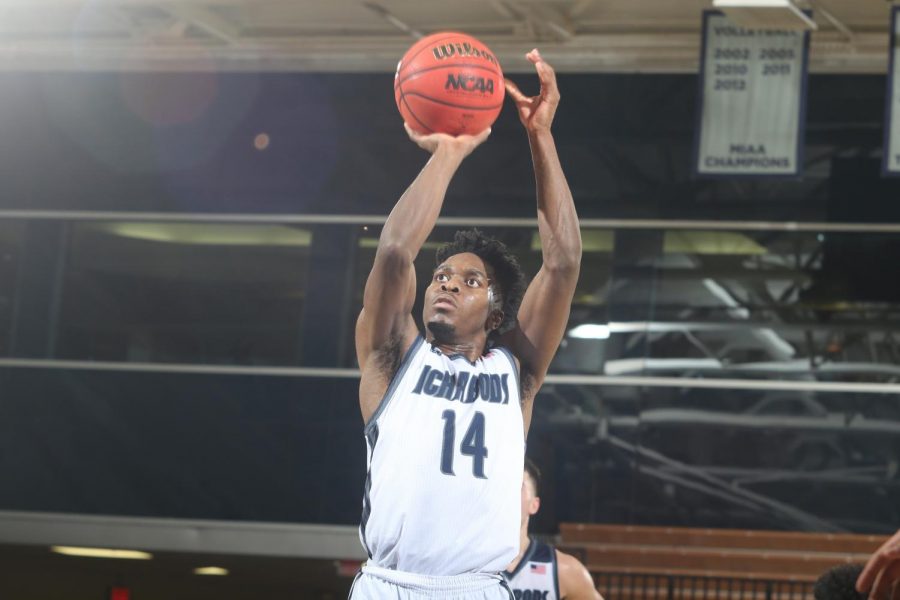 After a winless week featuring two straight losses the Washburn University Men’s basketball team looked to get back to its winning ways on Tuesday evening as they hosted Northeastern State University. It took overtime but the Ichabods were able to take down the Riverhawks on the road earlier in the year, and at this point in the season a win would be even more important.

The game started off at a slow pace, with neither side turning the ball over in the first five minutes. On offense Washburn was effective in its limited possessions, hitting five of the first nine shots, including two each from senior guard Tyler Geiman and sophomore guard Tyler Nelson. On the other end the Ichabods defense was getting in passing lanes, deflecting passes but not coming up with steals. This allowed Northeastern State to tie the game at 21 with just over nine minutes to play in the half after the third three by Troy Locke.

At that point Washburn locked in on both ends, going on a 13-5 run over the next five minutes and were again led by Nelson and Geiman who had nine points apiece. The game finally broke open for the Ichabods over the final two minutes after threes from Nelson and Geiman, along with two triples from sophomore guard Connor Deffebaugh who had 10 points in the half. That late run would give Washburn a 48-32 lead heading into the break.

Just a few seconds into the second half Tyler Geiman, who was working on a triple double after ten first half rebounds, started things off for the Ichabods, hitting a step back three. That would set up what the start of the half would look like for Washburn as they looked to put the game away early. That is what they would be able to do, extending the lead to over twenty points. On defense the Ichabod’s pressure turned up a notch, holding the Riverhawks to just 29% shooting over the first ten minutes of the half.

Down the stretch as the lead stayed above 20 the story of the game for Washburn was Geiman’s quest for a triple double. And once he got close, he would not be denied, picking up assists in short order, with the tenth coming on a three-quarter court pass to junior guard Jalen Lewis with just under six minutes left in the game.

“With ten minutes to go I went to the bench and one of my coaches was like ‘hey you’re going to get one more shot to get two more assists’ so I just kind of did what we normally do,” said Geiman.

The accomplishment was a first in Washburn basketball history, and it took Geiman less than 30 minutes of game time to do it, as he finished the game with 17 points, 11 rebounds and 11 assists.

“I told the guys, Washburn is top ten all time in division two wins, so that means there have been a lot of really good players here, so to be the first guy to do that here is special,” said Washburn Head Coach Brett Ballard.

At that point the Ichabods were able to empty out the bench for the final five minutes of play as they would ease into an 88-73 victory, moving to 15-5 on the season.

“It was nice that we didn’t have to grind through a tough win, we were able to hopefully save some guys legs a little bit, it’s going to be a long week for us, so hopefully that will be advantageous for us,” said Ballard.

Next up for Washburn is a trip to Joplin, Missouri to face Missouri Southern University before heading home for the last game of the regular season on Saturday, Feb. 27.