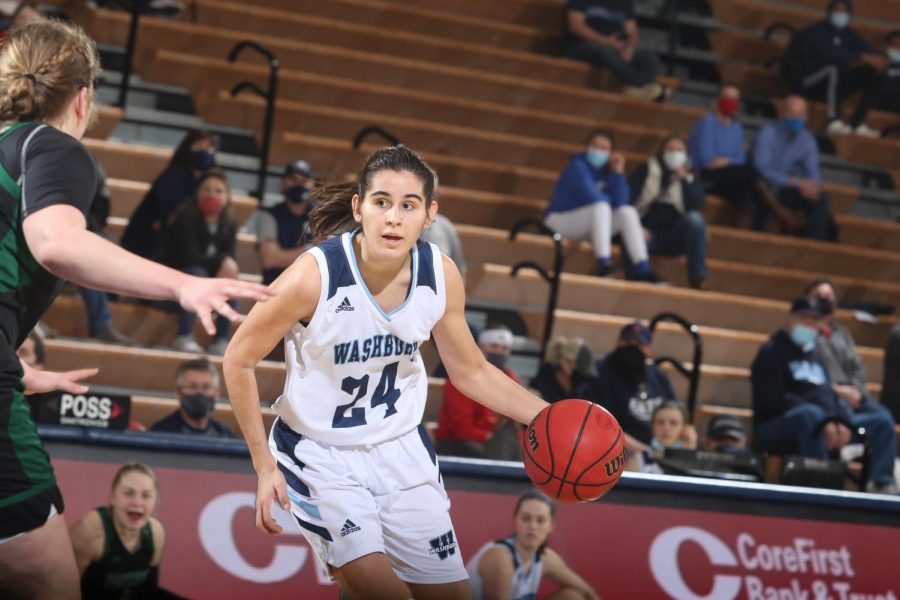 After a much-needed win on Thursday the Washburn University Women’s basketball team tried to make it two in a row on Saturday when Northwest Missouri State University visited Lee Arena. The Bearcats entered the game at 7-11 and it would be the first of back-to-back games against each other where, with wins in both, the Ichabods could get to ten wins on the season.

Offenses for both teams got off to slow starts, with the first basket coming from Washburn via senior guard Hunter Bentley a little over three minutes into the game. Turnovers were also a problem, particularly for the Ichabods who committed four in the quarter. The low scoring was not all the fault of both offenses, as the defense for both teams contested each shot and closed up driving lanes. The difference in the quarter was Northwest Missouri State’s ability to get to the line, giving them a 9-7 advantage after a quarter.

The defensive battle continued into the second quarter with each team trading baskets for the better part of the quarter. Over the final few minutes of the quarter the Bearcats were able to manufacture six points in a row over the course of a few minutes as part of a run that would give them a lead as big as nine. That would be the deficit for Washburn as they went into halftime trailing 22-13.
“Defensively we couldn’t really adjust, because we did a pretty good job in the first half,” said Washburn Head Coach Ron McHenry. “It was just try to get another half like that and clear up the offense basically.”

The adjustments made at halftime paid off immediately for the Ichabods. After forcing two straight turnovers to begin the half they scored 11 points over the next four possessions including five from sophomore guard Macy Doebele. That run would put Washburn ahead 24-22, the team’s first lead since early in the first quarter. After that the offense slowed down for the Ichabods but the defense that had been there the whole game remained, as they forced six turnovers in the quarter and held Northwest Missouri State to just six points leaving the game tied at 28 heading into the fourth.

The beginning of the fourth quarter was a real team effort from Washburn; everyone was either scoring or forcing a turnover or making a pass to set up a teammate. After a jump shot from freshman guard Aubree Dewey the Ichabods took their biggest lead of the game at 35-30.

That lead would slowly shrink until it was down to just one point after a basket by the Bearcats with 28 seconds remaining. A free throw from freshman guard Mackenzie Gamble would put Washburn up two points and after an air ball attempt from three on the other end Bentley would hit another free throw to put the game away and give the Ichabods a 41-38 victory.

“I’m glad to be getting more confident throughout the season because we need to get a couple good wins in so we can get into the tournament,” said Dewey who finished with nine points and four assists.

Both of these teams will face off again on Tuesday February 23, in Maryville MO. A win in that game would give Washburn three in a row, its longest streak of the season, and even up its record at 10-10.