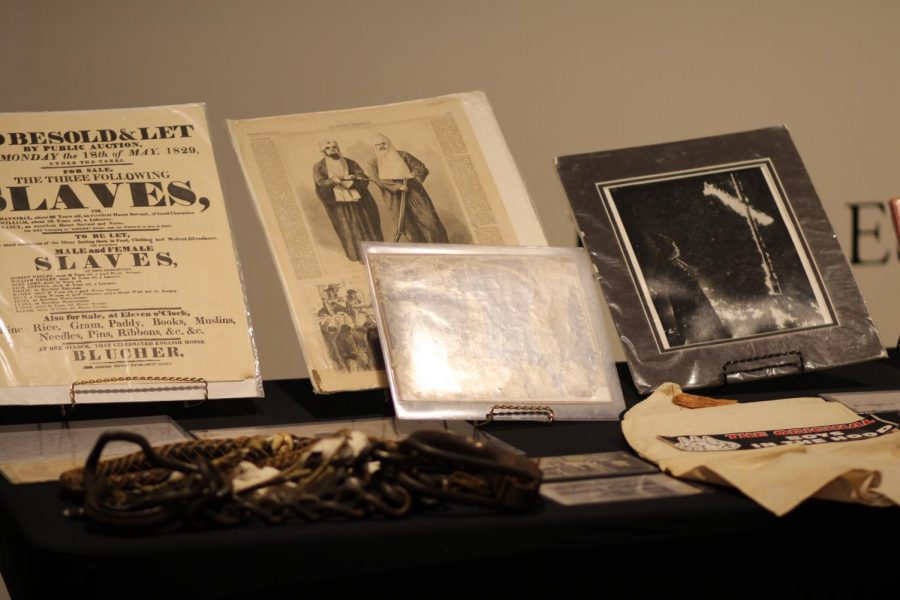 Relics from the past: The mobile museum starts with artifacts from the Slave Era, moving to the Jim Crow South, displaying microaggressions and vulgarity towards African Americans. Each item had it's own story to tell.

Because of these five elements, Dr. Khalid el-Hakim, creator of the Black History 101 Mobile Museum, stated that hip-hop is a unique and inclusive culture, allowing people to be in a creative space without racial boundaries.

The power of hip-hop shows that people such as Queen Latifa and the Fresh Prince of Bel Aire had the power to reinvent their identity in America because of their music. The mobile museum and presentation of over 10,000 artifacts collected by el-Hakim shows the past image of Black men and women, and its connections to deep-rooted racism that is still present today in some parts of our society.

“We want to educate our students to have critical knowledge of themselves and society,” said el-Hakim.

During el-Hakim’s presentation in the Rita Blitt Gallery on Feb. 18, he walked attendees through his first artifact collected in Daytona Beach, Florida, which was a small trinket of a Black child holding a watermelon. Later, he saw that same artifact tattooed on a White man while waiting in line for food.

From this small artifact, el-Hakim continued his search to find books, pamphlets, signs, television shows and other forms of media that demoralize and dehumanize the Black image.

“One thing I have noticed through the years is that white supremisist groups co-opted, culturally appropriated Black culture symbols and slogans, and flipped it into something negative,” said El-Hakim.

An example of this is the historic day called the Million Man March in Washington D.C. held on Oct. 16, 1995 which was the largest nonviolent gathering of African-Americans in American history that promoted unity.

Contrasted to that day, on Nov. 14, 2020, Trump supporters called for the “Million MAGA March” to protest the results of the presidential election, claiming wide-spread voter fraud. This later escalated to what was dubbed an insurrection in the U.S. Capitol on Jan. 6, 2021.

“A confederate flag has never been in the nation’s capital before, not even during the civil war,” said el-Hakim. “Folks who claimed to be patriots, folks who claimed to love America showed us that day where their loyalties lie. That’s not a revelation for us because people have chosen their whiteness over democracy, freedom, justice, liberty and humanity. These artifacts are ugly reminders of that.”

The mobile museum serves as a reminder of lynchings normalized in the face of White spectators, influencing media advertisements from Dove soap commercials to children’s books and television shows.

“People think of history as somewhere in the past but it is very real and is still with us,”said el-Hakim. “It has been a constant. When people say ‘Black Lives Matter’ we’ve been saying that since the first African was stolen from their land and brought here in the holds of slave ships. This is nothing new for us.”

For Isaiah Collier, director of student involvement and development, one of the things that surprised him most in the mobile museum was a small clip of racial stereotyping in the 1920s-40s childrens show: ‘The Little Rascals’.

“In my mind initially, I was thinking about how much I used to love watching ‘The Little Rascals’,” said Collier. “Now to look at it through an adult lens, it is frightening. That was what was put out there for the masses.”

From this Black History 101 Mobile Museum, students from across the country have the opportunity to come to terms with the not so distant past and use it’s knowledge to live differently in the future.