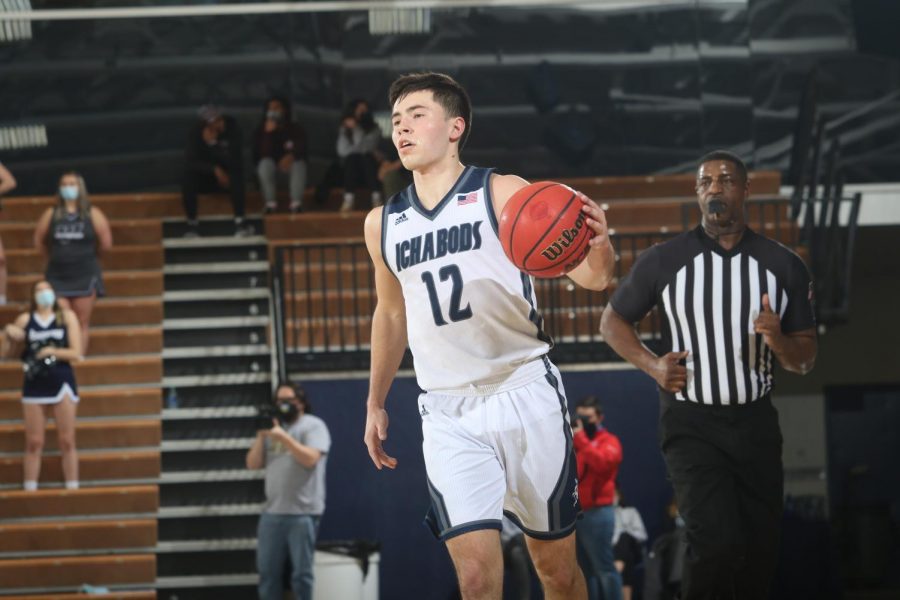 The Washburn University Men’s basketball team was looking for revenge on Thursday night, Feb. 18 as they played host to Missouri Western State University. It was the Griffons who gave the Ichabods their first loss of the season back on January 9 after Washburn had started 8-0. After winning three in a row the Ichabods wanted to avoid another spoiled streak.

Offense was a struggle early on for Washburn, as they started out the game committing four turnovers in just over the first four minutes of the game. The Ichabods were not short for chances, as they hauled in six offensive rebounds in the first six minutes of the game. They struggled to convert, shooting 1-12 over that stretch. On the other end, Missouri Western State started out hot from deep, going 4-8 and giving them a 22-6 advantage with over ten minutes left in the half.

While the offense from Washburn picked up over the first half, the defense continued to give up looks from the outside; the Griffons were hitting them, including four from forward Will Eames, who had 14 first half points. In the final five minutes of the half the Ichabods responded, led as they have been all season by senior guard Tyler Geiman who scored or assisted on ten straight points in what would be a 12-0 run for Washburn, cutting the lead down to four. After a rejoinder by Missouri Western State, Washburn would go into the break trailing 39-32.

To start the second half turnovers stopped the Ichabods from getting into a groove offensively as they were held to just two points over the first three and a half minutes. Those turnovers allowed the Griffons to get easy looks on the other end, growing the lead to as many as 15 points before the first media timeout. The offense started to get more opportunities after that but just like early on the shots were just not falling in part due to the swarming defense of Missouri Western State.

“We just got off to such slow starts both halves, you can’t dig yourself into those holes both halves and then try to come back against a good team,” said Washburn Head Coach Brett Ballard.

As the game moved into its later stages, Washburn was forced to make some adjustments, including a three-quarter court trapping press, which helped cause turnovers and jumpstart fast breaks. Following two free-throws from senior forward Jace Williams, the Ichabods were finally able to cut the deficit under double digits with just over five and a half minutes left.

From that point Washburn turned to Geiman on the offensive end and he delivered, scoring seven of his game-high 24 points over the course of four possessions. Following that the Ichabods were able to get to the line twice in a row and then cut the lead down to just three points after a driving basket from junior guard Jalen Lewis with 48.5 seconds left. On the other end though it was sophomore Reese Glover who hit a three with the shot clock winding down and defense all over him to put the Griffons up six. The lead was too large for Washburn to recover from at that point and they would end up falling 81-77.

“Our expectation here is to win games like that, you know I’m glad our guys fought back but they were the tougher team and especially the first five minutes of each half we didn’t come out ready to play,” said Ballard.

The Ichabods will have a chance to get back in the win column quickly when Northwest Missouri State University will come to town for the two teams’ second matchup of the season.