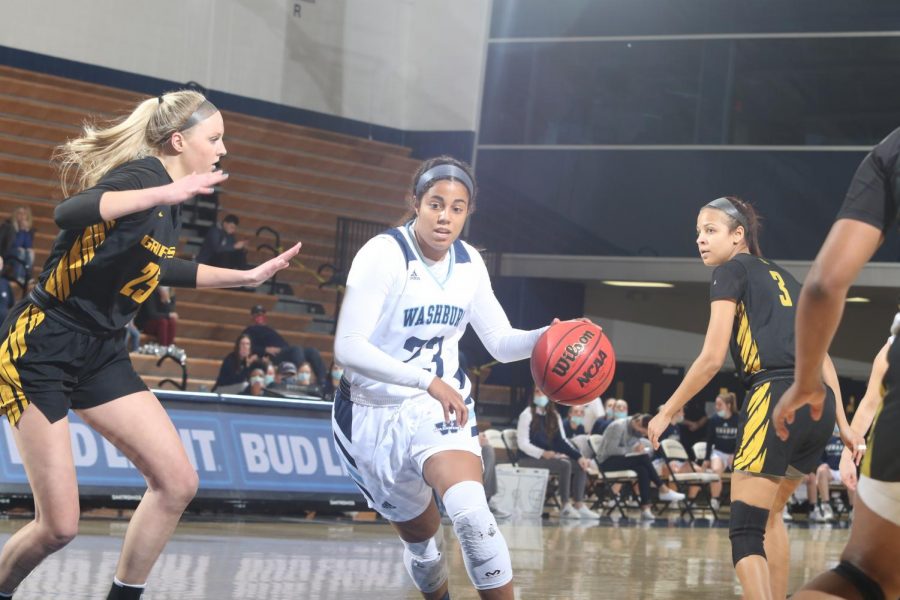 Following two straight losses the Washburn University Women’s basketball team was looking to do whatever it could to get back into the win column. They would have a favorable matchup to do just that as they played host to the Missouri Western State University Griffons. The Ichabods had already faced the Griffons earlier in the season in a game that they won in St. Joseph, Mo. with a final score of 61-49.

Right from the start Missouri Western State came out playing aggressive, deploying a three-quarters court press. After some early turnovers Washburn responded well thanks to strong ball movement from lineups featuring five guards led by senior guard Hunter Bentley who scored nine points in the quarter. On the other end the Griffons used their size advantage to work the ball inside, but turnovers forced by the Ichabods gave them a 16-13 advantage after ten minutes.

Washburn continued to have its way on offense to begin the second quarter either moving the ball right under the basket or getting an open jump shot. This quarter that effort was led by freshman forward Lauren Cassaday who had ten points in the first half on a perfect 5-5 shooting. “Cassaday played a great game, like she has been over the last couple and she takes what the defense gives her, that’s what she does,” said Washburn Head Coach Ron McHenry.

On the other end the Ichabods were able to force Missouri Western State into four turnovers in just under the first three minutes of the quarter, taking them out of any offensive rhythm. Even with a slow end to the half offensively, the early run kept Washburn in the driver’s seat, leading 30-21 after 20 minutes.

“I thought the guards did a really good job of being there on the help-side defense, and we also just pressured the ball really, really well,” said Cassaday who ended the game with 11 points off the bench.

The clean passing that was there for much of the first half did not carry over for the Ichabods to begin the second half as they committed four turnovers in just over the first four minutes of the third quarter. The Griffons continued to move the ball inside, getting to the free throw line eight times in the quarter, but only shooting 3-11 from the field.

Just when it looked like Missouri Western State was going to make the game uncomfortable Washburn responded with back-to-back threes by sophomore guard Hannah Willey and Hunter Bentley to put them ahead 42-30. The Griffons would score two more to make it a two-point game heading into the fourth quarter.

“We just got the ball in the middle, kicked it back out and had to find those open spots,” said Bentley.

For the most part the offenses of both teams struggled to find any rhythm in the early part of the fourth quarter, and while the Ichabods continued to force turnovers they were not able to convert on them at the same rate they did early on.

Fortunately for Washburn the one player who was not struggling to put the ball in the basket was Hunter Bentley who continued to dominate on both ends getting her fifth steal of the game and knocking down two threes in the quarter, giving her 20 points for the game. The second three would put the Ichabods up by 14 with just under 3:30 remaining in the game, and that would be the last basket of the game for Washburn as they would close out a 51-41 victory.

Washburn will go for two wins in a row on Saturday, February 20 when they play host to Northeast Missouri State University as the Ichabods will try to improve its record to 9-10 on the season.