McAfee walks off the Lopers 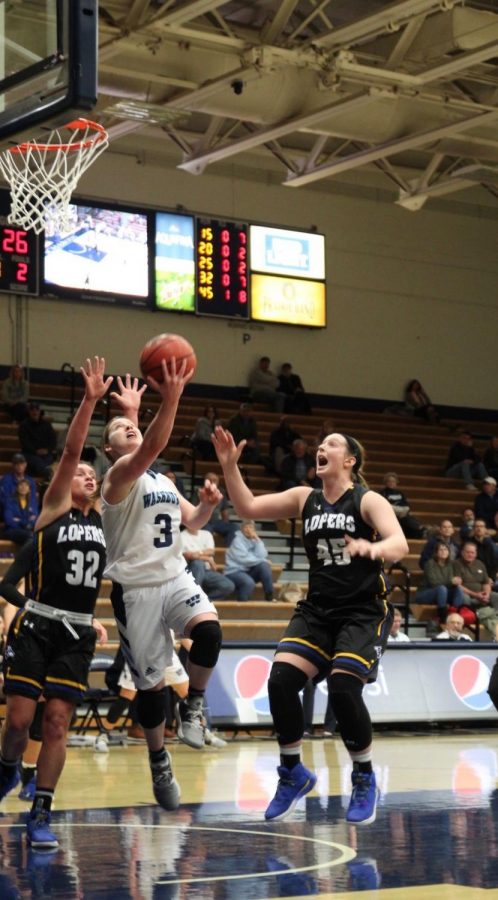 Classes have resumed and with it so has the home portion of the Washburn women’s basketball schedule. They were back in Lee Arena Wednesday night for the first time since the calendar turned to 2019 to face the Nebraska-Kearney Lopers.

It was a slow start offensively for both teams with a combination of careless turnovers and good defense. However, the offense started to come in bunches midway through the first quarter as both offenses began to find their stride. For Washburn, the scoring was balanced with junior guard Reagan Phelan scoring five early points including a three-pointer. It looked as though Washburn would trail by just one at the end of the first quarter, but as sophomore guard Hunter Bentley rebounded a missed free throw she had her pocket picked and the Loper defender converted an easy layup in the waning seconds to make the first quarter score 13-10 in favor of the Lopers.

The second quarter began with Washburn looking to get the ball to the post and use the size advantage that senior forward Nicole Murugarren had down low. They did so with success as Murugarren scored six quick points on turnaround layups. The inside game opened up the perimeter and allowed the three-point shot to start falling as Washburn pushed in front 24-19. UNK struck back quickly with five straight to tie the game at 24. Phelan hit a three with 1:15 to go in the half which would pace the Ichabods to a 27-26 halftime lead.

Phelan picked up in the second half right where she left off in the first knocking down a trey on the Ichabods first offensive possession. The offensive effort remained balanced as Phelan, Murugarren, senior forward Taylor Blue, and junior guard Alexis McAfee all scored in the third quarter. Just like the first half of the game the score continued to remain close throughout as the third quarter ended in a 47 all deadlock.

The fourth quarter was a defensive struggle with not many shots going down for either team. With under five minutes to go the game was still tied, this time at 53, headed into the media timeout. Trailing by two with a minute and a half to go, junior guard Shelbe Piggie came up big knocking down a three to give the Bods a one-point lead. A single foul shot by the Lopers tied the game and no one could break that tie thus forcing overtime.

The separation in overtime came when junior forward Annette Warner worked hard for an offensive rebound and found Bentley for a layup that put the Bods up four. The Lopers battled back within three and then hit a game tying three with 30 seconds left. With five seconds remaining and the ball still outside the three-point line Phelan found a cutting McAfee who reversed the layup and scored to beat the buzzer. After a review, .3 seconds were put back on the clock, but the Lopers couldn’t get a last second heave off and the Ichabods won in thrilling fashion 62-60.

The last second win should inject even more confidence into the team as they pushed their win streak to nine with the win.

Phelan said, “We’re on a winning streak so we’re just really confident coming in, our defense is leading us, and it just comes easy to us.”

Murugarren had a strong performance finding success in the height advantage she had down low on the block.

“I knew my team needed help from the low post, and I didn’t start the game very well, so I just told myself to pick it up and keep going we still have time to play so I did what I’ve been practicing all year and it was successful”, said Murugarren.

Just as UNK would try to make a run and stretch the lead out the Ichabods were able to convert from three-point range, making eight on the night, to keep the game close.

Phelan said, “I think we all did a good job of trying to find the open person and a lot of people just knocked down some big shots.”

Big shots they were indeed as the Bods needed every last point to edge out the Lopers.

Washburn will return to action on Saturday to play host to Fort Hays State at Lee Arena at 1 p.m.