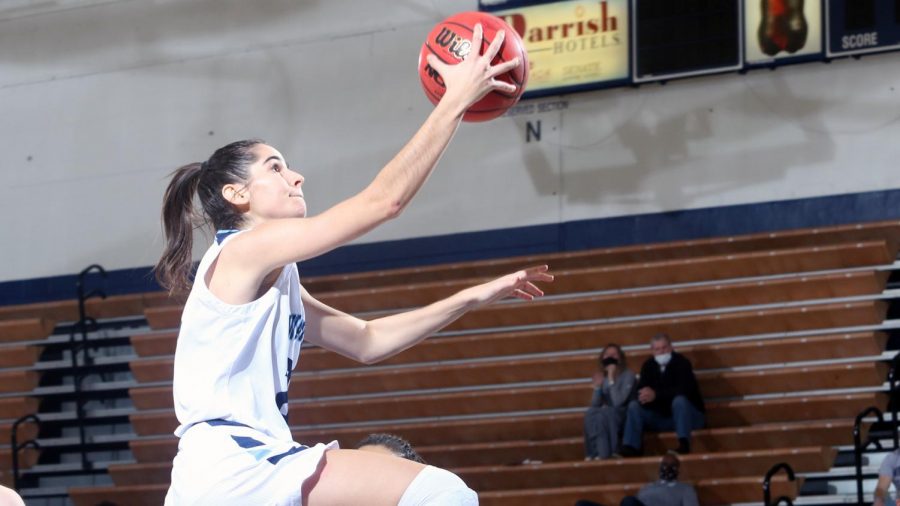 Nuria Barrientos goes in for two of her 14 points in Washburn's 76-66 win over Northeastern State Feb. 6 in Lee Arena. Barrientos recorded her seventh double-double of the season adding 12 boards to go with three steals and two assists.

Trying to avoid its first three-game losing streak of the season the Washburn University’s women’s basketball team faced off against Northeastern State University on Saturday in what would be the first of back-to-back games against the RiverHawks. Injuries had not helped the Ichabods who had fallen to 6-8 on the year but they had a chance to get right against a Northeastern State University team who entered the game at 4-11.

Even with a small lineup for Washburn they were attacking the rim any chance they could get early on, especially senior guard Hunter Bentley who scored a quick five points. The defense on the other end was strong for the Ichabods, forcing the RiverHawks to shoot under 24% for the quarter, which resulted in a 14-8 lead after 10 minutes.

The offense for Washburn started off strong in the second quarter thanks in large part to the play of freshman Lauren Cassaday who scored eight points in the quarter off the bench, and a career-high 15 in the game. Even while Northeastern State’s offense came alive late in the quarter, the Ichabods were able to build their lead going into the halftime break led by Hunter Bentley who had 13 points and knocked down two threes in the quarter helping Washburn to a 37-27 advantage at half.

“I was way more comfortable with what we did in the bench area, not having Abby obviously it thins up our bench but we were just throwing people in there,” said Washburn Head Coach Ron McHenry, “And some of them came in and did a nice job.”

The offense was a struggle for the Ichabods coming out of halftime and the leading scorers for the RiverHawks were beginning to make their presence felt. That scoring along with full-court pressure helped Northeastern State go on a 10-0 run and cut the deficit down from 12 to two with just over six minutes left in the quarter.

“Making sure that, yeah we know they are going to go on runs, but not letting us get into a big drought like we have been was really key,” said Hunter Bentley who scored 27 in the game.

Washburn was able to respond shortly after with strong post play from Cassaday and drives from junior guard Nuria Barrientos who scored six of her 14 points in the quarter. With a 6-0 personal run from Hunter Bentley to end the quarter the Ichabods were still in control 57-48 going into the fourth.

Both teams were trading baskets to begin the fourth quarter with Washburn always staying eight to ten points ahead.

That was the case until the RiverHawks were able to cut the lead down to five points after a basket from their senior guard Cenia Hayes who scored 20 in the game.

That would be the closest Northeastern State would get as five-straight points in the final two minutes including a three-pointer that put the Ichabods up 70-61. From that point on it would only require free throws for Washburn to leave with a 76-66 victory.