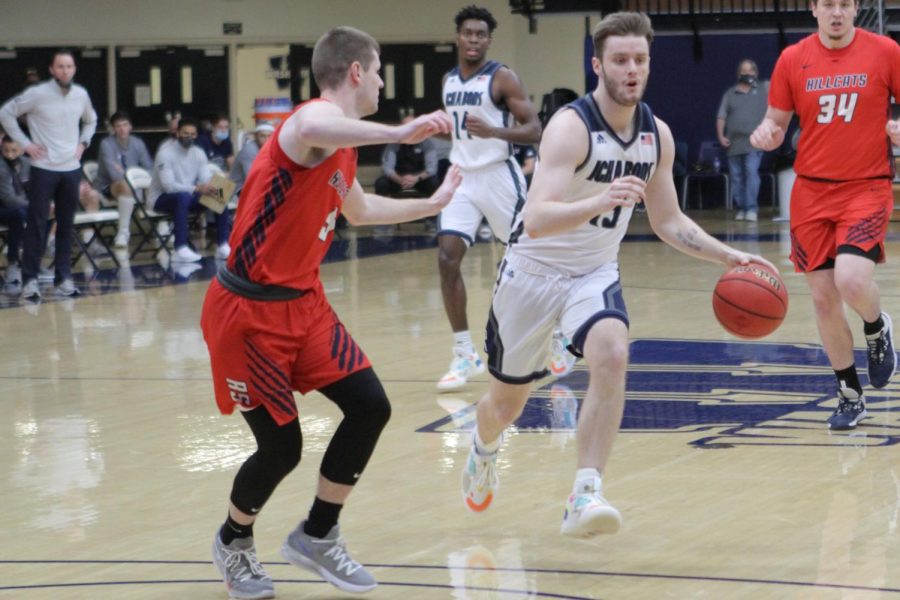 Freshman guard Levi Braun leads the break against Rogers State. The Ichabods won the game 88-77 over the Hillcats. Braun leads the MIAA in 3-pointers per game and 3-point field goal percentage. He has hit 49 3-pointers this season.

For the first time this season, you could say that the Washburn University Men’s basketball team was in a slump, losing two of its last three entering the Feb. 4 game against Rogers State.

The Ichabods had already beaten the Hillcats when they traveled to Claremore, Oklahoma, in December. A win would get Washburn back on track and improve its record to 12-3 on the year.

It was a struggle early on offensively for the Ichabods, as they scored only four points in the first six and a half minutes of action. While Rogers State was not lighting it up on the other end, they were able to take an early lead by using its size advantage to post up and drive to the basket. That disadvantage plus four turnovers put Washburn in a 14-9 hole after ten minutes.

The Ichabod offense could not be held down for long as they finally found its groove with around seven minutes left in the half. Over five possessions, Washburn scored 13 points that were started off by two threes by freshman guard Levi Braun and capped off by back-to-back dunks by senior forward Jace Williams. That stretch brought the Ichabods back, but it was threes by Braun, who had nine in the half, and junior guard Jalen Lewis that gave Washburn a 35-32 advantage heading into halftime.

Coming out of halftime, the Hillcats were clicking on all cylinders as they scored the first nine points to take a quick six-point lead and force the Ichabods to take a timeout in the middle of it.
“I probably can’t repeat some of the things that I said, but you know we just came out flat,” said Brett Ballard, Washburn head coach “I didn’t like our energy or our focus, so I was just trying to get those guys refocused.”

Senior guard Tyler Geiman took it upon himself to erase those mistakes as he scored 12 in a row for the Ichabods, retaking the lead 48-44. Even when Rogers State would respond, Washburn continued to play offense led by Geiman, which gave the Ichabods a 62-54 lead with just under 10 minutes to play.

“Coach just got on me to kind of play with it a little, look to reject, and really attack those bigs and those ball screens and I just kept going at them and it kept working,” said Geiman who ended the game with 29 points.

Down the stretch, it was the seniors who controlled the game for Washburn along with Braun who contributed with a couple of three-pointers. With the defense keyed in on Geiman, it was senior forward Rathen Carter who scored six-straight points to put the Ichabods up 11 with under four and a half minutes left.

Just when it looked like the Hillcats might be making a run, it was Levi Braun who connected on a three with a defender draped on him and the shot clock hitting zero. That shot put them up 81-74, and Washburn would go on to ice the game with free throws and secure an 88-77 victory.

“I’m really really really proud; I mean we are extremely beat up, we have limited bodies and limited size. I think that Rogers has a nice roster and is well-coached, and we found a way to get it done, I thought it was a great win for us” said Ballard.