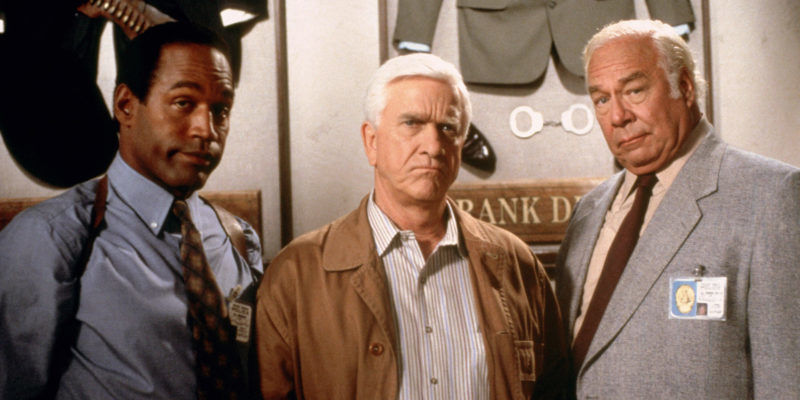 A Comedy Masterpiece: "The Naked Gun" is a wonderful film, thoroughly enjoyable and it absolutely deserves all the love it gets with the crucial element being Leslie Nielsen's performance as Frank Drebin. Pictured are Police Squad members Nordberg (O.J. Simpson), Lt. Frank Drebin (Leslie Nielsen) and Captain Ed Hocken (George Kennedy).

“The Naked Gun: Files from the Police Squad” is without a doubt a deadpan comedy classic. Directed by David Zucker and starring the late comedy icon Leslie Nielsen, this movie has a huge following, and for good reason.

The plot revolves around Frank Drebin (Nielsen) a Lieutenant for the LAPD, part of a special group called Police Squad. The squad is put in charge of assisting with the security of Queen Elizabeth II who is visiting Los Angeles, and while this is going on, Frank must clear the name of fellow cop Nordberg (OJ Simpson) who was found near death, and also framed for a connection to heroin dealing.

This leads Drebin on a wild goose chase across Angeles, accompanied for the most part by Jane (Priscilla Presley) Frank’s love interest, and Captain Ed (George Kennedy), a friend and colleague of Frank’s, trying to unravel a conspiracy involving shady businessman or politician type Vincent Ludwig (Ricardo Montalában).

What really makes this film special is Nielsen. Before going into projects like Police Squad and “Airplane,” Nielsen was an actor that took serious, no nonsense roles. That translates perfectly to having a starring comedy role as his delivery is phenomenal, and totally deadpan. He carries this film in the way Arnold Schwarzenegger does with his action films. Nielsen’s delivery and performance is so good, nobody else can really replicate or replace his charm and charisma.

“The Naked Gun” is stuffed with so many funny moments. It has moments of slow burn movie-spanning gags, like Frank repeatedly crashing his car, and most importantly, it mixes physical humor and dry wit with a countless amount of quotes and one liners that are as great out of contact as they are in context.

OJ Simpson being in the film definitely shows its age. While jarring and problematic, he really isn’t shown much, but when he is he is given the kind of material that works so you feel guilty when the jokes land. I spent much of my time with Nordberg’s scenes trying to forget who was actually being filmed, but I still found enjoyment out of them. Much of the discomfort I had with seeing Simpson can be forgiven with Nielsen and his wonderful Drebin-isms.

I’m ashamed to say I only just now watched the entire “Naked Gun” trilogy, but it is abundantly clear why the movie and Leslie Nielsen by extension are so well loved and revered by many. It has so much charm to it that it’s the type of movie to put on if you are having a bad day, and you can still laugh. It brought me back to my childhood, spending days watching comedies like “Wayne’s World” and “Austin Powers,” and at the end, there is no question that I would have revered this movie as much as everyone else does. It makes me long for a time when theaters weren’t dominated by the next Kevin Hart and Dwayne Johnson buddy film, and I really wish I discovered it sooner.