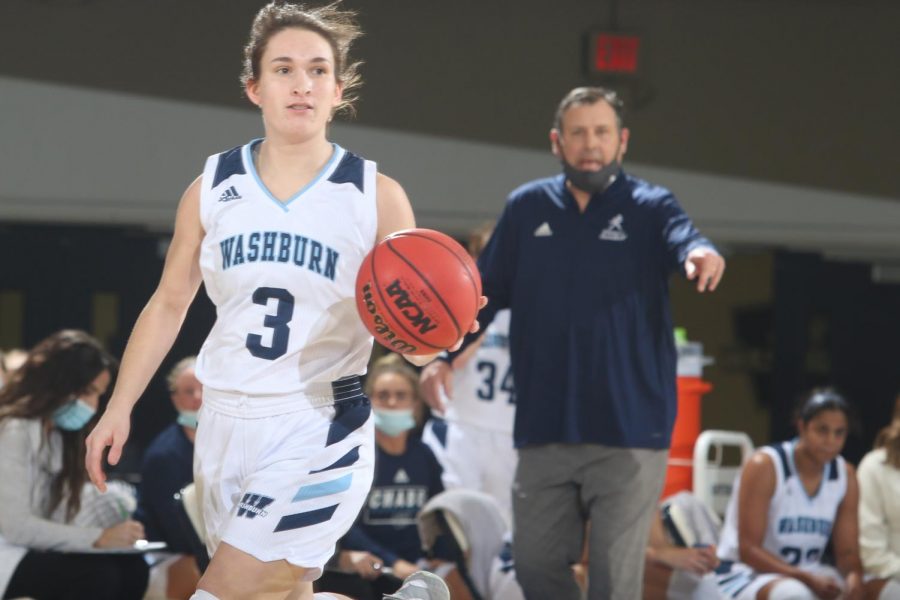 Freshman guard Aubrey Dewey brings the ball up the court against Northeastern State. Dewey is averaging 6.5 points per game starting 9 of 13 contests this season.

Following a close loss on the road to Central Oklahoma, the Washburn University Women’s basketball team welcomed the Rogers State Hillcats to Lee Arena on Thursday. The Hillcats came into the game losing their last two and had fallen to 4-10 on the year overall. This is the second time this year the two teams have faced off, with the first coming in December in a game that Washburn won handily on the road, 76-61. The Ichabods would try to repeat that success and get back to an even 7-7 on the season.

It was a slow start for both teams offensively as turnovers kept both teams from getting into a rhythm. The driving from Washburn’s guards gave them the advantage until sophomore Hannah Willey knocked down the team’s first three to put them up 12-4. Turnovers continued to haunt the Ichabods as they committed seven in the quarter allowing the Hillcats to close the quarter on a 6-0 run.

While winning on the scoreboard after the first quarter there was a major loss when forward Abby Oliver exited the game with a hand injury after only four minutes and would not return.

“Abby is an energy-bringer and that is something obviously you could tell we lost immediately,” said Brette Herber, Washburn assistant coach. “You lose Abby, and Abby brings that energy and tenacity and that was big. Now we have to grow from that because there is a good chance we are not going to have her back.”

Rogers State continued its run to begin the second quarter, scoring the first four points after turning over Washburn on its first two possessions. Midway through the quarter, the offenses picked up for both teams, including a personal 5-0 run from freshman guard Aubree Dewey but after that nothing was working for the Ichabods. On the other end, the Hillcats completely flipped the switch and shot 10 of 12 in the quarter including a perfect 3 of 3 from deep. That type of shooting combined with seven more turnovers from Washburn gave Rogers State a 33-22 advantage at the half.

“When you let someone score 23 in a quarter you’re in big trouble, especially when you can only score 10 in that quarter,” said Herber.

The Hillcats came out of the break as hot as they entered it, scoring seven points in the first 2:41 of the quarter and extending its lead to 14 points. Once the shooting settled down the Ichabods were able to start making up ground thanks in large part to their defense which did not allow a point for the final 5:02 of the quarter. That effort allowed Washburn to cut the lead in half as they trailed 42-35 going into the fourth.

The beginning of the first quarter looked promising after four straight free throws from senior guard Hunter Bentley to put her in double digits for the game as she ended with a team-high 14 points. The offense stagnated after that but the defense kept the game within reach as it moved into the final minutes.

Down the stretch the Ichabods continued to make crucial plays, scoring six-straight points to bring the game within one. After a free throw from Rogers State, Washburn ran a play out of a timeout for Hunter Bentley and she came through, knocking down a three and giving the Ichabods a 50-49 lead. Unfortunately, on the other end, the Hillcats were able to draw a foul that put them ahead. The Ichabods were not able to respond, and Rogers State closed out  a 53-50 victory.