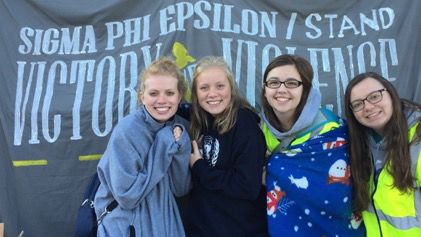 Zimmer makes impact: Katie Zimmer (far right), the president of STAND at Washburn, has enjoyed planning and leading events as a member of STAND. As pictured, they partnered up with Sigma Phi Epsilon last year to host a 5K fundraiser against domestic violence. Pictured (left to right) are Joyce Johnson, June Johnson, Katie Wade and Katie Zimmer.

Katie Zimmer, senior business finance major from Beloit, KS, started off her freshman year feeling home sick, but this changed when someone recommended that she join STAND, the student organization of the Women’s and Gender Studies department. Zimmer decided to attend a meeting and quickly began to feel a sense of family in the group. Coming from a small town, Zimmer hadn’t heard about the types of things STAND fights against, such as domestic violence, sexual violence and gender inequality.

“I was just mind-blown,” Zimmer said.  “There was so much work that needed to be done on campus, and I really wanted to be a part of that.”

Throughout Zimmer’s involvement in STAND, she has served as the president of the organization for two years. Zimmer realized that she wanted to lead the organization after attending the United Nations Commission on the Status of Women as a delegate with campus advisor to STAND, Professor Sharon Sullivan, chair of the theatre department.

“I wanted to come back and give what I had learned,” Zimmer said.

Since then, Zimmer has done just that by leading projects, such as last year when she helped create the books with poetry from sexual assault survivors and other students at Washburn and made them available to everyone on campus. When leading events and pushing for change, Zimmer has focused more on solving problems that pertain more to Washburn and the surrounding area rather than the kind of issues that other similar groups are trying to tackle at universities across the nation. Zimmer’s favorite event that she helped lead as president was the 5K fundraiser where STAND partnered with fraternity, Sigma Phi Epsilon, to raise funds for the Kansas Coalition Against Domestic Violence.

“Partnering with a fraternity was really awesome to see now-a-days,” Zimmer said. “We’ve talked with Sig Ep about doing a 5K again, but that might be next year too. We’re trying to build our organization back up, so it’s hard to do big projects right now.”

Over the past few years, Sullivan has witnessed the personal growth that Zimmer has made throughout her presidency and membership in STAND.

“I have seen Katie grow so much,” Sullivan said. “Especially in her confidence and abilities. She’s an excellent leader and very collaborative. She believes that everyone brings something valuable to the table and I greatly enjoy working with her.”

After graduating, Zimmer plans to stay connected with the Washburn community and give back whether that be through time or funds to help give the necessary resources to assault survivors. She also hopes to see STAND grow further as an organization on campus and see more Washburn students take advantage of the ‘once in a lifetime’ experiences that she has been able to do throughout her college career.

“In STAND, I have gained so much,” Zimmer said.  “Leadership skills is a huge one, but I have also developed professional relationships with others throughout the Washburn community and also the Topeka community.”